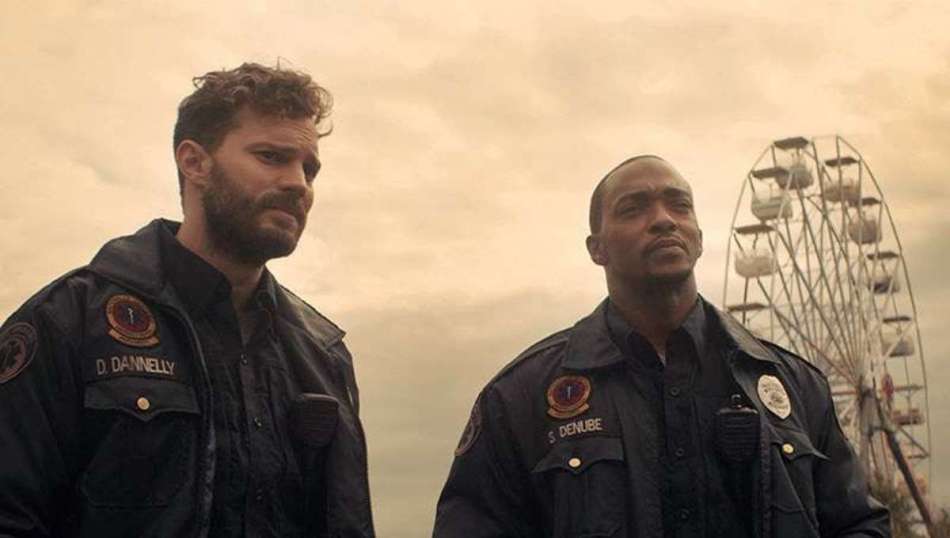 “Time is a lie” reads the writing on a wall in the home of a drug addict. Ambulance technicians Dennis Dannelly (Jamie Dornan) and Steve Denube (Anthony Mackie) are there for a job, trying to revive someone from an overdose and dealing with a bizarre stab wound in the other room. It is here that they will find another empty packet of “Synchronic”, a designer drug made to imitate DMT that has led to illness and deaths in many of the young people who used the drug. Directors Justin Benson and Aaron Moorhead, off the back of their breakthrough indie success The Endless, return with stars like Dornan, Mackie, and Katie Aselton headlining (a change of pace from Benson and Moorhead themselves starring in The Endless) and yet another high-concept science fiction horror film. As in their prior work, the ideas and ambition sometimes elude their grasp and budget, but Synchronic is a fascinating, thrilling, and poignant look at time and death.

In the opener, Synchronic depicts the effects of the drug on a pair of users, seemingly transporting them in time and having tangible effects on them as they return to the present (such as a snake bite). For these two veteran EMTs and long-time friends, it is just another deadly drug until another call reveals Dennis’ 18 year old daughter Brianna (Ally Ioannides) took it and disappeared. Not only is Dennis desperate to get her back, but it places further strain on his marriage to Tara (Aselton). However, a recent brain tumor diagnosis for Steve leaves him in a unique position to help as the drug impacts the pineal gland and with his appearing similar to a teenager’s, he thinks he will be able to track her down, wherever she may be. It is a fascinating film, bending time into a truly flat circle – the designer of the drug describes it as a turntable, landing on a record where all times in a song exist, just waiting to be played – and one that Benson and Moorhead execute wonderfully. Transporting in time as Steve tries to figure out and study the drug’s effects in order to more effectively track Brianna, Synchronic can be quite the wonder. It embodies all of the appeal of science fiction while offering a historical horror edge that makes it genuinely engrossing and terrifying. The mystery of what is awaiting him each time he takes the drug and the peril of racing back to the present has one’s heart in their throat.

Synchronic plays up the dread of what could be awaiting on the other side very well with its depiction of violence and harm coming to prior users before Steve. Snake bites or sword wounds being two of them and even his first experience with a conquistador leaves one reeling. However, where the film overreaches comes in his experiences. The information he learns is fascinating, the terror is palpable, and the effects are impressive as he drifts in and out of time as though he were a ghost. Set in New Orleans, the film explores the city from millions of years ago to the days of swampland to, yes, the days of slavery and Jim Crow. Given that Steve is Black, the problem is clear for him as the film runs through every cliché of the Black experience in those times while giving him jaw-droppingly terrible dialogue – such as “I’m your slave, I’m your fuckin slave,” said to a racist white man during a war, said in a ploy to get him to not shoot. It is hard to avoid the reality of New Orleans’ racist roots and exploring the history of the region is only natural, but introducing content so heavy and going nowhere with it leaves one wanting. Racism and inequality never comes back with him to the present nor does the film attempt to grapple with it, emphasizing safer thematic topics for Benson and Moorhead. By the end, most of his experiences bring him back to racially significant periods that are left firmly in the past, glossed over in the sweep of the overall experience.

Despite this, Synchronic excels when it comes to Mackie and Dornan as well as in the rich emotion it explores. Facing down a terminal illness, a fraying marriage, a missing daughter, and their tight bond as friends, it is clear that this is going to be an emotional ride and Synchronic handles it with grace, never feeling cloying. Life and loss, staring down the end as one drifts out of one plane of existence onto another gives the film considerable pathos that is poignantly depicted. Seeing them reaching out for another and Steve sacrificing everything he can in order to help Dennis and Brianna epitomizes the considerable swell of emotion in the film. Mackie and Dornan having a genuine rapport with one another ensures that the film never hits a false note. Whether fighting, reminiscing, or dealing with the fact that Steve is soon to die, the pair capture consistently authentic emotion. They feel like old friends, fighting like cats and dogs over nothing and then just moving on without a word, comfortable in the knowledge they love one another and are always there for each other. As the film opens with them going through their daily routine at work or as the science fiction side ramps up, this strong foundation of friendship never leaves Synchronic. Some plot beats may feel contrite and expected, but the pair not only make them believable but ensure that they  make an emotional impression no matter how familiar the story can become. Mackie, for his part, does well in exploring time and space with a matter-of-fact and scientific approach with his charisma paying dividends for the film. It is the clearest improvement from The Endless for Benson and Moorhead as Mackie possesses a classic movie star appeal that consistently elevates Synchronic whenever it falters.

Imperfect but captivating and imaginative, Justin Benson and Aaron Moorhead’s Synchronic continues the duo’s refreshing takes on science fiction. Taking a classic time machine set up and layering it into a study of friendship and the drug crisis gives this film the spark it needs to succeed. Jamie Dornan and Anthony Mackie impress in the lead roles – particularly Mackie – while the strong effects and historical touches help bring this otherworldly story to life.