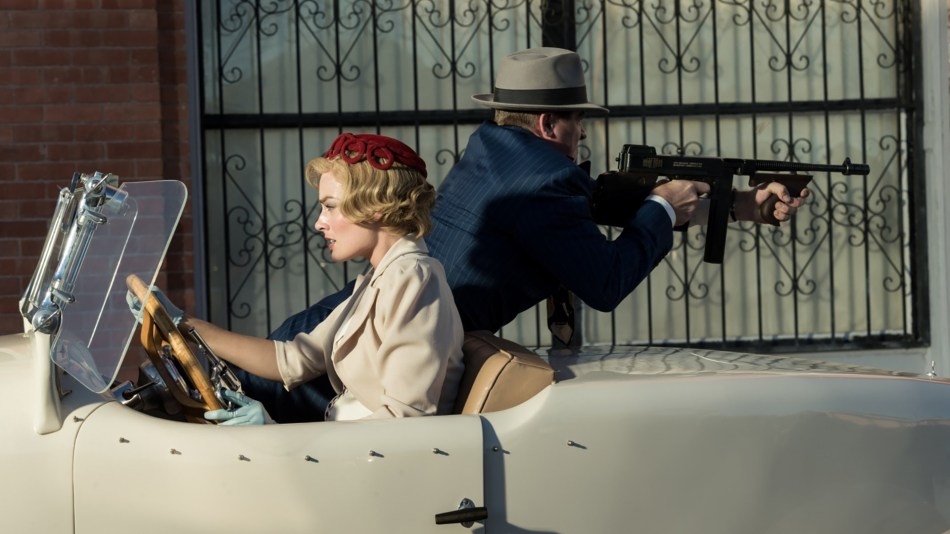 Directed by Miles Joris-Peyrafitte, Dreamland is a film based around myth and legend. It is narrated by an older Phoebe (Lola Kirke) as she tells her half-brother’s story, as best she knows. One can feel the story caked into this land, as locals tell of how local boy Eugene Evans (Finn Cole) ran off with a wanted fugitive. As with the famed bank robbers of the 1930s, Allison Wells (Margot Robbie) could very well be in that same category. Her beauty juxtaposed by her supposed brutality. Above all, legends emerge out of this desperation sweeping across the midwest. The Wells family is basically the Evans family. Allison’s kin lost everything a year prior, prompting her turn to a life of crime and her blood-soaked romance with Perry Montroy (Garrett Hedlund). It was the only way out; a chance to make something, even if only for a little while. She is relatable and attractive, both of which sucker Eugene into helping her. Her promises of riches and a good time at her side are too much to turn down for this young man. Perhaps he makes something of himself. Perhaps it ends in sorrow. No matter, he wants to experience something instead of just reading about it in the dimestore magazines he steals.

As its title suggests, Dreamland is a film built around dreams. Even as its action climaxes, it cuts back to visions of the ocean and a way out for Eugene. His birth father ran out on the family years ago, having had dreams of his own, fearing a curse on this land. As it turns out, he may not have been too wrong as a drought has worn on for nearly a year and family farms are wiped out all across towns. The barren landscape lashes out with breathtaking dust storms consuming homes and throwing debris all about. It is only natural Eugene turns to those visions of his father at the beach on the Gulf of Mexico or to stories of bank robbers as an escape, but now he has a chance to make some of it real. Maybe he can get to the beach, too. Maybe he can make a break for it with the cops hot on histail. It is a coming of age story, of sorts, with this young man experiencing love for the first time and getting a shotgun lesson on the realities of his dreams. It is a world of sorrow and while the myths may arise out of a hope for a better place, they often have little basis in reality. Joris-Peyrafitte excels in turning Dreamland into an examination of this hard-to-accept truth. ‘Dreamland’  is a land that was dreamed about as families saw the Oklahoma territory as their fresh start. Dust storms are a harsh blow, a realization that perhaps this dream was a nightmare, particularly for Eugene’s family. Unfortunately, Eugene’s own dreams of Mexico or robbing banks are just as unrewarding as racing to claim one’s plot of land in a new territory.

While these dreams and the harsh realities take center stage, Dreamland finds little else to propel it forward. It is a very thin film, having a few good ideas and some clear inspiration from Bonnie and Clyde or Badlands to serve as a guiding light, but it has little else up its sleeve. These dreams are a good start, but watching a romance build between Eugene and Allison or watching the build up to him leaving in the first place never strikes a chord. It is sluggish and underthought, walking through touchstone moments of better Depression-era or bank robber films. Its romance lacks spark and chemistry, more successful when it presents Allison as a flirt who does not love Eugene but does enjoy his company. As it gives into the dream of being with this beautiful and headstrong criminal, Dreamland falters. It is a film with a lot in its favor and an overarching idea that proves engrossing, but it never knows how to fill those middle portions. It throws just about anything at the screen, only for it all to fizzle out. Eugene’s friend helping him search for Allison before moving to California, his stepfather George Evans’ (Travis Fimmel) job at the sheriff’s office, or even the desperate search for the runaway Eugene undertaken by George are all flat. The dialogue is too modern and cliché to have any snap or period authenticity, while the dramatic inertia is all spent elsewhere. The excitement is with Allison, trapped in the Evans barn as she tries to heal up before hitting the road again. Whenever it focuses on her, such as a close encounter with young Phoebe curiously exploring the barn or in flashback as the truth of her recent robbery becomes clear, Dreamland has a spark about it with great suspense and tension. Unfortunately, these moments are brief and infrequent, turning instead to the more vanilla Eugene as he tries to find himself in this sea of despair.

Margot Robbie makes the most of what she is given, consistently elevating this possibly thin character into a living, breathing human. Her energy and vitality as she swings her legs off of the teller line and jumps back down, ignoring the pleas of the desperate employee is pure distillation of movie star presence. She commands the floor, a shot of charisma any scene she enters and a perfect fit for a hiding convict trying to win over a young man into helping her. Allison twists him into knots with the batting of her eyes, while Robbie gives depth to even those clear manipulations. One can feel her pain speaking about the family she lost to these dust storms and financial ruin. The look in her eye whenever Perry’s name comes up or as she fights with Eugene to get him to trust her captures a genuine authenticity. Allison is haunted by demons of guilt and grief over her recent exploits, one of which ended with a little girl killed. Robbie evokes this pain throughout. Though she may try to run, it is that day that will stalk her for the rest of life. The editing highlights this, jarringly cutting back to that day as she has a stand-off with young Phoebe, silently reliving what happened the last time she saw a little girl. Contrary to the similar cross-cuts to oceans for Eugene, these cuts to Allison’s final heist with Perry offer a fatalistic edge. There is no future for her or hope for a better place. Her life is in the past. Killing an innocent has sewn her fate and until then, she is merely delaying the inevitable. Robbie captures this resignation, having a hard time speaking of that day or trying to empathize with Eugene on the horror of killing, struggling to get the words out with guilt-ridden eyes and tears. It feels authentic, lending the film great depth and humanity that is otherwise lacking elsewhere in the script. Though not her finest film, Margot Robbie brings her A-game at all times in Dreamland.

Dreamland is not a bad film, but it does fall short of its potential. Compared to other 1930s films, especially those about bank robbers, it falls considerably short. It is beautiful with great effects and a wonderful setup as it follows this young boy through the terrible drought affecting his family’s land. Margot Robbie is terrific, exuding all of the style and flair needed for a classic bank robber with big money on her head. Told as a modern day myth and filled to the brim with dreams, Dreamland has big aspirations and many successes but does not quite hit the mark.