For decades, Federico Fellini enthralled audiences with his evocative visual flare. Even so, one would be hard-pressed to make the argument that Fellini’s films fell under the trap of being more style than substance. The sprawling La Dolce Vita is picturesque yet chronicles a week in the life of a man plagued by existential thoughts. The mesmerizing 8 1/2 wows with visual splendor yet is equally compelling for its narrative experimentations. During his lifetime, Fellini achieved great recognition for his work and today his films continue to captivate audiences, beckoning this Retrospective on his films.

At the beginning of Amy Heckerling‘s visit to the closet in Criterion’s popular video series, she holds a copy of I vitelloni and says “This is Mean Streets before Mean Streets,” and while watching the film, the influence on Mean Streets is evident and apparent. There are the same themes of being an adult but still feeling disaffected and pressure to mature and grow-up. Characters would much rather party, smoke cigarettes and pursue women while running away from and ignoring the problems and issues within their lives. They tend to shirk responsibility, often asking their family members for money to support their reveling. Yet, I vitelloni is a starkly human film, examining the personalities, lives, and motives of each protagonist. You get a look inside the home life of each character and you begin to understand the family dynamics at play in each household, and that helps connect you with the characters and ultimately connect with the film. As each character begins to mature and cope with their complicated emotions and consequences of their actions, you begin to empathize with the provincial tragedy that is their lives. The film doesn’t close on a dismal note; it was more optimistic and hopeful as one character decides to leave their small town, but you wonder how each protagonist decided to proceed with their lives and why they never made it out themselves. The comparison of Scorsese’s Mean Streets to I vitelloni is an apt one due to the themes of grappling with maturity, consequences of actions, and each ending with a tragedy yet Fellini’s film is more humanistic as it encompasses the incredibly wade range of human emotion and personalities within this group of friends. 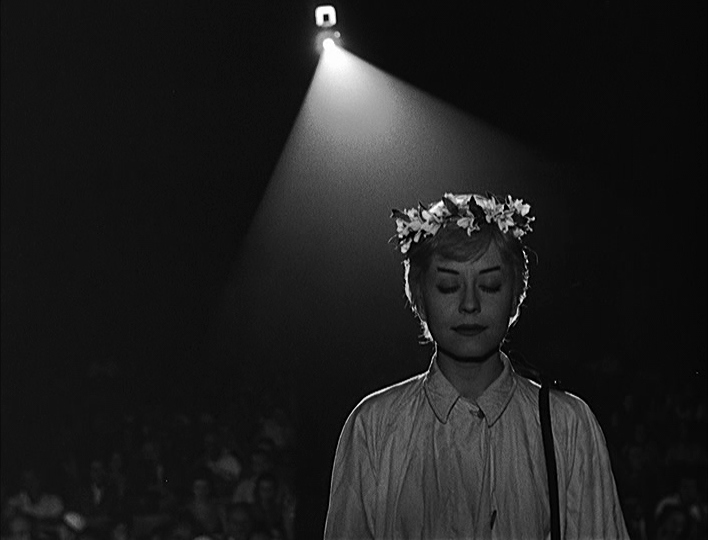 I wasn’t quite sure what to make of Federico Fellini’s Nights of Cabiria as I watched it. Having only hazily remembered seeing the Italian auteur’s most iconic work, 8 ½, some years before, I came to the film almost completely unprepared, with only the loosest of impressions of what it was about and with no idea whatsoever of what genres or themes it encompassed. Even so, with only the bare minimum of context regarding the film’s fame and plot, I found myself drawn in, ever so slowly, by its performances, warmth, and resolute humanism.

The film centers and blossoms around the life of its titular character, Cabiria (Giulietta Masina), a boisterous, sarcastic young woman who has just been abandoned by a man she believed to have loved her. Not just abandoned, mind you, but robbed and pushed into a river, only barely avoiding a fatal drowning. At nights, Cabiria works as a prostitute, but just about all the time we spend with her is occupied by her lonely walks around the city of Rome, as she runs into various sights of wonder, humor, and sadness alike.

Above all else, it’s Masina’s performance that makes the film. At once loudly funny, vividly expressive, and ultimately poignant, Masina brings a pathos to her role that finds her character lodged somewhere between the humorously pathetic exploits of Chaplin’s Little Tramp and a neorealist tragedy. Every ounce of emotion in this film is contained within the borders of her desperately hopeful, heartbroken eyes, and it’s no mistake that Fellini chooses to close the film on them. I walked into Nights of Cabiria blind and hesitant, and even with the film’s overwhelming insistence on despair, I left with the faintest hint of optimism, an emotion I genuinely haven’t felt much of in quite some time. 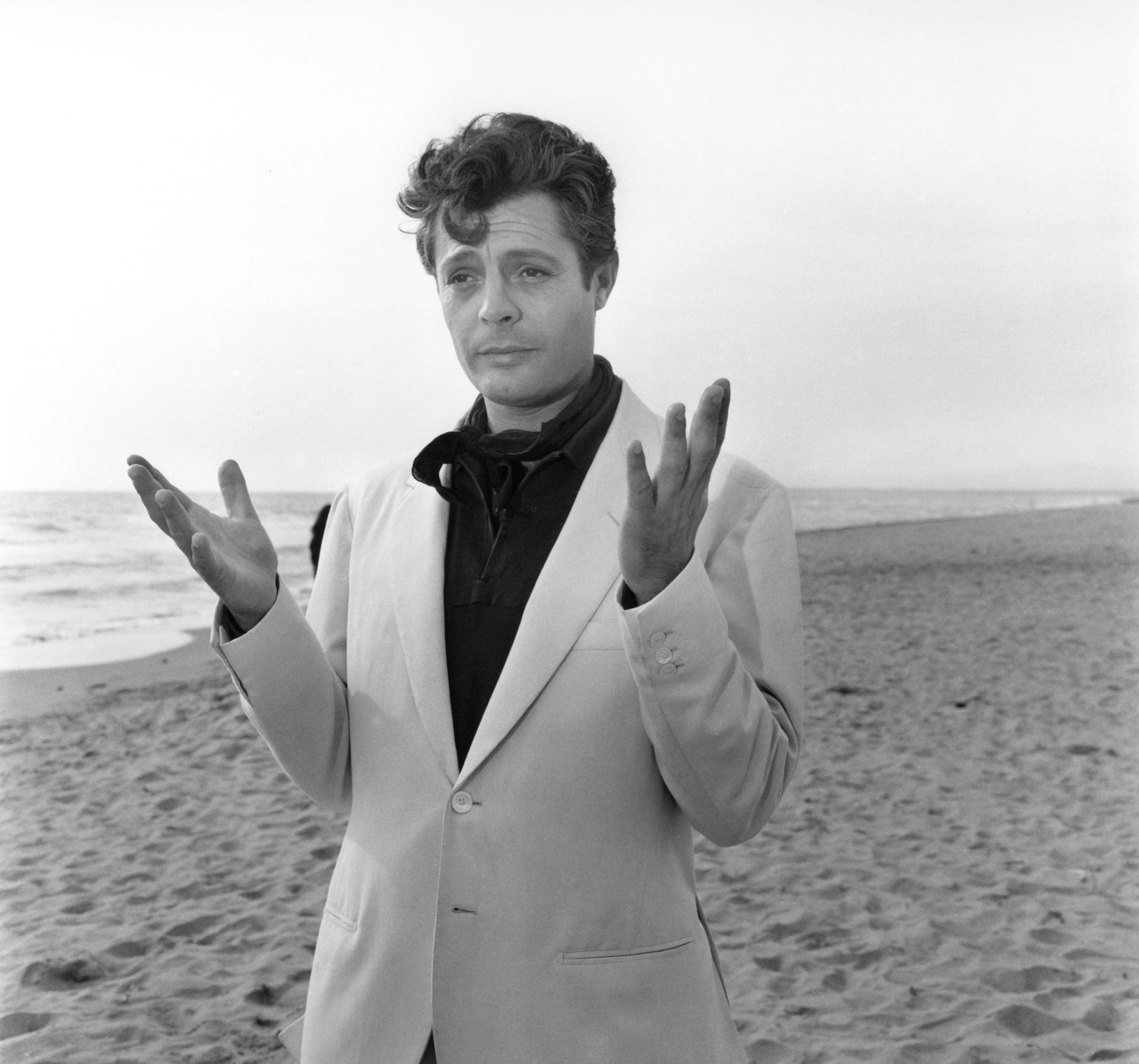 Federico Fellini’s 1960 Palme d’Or winner, La Dolce Vita, could accurately be described as the truest cinematic representation of life. Praised and reviled at the time of its release for its supposedly obscene content, it may seem somewhat tame by today’s standards but its messages are no less potent in this changed world as we observe a man living the sweet life but struggling to find the meaning in it. Through seven days, perhaps representing the seven Roman hills the film is set on, certainly evoking religious connotations of the cardinal vices and virtues, the film meanders through moments of elation and gut-wrenching sorrow and everything in between, all captured to such intoxicating effect that the life it seems to condemn can often seem immensely appealing. What is the sweet life it speaks of? Is there any meaning to our lives or should we just get swept away by the promise of a good time? What place, if any, does God have in this? Fellini may not have known all the answers but he certainly had a good go at trying to get to their core with La Dolce Vita and in Mastroianni, his lead, he found an immortal representation of these struggles.

Guido (Marcello Mastroianni) is a director working on an epic science fiction film and it is clear that he is flailing. He is fresh out of ideas for his film, and his love life is in shambles. He spends a weekend at a spa to recuperate, but he can find little creativity or peace with the people he invites there, which include a famous film critic, his mistress and his wife. This is the basic plot of the film, but it simply cannot describe the whirlwind of daydreams and nostalgia that 8 ½ sinks into.

Though 8 ½ is about a director suffering “director’s block”, Fellini clearly was suffering no shortage of creativity himself. As Guido struggles for any shred of inspiration, he constantly dips back into the past with memories of his own strict Catholic upbringing and his budding sexuality, which are often comically intertwined. Fellini takes this opportunity to regale us with startling images such as Guido floating off into the sky in the first three minutes of the film and the gigantic rocket that has been built for his sci-fi epic. The most notorious scene is fantasy, a gloriously self-indulgent harem of women that Guido has had any iota of sexual interest in. It would have come off as distasteful in almost any other director’s film, but the scene is also undercut with an air of melancholy from both the women that are portrayed and the sense that Guido knows that he can only screw up any healthy relationship with a potential lover because of his own inadequacies.

Many critics have declared that Fellini became somewhat unfocused in his work and that with the exception of Amarcord, his career after 8 ½ has been plagued with the self-indulgent excess we see here. While his work does vary wildly in quality after 8 ½, they also share an adventurous spirit of experimentation that 8 ½ definitely helped unlock. What Fellini understood, ultimately, was that many viewers secretly love seeing in the movies they watch the imprints of their creators, and 8 ½ is arguably the greatest expression of an artist presenting his neuroses and obsessions to the world.

What is possibly Fellini’s most shameless and strangest film comes in the form of City of Women, a self-referential absurdist comedy which is, in many ways, a natural progression of 8½. Originally conceived as a collaborative project with Ingmar Bergman a decade prior to its release, stunted by a series of internal issues, City of Women has the novelty of being a film conceptualized at the height of Fellini’s superstar era, yet also serving as a closure to that very period. Where 8½ was a dramatization of Fellini’s inner thoughts and concerns as an artist, City of Women narrows in on one particular facet of his work: his relationship with the opposite sex. That is, an instantly recognizable aspect of Fellini’s films is the depiction of women; his suave male protagonists, who are often self-insert characters, are consistently swarmed with leagues of beautiful and voluptuous women.

These depictions of women as objects of grandeur were especially prominent in Fellini’s streak of films from the early ‘60s all the way to, and throughout, the ‘70s. As Fellini became increasingly self-critical and reflective in his work, it makes sense that he would address these potentially contentious portrayals. With City of Women, he does just that but in a manner that itself may be contentious, as it frequently toes the line between parody and satire, ultimately falling in the former camp. City of Women tells the story of Snàporaz (Marcello Mastroianni), an Italian train passenger who pursues and insists himself upon a beautiful woman. After getting off at her stop, he follows her into a forest which leads him to a hotel filled with women gathered for a feminist convention—unfortunately for him, he is not welcome, as these women reveal themselves to be no ordinary feminists. Snàporaz is an unhinged, objectifying misogynist and is effectively the same character as the lead in 8½, portrayed by the same actor at a much later age. Here, Fellini makes a mockery of everyone involved; the feminists are all insane and Snàporaz is an over-the-top sex fiend. Within these extremes, Fellini makes a statement about the male ego, the desire to be loved, as well as how cinema can shape perceptions of women and gender relations. 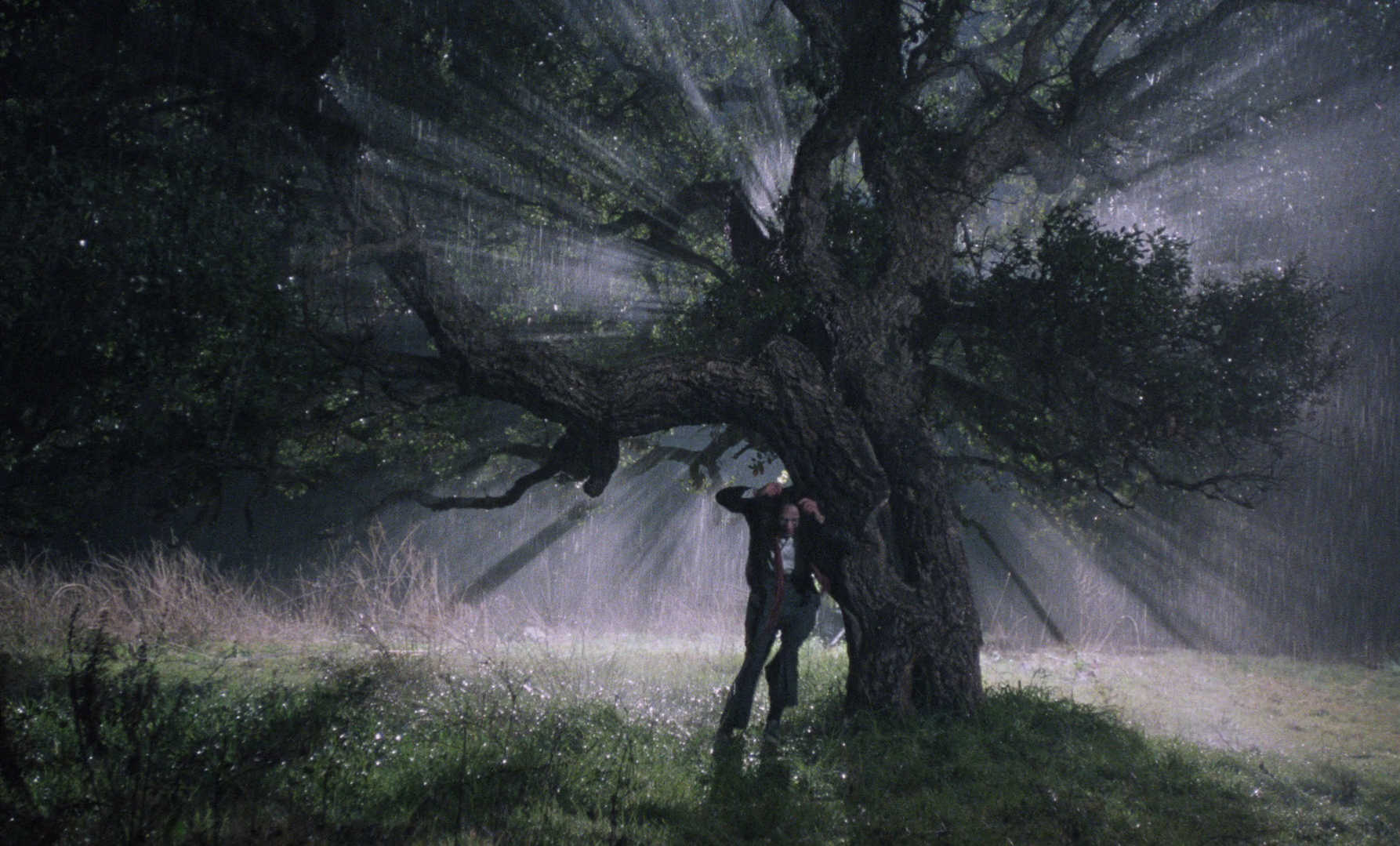 One of Fellini’s most obscure efforts is none other than his swansong, The Voice of the Moon, a film that only secured distribution in North America and the UK in 2017, nearly three decades after its theatrical release. Although it was a success in Italy and received critical acclaim by select publications in France, American and British distributors were not enthused: critics from these regions dismissed the film and as the turn of the century approached, it was thought that Fellini’s namesake held little-to-no value this late into his career. By this point, Fellini was exclusively making self-reflective films, from ruminations on memory to veiled self-critiques, and while The Voice of the Moon was no exception, it remains an especially distinct and fascinating film in his oeuvre.

Ostensibly an adaptation of Ermano Cavazzoni’s novel Il poema dei lunatici, The Voice of the Moon is simultaneously a spiritual successor to Fellini’s early-period La Strada, revisiting and building upon ideas and themes first expressed in that film. The Voice of the Moon follows Ivo Salvini (Roberto Benigni), a recently released patient from a mental hospital who wanders the countryside and indulges in a series of fantastical adventures, all while attempting to win the heart of his love. It is in these adventures that Ivo meets Gonella (Paolo Villagio), a neurotic old man with a penchant for conspiracy theories, the film’s other central character — who bears a striking resemblance with Fellini himself. Both characters serve as stand-ins for Fellini, each representing wildly separate points of his career. Interestingly, Fellini never intended for The Voice of the Moon to be his concluding film and even lamented the possibility. That said, the connective tissue between it and La Strada as well as the self-commentary found in Gonella and Ivo — contrasting late-period and early-period Fellini in one final reflection — makes for a more than satisfying conclusion to this master’s body of work.

0 comments on “The Films of Federico Fellini”