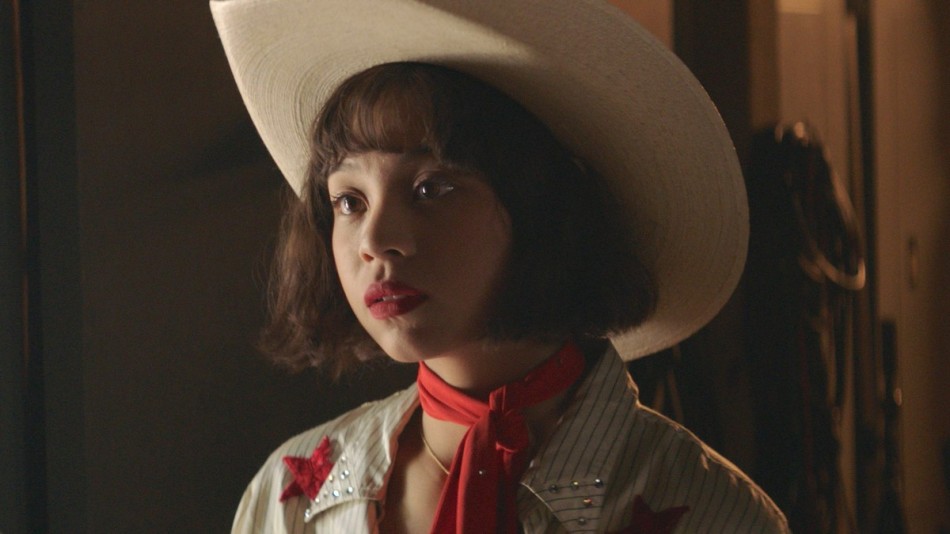 While most teen movies concern themselves with the universal anxieties of school cliques and attending school dances, Yellow Rose looks at the main character’s undocumented immigration status as her main source of apprehension.

Diana Paragas’s debut film centers around Rosario “Rose” Garcia (Eva Noblezada), a Filipina teenager living in Texas during the summer between her junior and senior year of high school. Rose doesn’t mention her grades or her classmates, aside from the fact that she was nicknamed “Yellow Rose” by them after performing a country song at a talent show, but it doesn’t seem like a disservice to the coming-of-age genre.

From the very beginning, Yellow Rose doesn’t shy away from showing the titular character’s everlasting love for country music. Rose listens to Kimmie Rhodes’s “Windblown” on a bike ride back to her home at the Bastrop Inn. After dinner, she plays a Patsy Cline vinyl that distracts her from studying for the SATs. Rose spends the next day browsing the local guitar shop with her Townes Van Zandt notebook.

Rose’s fondness for this music genre serves as a refreshing reminder that country fans enjoy the tunes from all different walks of life. The lyrics of being a societal outsider resonate more with Rose than stereotypical country listeners.

Paragas reserves these same scenes to accurately reflect the importance of the Catholic faith in a Filipino household. Rose and her mother (Princess Punzalan) pray before their meal together and she wishes a happy birthday to her deceased father in their living room’s shrine to the Virgin Mary. Not many religious references appear in the later story of Yellow Rose, revealing the secular society that surrounds Filipino immigrants.

When Rose is invited to a dancehall show by her friend Elliot (Liam Booth), Rose’s mother instantly rejects the idea as expected from the strictness of an immigrant parent. After providing Rose with a fake identification card and lying to her mother about taking her to church instead, Elliot ironically stands out as that familiar teen movie character in comparison to the iconoclastic life of the titular character.

The Broken Spoke, adorned with armadillo figurines and American flags, hosts an older crowd that would dampen the vibe of any high school house party. Rose and Elliot enjoy themselves anyway and their rebellion feels like the most wholesome kind of juvenile experience in any coming-of-age movie. She thrives enough in this environment to correct Dale Watson (Dale Watson) about Willie Nelson trivia, not realizing that he’s the performer of the dancehall show.

While Rose enjoys her night of freedom, her mother is left at home to worry about their immigration status. She talked earlier with a co-worker about how an immigration lawyer cheated her out of money, highlighting the frustrating yet frequent situations among undocumented people who are continuously being exploited instead of being the ones to take advantage of others.

After Rose tells Elliot that she imagines herself being trapped in their small hometown forever, her wish comes true in the worst way possible. She arrives at the Bastrop Inn to find that ICE has arrived with a warrant to arrest her mother and Rose narrowly escapes from the same fate.

She later expresses to Elliot that she doesn’t want to be forced into foster care, learning in this moment that her mother was wrong about how they gained legal immigration status after the death of Rose’s father. Rose asks Elliot to stop the car along the highway so she can run into a haystack in a field, wailing with the kind of raw emotion that pulls at anybody’s heartstrings.

Her situation seems irredeemably bleak until Rose opens a package that was left by her mother. Rose reads in a note that she should seek out her Tita Gail (Lea Salonga) for help. When she travels to the suburbs in Austin, Rose learns that her mother wasn’t communicative with her aunt about their immigration status so their options are limited.

Rose perceives herself to be an outsider as she tries to live with her aunt’s immediate family, feeling unfamiliar with the spacious home that could never be afforded by her mother’s salary as a housekeeper at the Bastrop Inn. Tita Gail’s lifestyle reveals the prosperities that can be achieved through the American Dream, but Rose’s conditions prove that these privileges are not a guaranteed experience.

She feels even more unwelcome after overhearing Tita Gail’s husband complaining about how they’re already too busy taking care of their own daughter to accommodate another one who may get them into legal trouble. Yellow Rose barely shows his face, leaving not much characterization aside from his dissent.

Rose takes a walk to get away from the toxic household, ending up at the Broken Spoke and arranges to live there while working in the kitchen and selling merchandise. Despite objections from Tita Gail that reflect the importance of family within Filipino culture, Rose leaves without a second thought.

Paragas delivers the moment of truth in her film when Rose’s mother asks about her immigration options. An ICE officer reminds her that she’s been living in the country for seven years without paperwork and has missed three court appearances.

After talking about her current living situation, her mother insists that she returns to Tita Gail’s household or relocates to Manila with her. The possibility of returning to the Philippines becomes impossible since Rose has already assimilated into American society. Any memory of her ancestral home has been forgotten.

Yellow Rose depicts the cruelty of an ICE detention center without sugarcoating any of the details. Rose’s mother sleeps with aluminum foil blankets in a crowded room with other undocumented people, being called by their assigned numbers instead of their names. This kind of inhumane treatment seems miles away from the low-risk problems in coming-of-age films, but emphasizes the reality that countless teenagers have been detained in these same spaces.

When working at the Broken Spoke, Rose befriends a co-worker named Jose (Gustavo Gomez) who shares the same experiences of being undocumented. Their friendship isn’t quite fleshed out and any hopes of further development are lost after ICE raids the dancehall in the middle of the night. Jose is sent to a detention center and never seen in the movie again. Rose barely escapes for the second time, living out the nightmare that undocumented people fear everyday.

Rose leaves the Broken Spoke out of concern that ICE will return, receiving money and contact information for Dale Watson. After visiting her mother and writing songs out of frustration, Rose makes a few demos in Dale’s music studio. These cathartic moments evoke the start of a modern family tale, only to find grounds back in reality after Dale tells her that she can’t live with him for much longer.

Rose later works at the Austin Motel, coming full circle back to her life at the Bastrop Inn but from the perspective of her mother’s job now. When talking to her mother on video chat about how living without her has been difficult, the sadness becoming more relevant than ever with the isolating effects on families throughout the ongoing coronavirus pandemic.

Paragas concludes her film with Rose preparing for a performance at the C Boy’s Heart and Soul. Elliot returns to watch her show, after visiting Rose a few times to see how she was adjusting with her living situations, and makes his romantic affection known by kissing her. Their adorably awkward interactions seem even more wholesome since he offers an escape for Rose from her worries about her immigration status.

Rose dedicates her performance to her mother, who is watching from a livestream in Manila, and Tita Gail even makes an appearance in the crowd. She sings “I Ain’t Going Down” with Dale, which brilliantly reads as a double entendre of expressing typical teenage rebellion and a personal opposition towards ICE.

The ending of Yellow Rose leaves more questions about the titular character’s fate rather than answering them. Paragas doesn’t reveal the rise and fall of her possible fame as a country singer, leaving much open to interpretation without being unsatisfying.