There was a brief period of time in which Judas and the Black Messiah was titled Jesus Was My Homeboy, though seeing just ten minutes of this film could tell you that the former Biblical-referencing title is a far more apt choice. The film opens with a William (Bill) O’Neal (LaKeith Stanfield) interview years following the assassination of 21-year-old Black Panther Party spokesman Fred Hampton (Daniel Kaluuya), for which O’Neal provided intel to the FBI. O’Neal is asked what he would tell his son about “what he did” in the late 60s and before he gathers his thoughts, Judas and the Black Messiah rolls historical footage from the Civil Rights Movement. 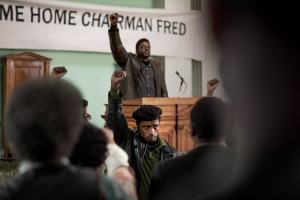 For many biopics and films related to Black history, there are certain genre conventions that are followed. Judas and the Black Messiah does not stray from them in the slightest; however, it abides by them so seamlessly that the film isn’t diminished by not being more avant garde. An earnest, thoughtful approach is one that should be taken when examining the assassination of Fred Hampton and such an approach is what Judas and the Black Messiah does.

Daniel Kaluuya portrays both the resolve and kindness of Fred Hampton through scenes of impassioned speeches and showcasing Hampton’s involvement in charitable endeavors. The Black Panther Party provided free breakfast to those in Chicago, and Hampton taught political education in the early hours of the morning to his supporters. Hampton was a unifier, and sought within Judas and the Black Messiah to appeal not only to Black citizens, but also to other factions of the community including rednecks and Puerto Ricans. Hampton knew that conflict between different races, classes, and communities would ensure a lack of social progress, and he even brokered a nonaggression pact between Chicago’s gangs. His charisma and ability to unify people brought him to instant notoriety amongst police & FBI circles, attracting attention from FBI Director J. Edgar Hoover himself who believed that Hampton’s efforts could set in motion a revolution.

To prevent Blacks from setting aside their differences and forming a cohesive movement, Hoover and the FBI would target leaders within the Black community such as Hampton and either seek to imprison or kill them. The Counter Intelligence Program (COINTELPRO) was established by the FBI to sow distrust in progressive political organizations such as the Black Panthers and disrupt their efforts, Hampton quickly becoming a target of theirs. Individuals such as Bill O’Neal were enlisted as plants to gather intel and infiltrate at great peril to themselves and those they were assigned to. From this ‘intel’, police would obtain warrants to raid the homes of Black Panther and community leaders, often with little or no justification. Such a raid led to the assassination of Fred Hampton, Bill O’Neal sharing the floor plans of Hampton’s apartment with the Chicago Police Department.

The corruption behind the sanctioned violence presented in Judas and the Black Messiah is unsettling and perhaps not noticed enough in popular discourse, even in light of Black Lives Matter and an increased awareness of Black history. The story of the life and assassination of Fred Hampton appears little in popular culture compared to that of MLK and Malcolm X, and yet a comparison between Hampton and Jesus can certainly be – and is – drawn. Judas and the Black Messiah has the potential to amplify the legacy of Fred Hampton and cast a light on the contradictions and injustice of a period within American history not yet past us.

Despite Judas and the Black Messiah largely telling the story of Fred Hampton, the film is told from the perspective of Bill O’Neal. It could have compellingly been told from either vantage point, yet telling from O’Neal’s perspective allows us to observe Hampton as an outsider rather than through Hampton himself. This deifies Hampton’s character and enables us to see the injustice of the FBI and Chicago Police Department through O’Neal’s experiences. Taken in by police at the start of the film and becoming a plant following his impersonation of a police officer, we observe the administrative factors that came into play to attempt to suppress Hampton. O’Neal’s use of a police badge to pose as authority to commit grand theft auto is a not-so-subtle, but pertinent reminder that authority can be more powerful than a gun.

O’Neal’s betrayal of Hampton as authorities force his hand becomes more tragic as we see O’Neal build the trust of Hampton and firsthand experience the fight for social justice. When invited to his FBI contact’s house and seeing the wealth of his superior, O’Neal begins to realize the corruption at play and that he is being taken advantage of. By this point however, there is little O’Neal can do without risking facing time for the grand theft auto he committed. Judas and the Black Messiah does a compelling job telling the tragedy of O’Neal’s character to the extent that O’Neal does not feel of minor or lesser importance to Kaluuya’s Hampton. As he shouldn’t- O’Neal too ultimately paid the price of his life after dying/committed suicide following intense guilt for his abetting in Hampton’s assassination.

Judas and the Black Messiah is gripping, well-acted, and represents an informatory dramatization of the life of Fred Hampton and Bill O’Neal. One should never take a biopic or retelling of historical events at face value, and the mark of quality for any film of this genre is its ability to convince audiences to look further into the story told. For myself, Judas and the Black Messiah certainly prompted further exploration into the Black Panther Party, Hampton, O’Neal, and the COINTELPRO program, and I’m confident the film will prompt fellow audiences to do the same in our own timely period of American history.

0 comments on “Influence & Judas and the Black Messiah”