Today sees the Cannes premiere of Thai director Apichatpong Weerasethakul‘s film Memoria starring Tilda Swinton. As we anticipate this release, we look back at a few of Weerasethakul’s films in this month’s Retrospective Roundtable.

Mysterious Object at Noon, Apichatpong Weerasethakul’s debut film, follows in the tradition of Abbas Kiarostami. Weerasethakul studied the late auteur’s work at the School of the Art Institute of Chicago, and from the first minutes of the film, we can observe Kiarostami’s visual trademarks (scenes filmed from a driving vehicle) and exploration of fact versus fiction.

In Mysterious Object at Noon, the exquisite corpse party game is brought to life, Weerasethakul’s film crew interviewing those they come across while traveling through Thailand, and asking each interviewee to add to the story began before them. Allowing schoolchildren to determine the end of the story broadens its scope and creativity, and the finished story told by numerous townspeople guides us to contrast how different people tell stories and what is considered to be entertainment. Though clear influence from Kiarostami is present in this early film, Weerasethakul’s filming of Thailand and its people provides his story with a setting and culture that is distinct from Kiarostami’s portrayal of Iran. 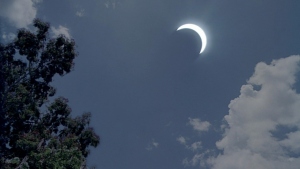 Weerasethakul had already proven himself to be a startlingly original and incisive talent with his previous features Mysterious Object at Noon and Blissfully Yours, but it was perhaps in Syndromes and a Century that his major themes and traits as an auteur became manifest. Syndromes is essentially a diptych about a doctor coming to work in a medical center and getting close to its residents. Weersethakul tells this modest story twice with many of the same actors, but changes significant details such as the location and the type of hospital that is being worked at. His storytelling is not so much in the actual unfolding of the plot, but rather on what he chooses to focus on. He lingers on relics of the past such as statues of Buddha, especially when they are juxtaposed to more modern settings. Even if he doesn’t move the camera, something interesting may be going on in the mise-en-scene that makes no sense in the context of the scene, such as a woman staring directly into the camera as another woman chants a ritual over a patient. It is as if he wants us to question the reality of what we see, even though the story isn’t obviously supernatural.

While the story and Weerasethakul’s intent may be opaque, Syndromes is far from some clinical and cold provocation, but rather a warm love letter to his characters. Just because he chooses not to use conventional ways to get us to sympathize with his characters (close-ups, voiceovers, purely expository dialogue, etc.) doesn’t mean that Syndromes is devoid of other more innovative techniques. We get a sense of who they are from the seemingly random conversations they have or the way they react to unexpected situations such as receiving gifts. Weerasethakul is also an extremely sensual director, and not without a sense of humor. A makeout scene with the doctor and his girlfriend culminates with a shot of the doctor’s erection in his pants, which is startling yet also warmly funny. It is this open attitude towards sex that has gotten Weersethakul banned from showing his films in Thailand, where censorship laws are quite strict, but his films have played well overseas because of his unique vision as well as his unrestrained and eccentric sensuality.

Uncle Boonmee Who Can Recall His Past Lives (2010)

For most people, Uncle Boonmee Who Can Recall His Past Lives is their first Weerasethakul film. In the US, the film is one of two of Weerasethakul’s films that can be purchased on VOD, and when the film premiered at Cannes in 2010, Weerasethakul became the first Thai director to take home the festival’s highest honor, the Palme d’Or, and was the first Asian director since 1997 to earn this award. The stature of the film is immense, matched by its story of a dying farmer and themes of spirituality and the otherworldly.

Uncle Boonmee (Thanapat Saisaymar) is cared for by a nurse and his family in his final days. During dinner one night, the ghost of his late wife Huay (Natthakarn Aphaiwong) visits him as well as his son Boonsong (Jeerasak Kulhong), who had disappeared years ago. Boonsong has changed however, now covered in black hair and possessing glowing red eyes – he has become one of the “Monkey Ghosts” he has observed in photographs and has since strayed from human lifestyle and society. For Boonmee, this scene, though bizarre, is of comfort while we are led to ponder what connects our lives with those who have lived before us and with the world around us. Sound is an ever-present part of the mise-en-scene Weerasethakul creates, insects, birds, and flowing water filling the silence when no one is speaking. For myself, watching Uncle Boonmee is a meditative experience that softens the fear and apprehension regarding death and the afterlife. While slow cinema films risk losing their audiences’ focus, Uncle Boonmee is a film that invites you to engage with what you see on screen, likely prompting recollection of one’s own life and family while observing Boonmee’s final days.

Apichatpong Weerasethakul’s films usually focus on contrast. His 2012 feature, Mekong Hotel, focuses on a shift between fact and fiction, with footage of genuine conversations and shots of the hotel’s surrounding area on the Mekong river interspersed with rehearsals for a film about the bond between a vampire-like mother and daughter. The concept certainly sounds like a bizarre mix, and it’s possibly not the most accessible of Weerasethakul’s work, even at around an hour in runtime, but what it perhaps offers is an insight into the director’s filmmaking process. There sometimes isn’t time on film sets for rehearsals and informal conversations, but Mekong Hotel displays strengths in taking the time to do this step of the process. The film demonstrates how developing rapport enhances the actors’ working relationships and their characters as well. Mekong Hotel shows an understanding of how Weerasethakul’s way of working outside of the standard filmmaking conventions benefits his work.

0 comments on “The Films of Apichatpong Weerasethakul”