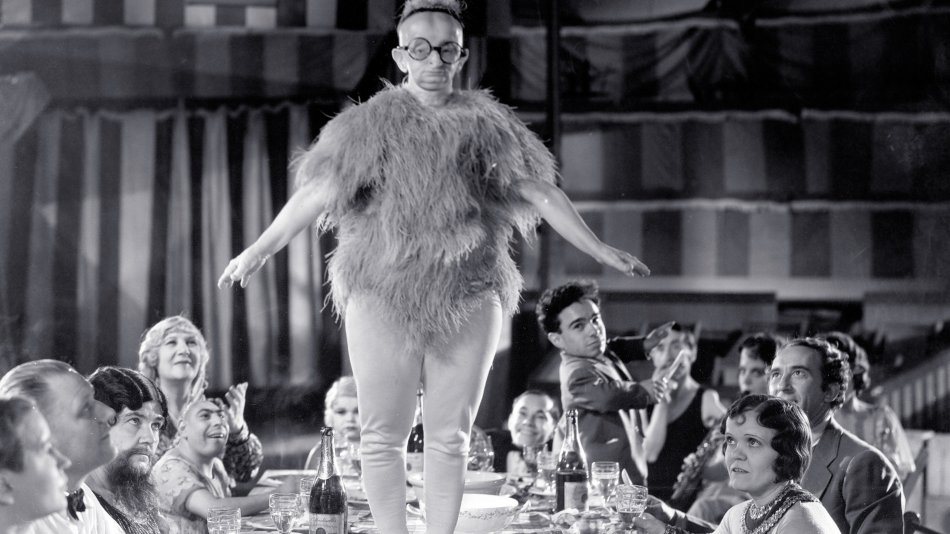 In 1932, a year after making Dracula (often billed as the first talkie horror picture) Tod Browning released Freaks, which would effectively end his career due to the film’s initially poor public reception. A film teeming with brutality and sexuality in ways that would soon be impossible to show in Hollywood films with the inception of the Hays Code (though censorship still prevented the film from being shown in its initial form), it’s no wonder the film offended the public and failed to become a box office success. Nevertheless, like so many other horror films, its reputation has only grown with time and it now stands  among the greatest early horror films.

The film, set in a circus, involves a plot by trapeze artist Cleopatra (Olga Baclanova) and her lover, the strongman Hercules (Henry Victor), to steal the fortune of Hans (Harry Earles), a dwarf who works as one of the sideshow freaks despite his large inheritance. After successfully seducing and marrying Hans and slowly poisoning him, the plot unravels as Cleopatra cannot resist mocking Hans’s dwarfism and he discovers the source of his illness. Eventually, in the famous ending, the rest of the circus entertainers unite to defend Hans and mutilate Cleopatra, transforming her into a human duck and proclaiming her “one of us”. Initially, the film was much more graphic in showing Cleopatra being attacked and implied that Hercules was caught and castrated by the other circus members, but outrage among early audiences and widespread walkouts caused a demand for removal of nearly a third of the film, resulting in a final cut barely an hour long. The cut sequences now rank among the numerous lost films of early Hollywood. Still, even with the censorship the film experienced, Freaks remained controversial and was outright banned in the United Kingdom until it was released as an X rated film more than thirty years later. In the United States, it is the only MGM film to have been pulled from release before completing its planned domestic run.

The contemporary response to the film and its later reappraisal seem to derive not so much from the brutality of the revenge delivered at the film’s end but the film’s depiction of people with disabilities. The circus’s freaks may be relegated to sideshow acts because of their disabilities but, in a time with extremely limited opportunities, it gave them a way to overcome their disadvantages. Many of the able-bodied performers see them as equals as they all go about their daily lives together, and their final revenge against those who saw them as lesser feels righteous. In an era where the disabled were only allowed to be freaks, it follows that a film that humanizes such people would make many audiences uncomfortable, with a reviewer claiming on its release that the film didn’t work because it would be “impossible for the normal man or woman to sympathize with the aspiring midget”. To Tod Browning however, the empathy exhibited in the film must have seemed normal as he had run away to join the circus as a young man and worked alongside a similar community.

Even with the empathy the film has for its deformed characters, early audiences may have been onto something with the discomfort they felt, albeit for the wrong reasons, because it operates quite well as a horror film. It’s brutal and suspenseful with a foreboding atmosphere but, best of all, it brings some of the ideas of German Expressionism to American horror filmmaking. Anyone who has followed the pieces I’ve written the last few Octobers already knows I have an immense fondness for German Expressionism and its imitators, which would later include a wide array of filmmakers such as Alfred Hitchcock, Ridley Scott, and Tim Burton, so bringing it further into the fold of American filmmaking is appreciated. Browning’s earlier work on Dracula with Metropolis cinematographer Karl Freund that went on to inform the look of all the classic Universal horror films had clearly worked its influence into Freaks. Besides just finding an excellent balance between realism and overly apparent shadowing that supports the unnatural feeling, the circus presents an ideal backdrop for the style with its children’s storybook façade, causing the darkness and horrors to feel all the more unsettling. Though Dracula was certainly a major film, Browning’s mastery of craft and personal connections to the material make Freaks seem to be his clear magnum opus.

1 comment on “From Sideshow to Main Event in Freaks”