One of the most striking final moments of Matthew Weiner‘s 2007-2015 American period drama Mad Men finds its main character, Don Draper, driving off into the sunset as the sounds of David Bowie‘s ‘Space Oddity’ crescendo into its triumphant chorus. In the context of Mad Men, the song represents not only the end of the show but also the end of the decade it attempted to faithfully capture. With just one song, the show re-contextualizes the historical feeling of everything you’ve watched over its seven-season run, bringing its narrative out of the mythic 60s into the gritty reality of the 70s. As a period piece, Mad Men had the benefit of foresight, and as such the scene is not merely utilizing a piece of contemporary music but also tactfully exploiting its audience’s emotional connections to music and history to imbue its entire narrative arc with an inevitable sense of time passing and the dread of a new decade. 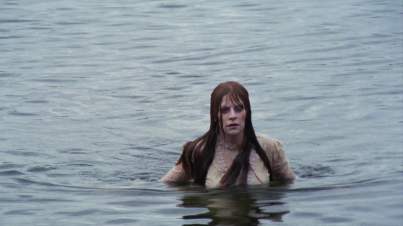 John Hancock‘s Let’s Scare Jessica To Death was released in 1971 (just two years after Bowie’s ‘Space Oddity’), an understated psychological horror film that articulates many of the same looming fears of the aforementioned Mad Men scene before the 1960s could even be codified into the history books. The film follows a young woman named Jessica (Zohra Lampert) who has recently been released from a six-month stint at a mental hospital for some unspecified psychological trouble, and is now back to living with her husband Duncan (Barton Heyman). We open on the two as they travel with their friend Woody (Kevin O’Connor) to an apple orchard in Connecticut that the couple recently purchased, the two ostensibly hoping that the fresh air and distance from the busy streets of New York will help Jessica “get better”.

It doesn’t take long to realize that such a strategy is doomed to fail from the start. Jessica almost immediately begins hearing voices in her head and seeing mysterious figures – one of which happens to be very real. A young, attractive redhead named Emily (Mariclare Costello) is discovered squatting in Jessica and Duncan’s new home soon after they arrive, claiming she presumed the house to be abandoned. Jessica appears so relieved by the mere fact that one of her visions was real that she’s enthusiastic to forgive the home invasion, and the couple even invite Emily to stay with them. What begins as a friendly story about a group of young people living happily together soon devolves into a confusing, trippy portrait of a woman struggling to keep her self-destructive thoughts of insanity at bay.

Let’s Scare Jessica To Death isn’t simply a movie about it’s main character’s deteriorating mental health, however, instead complicating its story by weaving in the possibility of a supernatural cause for her visions and thoughts. It bears similarities to ambiguous ghost movies like The Innocents and The Shining in that way, presenting a supernatural history of its location (in this case, a drowned girl named Abigail Bishop whose old sepia-tinted photograph looks an awful lot like Emily, along with a nearby town of hostile old people who have mysterious scars on their necks), but always raising enough of a healthy skepticism towards its characters’ psychological reliability as to render any one explanation for its narrative unsatisfying.

The film is told with an inexpensive but potent style, one that would come to define many of the most iconic horror films of the 1970s. Its effects are minimal, relying instead on a disorienting editing pattern often involving intense zooms and rapid bursts of cutting, along with a psychedelic soundtrack that alternates between a melancholy theme played on piano and a paranoid blend of pulsating synths. Voice-over narration also comes to define the film’s soundscape, incorporating both Jessica’s increasingly intrusive thoughts and the voices (perhaps imagined, perhaps real) of various ghosts she seems to hear. 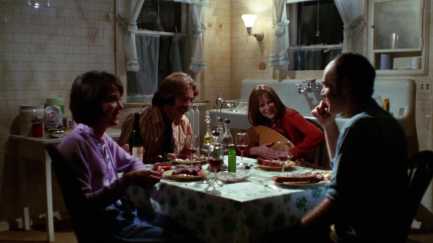 While Let’s Scare Jessica To Death works decently well as a moody, psychological ghost story alone, the anxious dread of its early-1970s setting and the exceptional strength of its lead’s performance render it a genuinely eerie portrait of post-60s malaise. Its main characters have that optimistic, youthful energy of members of the counterculture movement, and their eventual fates can’t help but feel somehow symbolic of an entire generation coming to terms with the bitter reality that “peace and love” had grown out of fashion. Zohra Lampert, who would go on to star in John Cassavetes’ Opening Night, plays Jessica as someone grasping at sanity, a sickly smile painted over her face in nearly every frame as if to fight back the screaming insistence with which her thoughts tell her that she’ll never be happy. It’s a genuinely tragic performance, made even more upsetting by the fact that the film plants us firmly within the interiority of her troubled headspace.

Emily, the film’s mysterious antagonist, also looks and acts like someone who could have just wandered out of Woodstock in a stoned haze. Yet something always seems terribly off about her – not just because of her uncanny resemblance to the dead girl who once lived in Jessica and Duncan’s new home, but also because of the corrupting influence her presence seems to have on the entire town. She always feels like an imposter, someone or something that has infiltrated the group and rotted it from the inside. One of the most effective scenes in the entire film happens relatively early as she sings a simple song for the group after their first dinner. It’s a slightly hippie-ish acoustic ballad, with lyrics such as “stay forever, my love” – pleasant at first but soon taking on an eerie menace as the soundtrack warps her voice with trippy reverberations and eventually cedes to Jessica’s intrusive thoughts. “It’s blood, Jessica”, a voice repeats again and again, almost drowning out the song entirely as Jessica looks down at the juicy remnants of the meat they just ate and has a quiet panic attack.

I first discovered Let’s Scare Jessica To Death on the Criterion Channel in autumn of 2020, right before the COVID-19 pandemic entered its most deadly wave yet in the United States. At the time, I merely regarded it as a creepy, atmospheric little piece of horror, not connecting the confusing dread looming over its characters to anything resembling my own experience. In the year since, the film has stayed on my mind quite a bit, even more than some of the other films I watched that year that I would otherwise consider to be better. It was only with a recent rewatch that I connected its subtextual anxieties with my own of that year, of the way its main character tragically realizes by the end of her story that the plans she made and the dreams she had are now forever lost to the twists and turns of the world’s direction. Its director seemed to sense something similar about the 70s, stating later, “You could already feel that negativity brewing when we were making Jessica; that things weren’t working out the way some of us had hoped and dreamed they would”. I don’t know if I would consider Let’s Scare Jessica To Death a masterpiece yet, but something about its prescience of the future has haunted me, most of all its simple shot of a hearse bearing the word “love” scratched out – an apocalyptic image that is perhaps the film’s most poetic expression of its generational malaise. I’ve often thought about that image. I wonder, in fifty years from now, what such an image for the end of the 2010s will look like.