Regina King’s One Night in Miami… is masterful. Not only is its premise – a meeting of minds between Cassius Clay (also known as Muhammad Ali), Sam Cooke, Jim Brown, and Malcolm X – intriguing, but King’s presentation of the film is a feat in itself. Not many directors can pull off a 2 hour film consisting mostly of dialogue, let alone as a directorial debut where topics of discussion include such heavy topics such as prejudice, privilege, spirituality, and legacy. 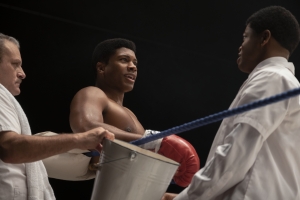 One Night in Miami… opens with the boxing match between Cassius Clay (Eli Goree) and Henry Cooper (Sean Monaghan), a match in which Clay nearly loses despite the clear disparity of talent between the two boxers. Rather bluntly, Clay is toying with Cooper, at risk of losing the match. The bout establishes Clay as brazen yet vulnerable to his own pride if not honed in. What follows Clay’s match are similar vignettes to introduce us to Sam Cooke (Leslie Odom Jr.), Jim Brown (Aldis Hodge), and Malcolm X (Kingsley Ben-Adir). Cooke and Brown’s introductions see the two subject to racism, despite being at the peak of their careers, leading the way to introduce civil rights leader Malcolm X.

An almost mythical presence, portrayals of Malcolm X are perhaps the most noted when appearing in a film. In addition to Ben-Adir’s performance, Malcolm X’s family is at the forefront of One Night in Miami… Betty X (Joaquina Kalukango) watches Malcolm give a speech on television, then greets Malcolm hours later than he had expected to return home. Malcolm had wanted to put his daughters to bed, but his activism comes at a price to his family life. One Night in Miami… portrays Malcolm as a family man who loves his family deeply, but whose work comes in the way of being as present as he would have hoped. As such, Ben-Adir’s performance as Malcolm comes with a noticeable twinge of sadness.

Clay looks up to Malcolm, and invites him to be his spiritual advisor leading up to his fight with Sonny Liston (Aaron D. Alexander). After handily defeating Liston, the quartet meet at a motel for the fateful night, Sam Cooke arriving first after driving fast. Cooke is eager to celebrate and indulge himself whereas Malcolm is measured, and wants to use their time together as an opportunity to reflect and be grateful for Clay’s victory. Malcolm seems to know his days are numbered, and while Cooke pokes fun at Malcolm’s uneasiness, we see that Malcolm’s paranoia is earned upon seeing suspicious figures in the parking lot.

In the motel room, each of the four men bring a certain quality to their discussions. Cooke is the most dynamic and temporal whereas Brown is reserved and thoughtful. Clay believes Malcolm ‘has it all figured out’, whereas cracks in Malcolm’s foundation become more evident throughout the night. The relationships between these characters are compelling, and King doesn’t allow any one of these legendary men to steal the spotlight for too long. Brown says the least out of the four, but it is his dialogue and compassion for his fellow men that perhaps make the greatest impression on a second or third watch of the film.

As the four catch up, their careers become the topic of conversation, and it is here where One Night in Miami… is most impressive. It’s evident that appeasement and stereotypes play a role in these men’s careers and opportunities. Brown is able to become an actor due to his fame and recognition on the football field; however, his first role is a Black soldier who dies halfway through the film. Cooke has achieved immense musical success; however, his music’s intended audience is White and it is White bands’ covers and interpretations of Black songs that are topping the charts. Malcolm is particularly critical of Cooke’s music since he knows Cooke is a talented musician, yet has to cater to a White demographic. Malcolm argues that Cooke is not achieving his potential as a musician or as a Black American who is capable of wielding influence and enacting true change. Cooke retorts that he is empowering Black Americans since he owns his masters and a label. He explains that when he let The Rolling Stones record a cover of a song written by Bobby and Shirley Womack that every time a White person buys the Stones’ cover, they are putting money into the Womacks’ pockets. Cooke declares this is empowering – “everybody talks about they wantin’ a piece of the pie, well I don’t. I want the goddamn recipe.”

Malcolm and Cooke have very different perspectives on their responsibilities as Black men and how they can empower future generations. King is objective about how she portrays both men’s views. She grants credence to both Malcolm and Cooke, and in part because of this, we’re encouraged to think about this still pertinent topic in relation to life today, almost sixty years later.

It is this thoughtfulness that One Night in Miami… inspires that makes the film dwell in my mind. King places the men’s discussion on race within the context of their experiences, and allows her actors to breathe life into their portrayals of these immense historical figures. Her film engages with us, honoring the significance of these men and prompting us to consider how equality is measured and what in terms of civil rights remains to be accomplished.

0 comments on “It’s More Than One Night in Miami…”