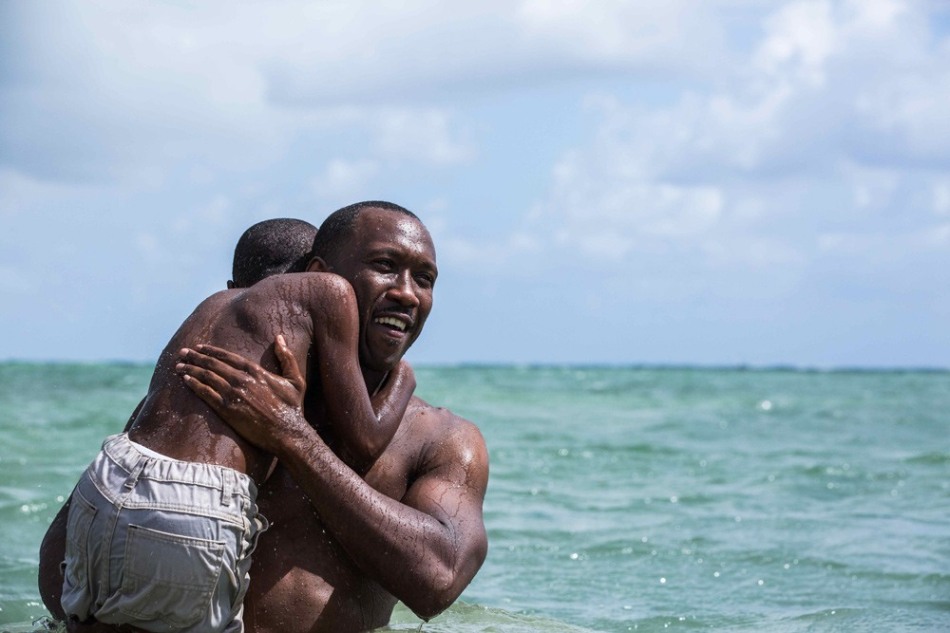 My first impression of Barry Jenkins‘s Moonlight came while standing outside the theater, waiting to be allowed in. I stood shoulder to shoulder in a small lobby with the rest of the crowd for the sold out showing I was attending, when the theater began to empty from the prior showing. The first person in the large crowd was wiping tears away from her face, but to no avail. She was not alone in her inability to control the emotions brought on by the film as for several minutes person after person left the theater in tears. Needless to say, my already sky-high expectations had been boosted to an extreme by this incredible display. 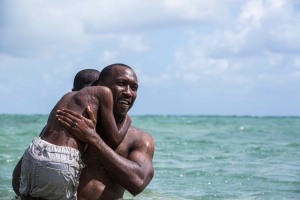 The story of the film is split into thirds as it follows Chiron, a young man, through childhood, adolescence, and then adulthood. It is shot almost entirely in tight close up, focusing on what Jenkins views as the truly important element of the film: its characters. The three actors who play Chiron (Alex Hibbert, Ashton Sanders, and Trevante Rhodes) each manage to capture the character’s facial patterns and overall spirit as the film shifts into each of its stages.

Young Chiron, called “Little” by the children who bully him, struggles to befriend other children his age. He is taken under the wing of Juan (Mahershala Ali) and his girlfriend Teresa (Janelle Monáe), who give him guidance and a bed when he can’t stand to be around his mother, a drug addict. The stage is set early for Chiron’s later sexual exploration when he asks Juan and Teresa what it means when the other kids call him a “faggot”. Chiron struggles in his youth and his teen years as he acts and dresses differently from the other kids. Juan teaches the child to embrace his own identity rather than let others dictate his personality.

Interestingly, in adulthood, Chiron would build his persona to reflect the model that Juan created for him. As Juan was his only male role model, he was whom he determined a man should be like. Like Juan, Chiron became extremely muscular. Like Juan, Chiron worked on the streets as a drug dealer. When Chiron was a child, Juan told him a story about a childhood friend who gave him the nickname “Blue”. Chiron’s friend, and later lover, Kevin nicknames him “Black”. This parallel contributes to the films climax, as Chiron never gives himself the freedom to find out who he really is.

Chiron and his mother, Paula (Naomie Harris), have a volatile relationship. Though Paula cares deeply for her son, her struggle with drugs keep her from being able to relate to him throughout the film- she instead chooses to alienate him and harass him for drug money. As Chiron grows into an adult, Paula moves to a rehab center where she becomes clean and finally connects with her son, urging him not to go down the same path that she did.

The film’s most dynamic relationship throughout each stage of Chiron’s life is between him and Kevin (Jaden Piner, Jharrel Jerome, and André Holland). As children, they have an immediate chemistry. Though Chiron is a reject amongst most of his peers, Kevin befriends him through their adolescence. This young friendship climaxes as the two share a homosexual experience on the beach as teens. The beach setting plays a powerful role in the film beyond this one scene. Juan teaches young Chiron to swim in a baptism-like scene and later, as an adult, Kevin lives at an apartment just off the beach.

Kevin and Chiron’s teen friendship ends after a confrontation between Chiron and a young man who had been bullying him (and who had even intimidated Kevin into helping to beat Chiron up) leads to Chiron’s arrest and subsequent relocation to Atlanta. When Chiron and Kevin are finally reunited in adulthood, it is clear that the latter is very surprised at what his friend has become. This interaction climaxes when Chiron finally opens up about his feelings and the fact that he hasn’t been able to love since the night on the beach with Kevin. The film ends with Chiron being held tenderly by Kevin.

The final moments are incredibly powerful, especially given the frequent sexualization of romantic relationships in many films today. Instead of portraying their relationship in a purely sexual manner, it is truly one borne from deep feelings and caring for one another. Their embrace is one of passion, but is not explicitly sexual. In this way, it leaves an impact that is unexpected and moving.

Jenkins cast the film brilliantly. In making the decision to cast three different actors to play Chiron (and to a lesser extent, Kevin) he took a huge risk in potentially interrupting the continuity of his film. Instead the three actors, particularly Rhodes, really embody a single identity. Their facial expressions and mannerisms made the change feel like a natural progression, despite the vastly different physical appearances of the actors. It is rewarding to see a filmmaker take a risk and to have it pay off so monumentally.

At its core, Moonlight is a deeply personal film. It attempts to put the viewer into the minds of the characters in a way that all people can relate. Certainly the film explores the struggles of exploring one’s sexuality, especially in a community where that exploration is not encouraged, but the movie does not apply only to homosexuals or only to the black community. The story sets out to discover why we try to hide from ourselves, and mask our real identities. In this goal, Moonlight certainly succeeds with flying colors.

My showing of the film echoed the one that I had seen emptying. Teary eyes filled the theater as Moonlight closed in a touching embrace between two men who have spent decades of friendship trying to find each other. Despite the lofty expectation that I had going into the viewing, I found myself moved and thinking about the film for days afterward. Its message rings true and its visually beauty only serves to add to its impact. I am anxious to revisit Jenkins’ masterpiece and I eagerly await his next project, whatever it may be.