Anyone recently out of a relationship recognizes the cumbersomeness of the time right after. 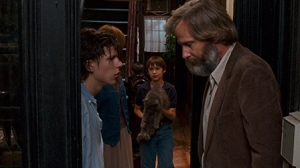 There is arguing. There is assigning blame. There wondrously becomes ways of ‘proving’ who was the caring one and who was the heartless one. There’s the pain of seeing your lover with another man or woman and wondering what they saw in that other person that you didn’t have. There’s the struggling to maintain some sort of relevance- no matter how insubstantial or futile- in the other’s life, especially if children are involved. There’s the pain of continually having to walk up his or her steps to knock on their door, almost as if one’s just any other stranger that can knock on that door too. All of this is depicted within Noah Baumbach’s The Squid and the Whale (2005).

“Mom and me versus you and Dad” sums up the family dynamic at the start of The Squid and the Whale. Frank (Owen Kline), the youngest son, speaks these words as the family plays doubles tennis. The eldest son, Walt (Jesse Eisenberg), looks up to his father and values his opinions more than anyone else’s: he chooses not to read books assigned in class but instead asks for his father’s opinions on the texts. The father, Bernard (Jeff Daniels), is an author who is declining in significance- he hasn’t been able to find a publisher for his next novel. Nonetheless, he maintains a certain degree of narcissism and arrogance in his behavior. By contrast, his wife, Joan (Laura Linney), didn’t begin writing until after she was married to Bernard but she has achieved recent success in publishing her own novel.

Bernard’s jealousy of his wife’s literary success induces tension on their relationship but Joan’s affairs induces further stress, perhaps the impetus for the couple finally agreeing to divorce. Their children adopt self-destructive ways of handling the divorce that distort their behavior and perceptions of girls in school; they too experience a loss of innocence as a result of their parents’ declining relationship.

Noah Baumbach creates characters in The Squid and the Whale in a way that we can’t really determine who was the ‘most wrong’ in the declining relationship. Unfortunately, both adults still need more time to mature as well as the children. Depending primarily on the personal experiences of the viewer, it is equally plausible that we might relate most to the father, to the mother, or to either of the two children. Through his film, we aptly observe the heartbreak and confusion experienced by his characters. Baumbach recognizes that people are beautiful and ugly, noble and petty, frequently alternating between the two within mere minutes. The tightly-knit narrative he spins in The Squid and the Whale is autobiographical, but ultimately speaks to anyone- we have all unfortunately observed or experienced the decline of a loving relationship.