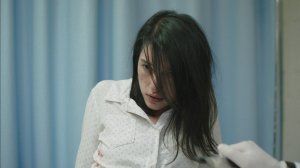 Alex Sitaras: This month’s selection of films is perhaps our most unique yet. There’s no natural choice of order to start or finish with, so I’ll begin by bringing up a film that I’m most looking forward to seeing this month. The Untamed is Amat Escalante‘s fourth film and is a story of family dysfunction and sexuality. The premise of the film is that a married couple discovers a meteorite. The meteorite had transferred a creature to earth, this creature evoking sexual frenzy to any living thing, man or animal, nearby. Amat Escalante is known for his dark and gritty films and The Untamed looks to fit well into his oeuvre. I’ve also read that some of the cinematography in the film is inspired by his fellow countryman Carlos Reygadas‘s films.

Matt Schlee: I can’t say that this is a filmmaker I’m particularly familiar with, but the plot certainly sounds intriguing. At the very least this looks to be a very unique movie.

The new release I’m most looking forward to is A Ghost Story (dir. David Lowery). It’s the latest from A24 and looks to me to be their most promising film of the first half of the year. It starts Casey Affleck and Rooney Mara and it looks to be a haunting and ethereal experience on grief and reflection. I’m intrigued by the visual concept of using a person wearing a sheet to represent the ghost rather than relying on special effects.

Alex: Using a sheet definitely keeps the budget down, that’s for sure. It is also relevant to mention that the ghost is returning to his home in an attempt to reconnect with his wife.

A Ghost Story comes at an apt timing for Casey Affleck after his immense role in Manchester by the Sea. A Ghost Story also provides Rooney Mara with another fine film to add to her filmography and reunites her with Affleck a few years after they starred together in Ain’t Them Bodies Saints, also directed by David Lowery. I’ve recently started to gain an appreciation for her work after admiring her acting in Song to Song and realizing she’s been in a number of films I’ve really enjoyed (Her, Lion, etc).

The enormity of time also looks to be a prominent theme in A Ghost Story. Perhaps the film’s unusual choice of aspect ratio, 1.37 : 1 with rounded corners, a throwback to the silent film era, is reflection of this.

Matt: The aspect ratio choice is an interesting one, though I do think it raises some concerns in terms of the film’s potential reception from audiences. I’m always weary of decisions like this one. It’s reminiscent of last year’s I Am Not Madame Bovary. The film was shot largely with a circular lens and while it was a good film and a unique way to shoot, it diminished the home video experience significantly and made the movie really hard to watch because it essentially shrunk down the viewer’s screen. I’m always in favor of seeing movies in theaters, but I think we have to be cognizant of the fact that with the ease of streaming and limited runs of these sorts of films, indie films are more likely to be viewed at home. While A Ghost Story’s aspect ratio doesn’t look to be as jarring as I Am Not Madame Bovary, I wouldn’t be surprised to hear some negative audience pushback when it comes out on home video.

Alex: I kept expecting the aspect ratio to change while watching the trailer like it does in films like Mommy and The Grand Budapest Hotel. A Ghost Story might get some criticism for being ‘pretentious’ if the film has a deep run, but it’s not awards season and it’s A24 so I don’t think audiences won’t mind too much. They’re given some leeway by recognition of their brand. That being said, it will take me the first ten or so minutes of the film in order to get used to the aspect ratio.

Another interesting film from A24 that is out in July is Menashe (dir. Joshua Z. Weinstein). If I’m not mistaken, it’s their first film distributed that is not in English. Menashe is a semi-autobiographical story of a man recently widowed and his struggle to gain custody of his son within the Orthodox Jewish community he lives in. He has to fight against tradition while paradoxically demonstrating his commitment to faith in order to gain the respect of his community. Films like these are interesting since they’re able to teach many of us about different cultures and ways of life, even within our own country. Songs My Brothers Taught Me is a recent example of a film that provided a unique look at life (in this case, American Indian) within the United States.

Matt: Weinstein is a relative newcomer with a small resume and most of his background is in cinematography, so hopefully we can expect a visually compelling film at the least. It can be a struggle to make a culture that is so radically different from the “norm” in society seem relatable, and it’ll be interesting to see how Weinstein conquers that challenge.

An interesting film coming from Criterion this month is Robert Bresson‘s L’Argent. I expect this to be as muted and subtle as Bresson’s other films and the cover art from Criterion asks us to draw a parallel to his much earlier work: Pickpocket. I haven’t seen anything from this stage of Bresson’s career and so I don’t know much about the evolution of his style to this point. This was actually Bresson’s final film.

Alex: I can’t say I’m an expert of Bresson’s films or even of a particular period of his filmography, but I’ve seen L’Argent before and would agree that it is a very muted and understated film just as you’d expect from Bresson. I saw it back when Hulu housed Criterion’s films and they had a weekly selection with a few free films to watch. That was back when I first started getting interested in films. It was a quick way to introduce me to a lot of different directors and genres/themes within a short period of time.

What I find remarkable about L’Argent is that the premise of the film is that a counterfeit bill is used and passed along and used again without knowledge it was a counterfeit until it has disastrous implications when it is recognized as counterfeit. Bresson managed to- plausibly- make a single bill, something almost trivial, have a life-changing impact on characters’ lives. The film has been said to be Bresson’s criticism of capitalism. I’m especially glad that Criterion is finally releasing this film on home media since it was almost impossible to view in the US up until now. 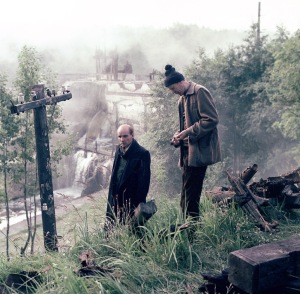 Matt: Criterion has another heavily anticipated release coming out this month: Andrei Tarkovsky‘s Stalker. The film, widely regarded as Tarkovsky’s masterpiece, was released by Artifical Eye a few months ago for the first time on Blu-ray but was met with poor reviews on the new transfer. Criterion’s 2K restoration has gotten nothing but stellar reviews.

The only criticism that I have of the disc itself is the sparse special features. Tarkovsky films have been weirdly slow in getting to Blu-ray and I’d love to get some more interesting documentaries or essays on such an impactful artist. Still, this will be one to look forward to without a doubt.

Alex: We’ve discussed this before, but Stalker was the only Tarkovsky film that I haven’t been able to ‘get’ and enjoy to the extent I have with his other films. I need to re-watch it sometime. Nonetheless, Tarkovsky’s films aren’t an easy view for any audience. They require your full thought and attention while seeing, are slower-paced than Hollywood fare, and typically revolve around high-concept themes- Stalker alone can be interpreted as a religious allegory or political commentary with its post-apocalyptic themes (Cold War, nuclear age, etc). It’s hard to describe his films without sounding pretentious, but just take our word for it in stating how difficult it is to grasp a good understanding of one of his films. I’d even argue David Lynch is an ‘easier’ director to understand.

The film is an adaption of a sci-fi book and is the first of, what I consider to be, Tarkovsky’s late works. His last three films are more dark and grim than his first four, although I will say I thoroughly enjoyed Nostalghia and The Sacrifice. Ironically, Stalker was shot using the 1.37 : 1 aspect ratio as well, but it’s a bit more common of an aspect ratio within Tarkovsky’s filmography. Which Tarkovsky films did you end up seeing? I think I remember you said you weren’t able to make it out to the theater when the Stalker restoration was in your area.

Matt: Yeah sadly I missed out on the restoration on the big screen so I guess I’ll wait for the Blu-ray to catch the restoration. Other than that I’ve only seen Ivan’s Childhood and The Mirror. Admittedly, Tarkovsky is one of my major gaps. I’ve been sort of waiting for adequate restorations of his movies to really dive in.

Alex: Ah, okay. I couldn’t remember if you made it out to see Solaris either. If you enjoyed The Mirror though, you should be able to enjoy his other films if the lengths don’t become too daunting. That’s arguably his most fragmented and difficult film to understand without doing some research after viewing.