French director François Truffaut is often attributed with saying that an anti-war film is an impossible feat, that the action and excitement of depicting warfare will inevitably smother any political protest of the act. By merely rendering armed conflict on screen, Truffaut argues that war becomes a legitimate, even thrilling, experience in audiences’ minds, and the intended message is lost. Though a number of war films have proven this wrong over the years such as Apocalypse Now, Come and See, and Saving Private Ryan, the claim admittedly holds some water, particularly in American cinema.  Clint Eastwood’s 2014 American Sniper, for example, highlights the terrible effects of PTSD on a soldier and his family, but also celebrates his violent exploits in the Middle East. The result is a jingoistic mess of a movie that fails as the denouncement of war it tries to be.  The three examples listed above, on the other hand, succeed because the horrors of war they show far outweigh any possible glorification. 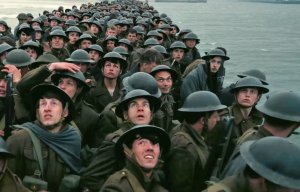 Christopher Nolan’s latest endeavor, Dunkirk, is fundamentally different than any piece of war cinema before it, and is by far his most mature directorial effort yet. Set in the early period of World War II, the movie portrays the evacuation of 400,000 Allied soldiers at Dunkirk beach through three tangential narratives: one on the beaches following a young soldier (Fionn Whitehead), the second at sea about three civilians sailing to transport troops from the beach to Destroyers, and the third an air skirmish. The film wastes no time with exposition, opening with a hauntingly silent shot of a group of soldiers walking through a deserted French town, before gunshots shatter the serenity and Hans Zimmer’s intense ticking-clock score begins. From there, there is neither a peaceful nor quiet moment until the surviving soldiers are safely sleeping on a train back home.

In Dunkirk, Nolan inventively portrays the horrors of war by removing the details that made previous films of the genre like Spielberg’s Saving Private Ryan so memorable. You won’t find adrenaline-induced slow-motion shots or landscapes of severed limbs in this movie. Instead, Dunkirk abstracts the concept of war down to its bare bones – people are coming to kill you and you must fight back or run away – transforming the film into something more akin to a horror movie. The Germans themselves are never shown on screen (barring a brief, out-of-focus shot at the end), they are simply “The Enemy”: an omniscient, menacing monster that makes its presence known entirely through rattling machine gun fire and the terrible screech of bombers diving down to drop death onto the beaches. In IMAX, these sounds are unbearably loud and utterly terrifying, making you want nothing more than to shut your eyes and cover your ears.

The feelings of dread evoked by these sounds are accentuated by Hans Zimmer’s brilliant score.  Zimmer, famous for his ability to seamlessly blend electronic instrumentation with a live orchestra, has collaborated with Nolan from 2005’s Batman Begins to 2014’s Interstellar.  Dunkirk’s score is a thoughtful step back from the sweeping organ melodies in Interstellar, taking instead a much more subliminal approach.  The score often integrates the natural noises of warfare with a dissonant arrangement of strings rising and falling in pitch, similar to the musical theme reserved for the Joker in The Dark Knight.  The most memorable aspect of the score though is undoubtedly the synthesized sound of a ticking clock which underlies nearly every scene until the soldiers are safely evacuated, like a beast lurking in the shadows waiting to pounce. The motif instills a sense of urgency and dread into its every presence, and, like the posters raining down from the sky in the opening shot, taunts both the soldiers and the audience. There is an overwhelming feeling of time running out for our protagonists throughout the entire film, carried largely by Zimmer’s tense music.

Since this is a Nolan film, it is not surprising that the concept of time is manipulated within the context of the plot structure. At the start of the film, each separate narrative arc is given a quantity of time that it will cover by the end: the beach one week, the sea one day, the air one hour. Despite the differences in where each of these narratives falls chronologically, they are crosscut as if they are occurring simultaneously. Though this playfulness with time works quite well when crosscutting tense sequences in each story, it is often unnecessarily confusing with how the three arcs line up, and the editing does little to help with this puzzlement. Repeated viewings allow for “aha!” moments when you figure out how the narrative fits together, but the presence of this time fragmentation in a war movie is questionable at best and fails to add anything of thematic substance.

Dunkirk is ultimately not an anti-war film in the same way Apocalypse Now or Come and See are, conveying neither a moral questioning of war nor an overtly anti-war message.  Besides the clunky toying with time, it’s not even a cerebral film like many audiences have come to expect from Nolan. Dunkirk is first and foremost concerned with eliciting the emotions of dread and terror associated with combat, and it succeeds marvelously at doing so. For all of its sweeping shots of open beaches and oceans, the film is incredibly claustrophobic. The anti-war message here is that war is positively terrifying, an idea that has never been so confidently expressed before. By removing much of the violence and gore, Nolan argues that simply imagining death and destruction is just as frightening as seeing it happen. The men Dunkirk portrays are in an impossible, nightmarish situation, and we as the audience are with them every step of the way.