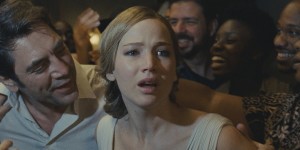 Alex Sitaras: August has come to a close as did the summer movie season. Not to fret- in the fall there’s many exciting titles to look forward to. The first of which, for me, is mother! (dir. Darren Aronofsky). Aronofsky typically directs dark psychological thrillers and mother! is his first attempt at directing an outright horror film. The film falls roughly into the home invasion subgenre and stars Jennifer Lawrence, Javier Bardem, Ed Harris, and Michelle Pfeiffer. There hasn’t been too many details released about the film yet, but various promotional items pay homage to Rosemary’s Baby and two character posters (Lawrence’s and Bardem’s characters) seem to make reference to Eden and Hell; Aronofsky is known for including religious themes in his work.

Matt Schlee: Aronofsky is a tremendously talented director and every bit of art that has come out for this film has left me more and more intrigued. It seems to fall into a space where he could really thrive as a director and I’ve always said that I wanted to see more big name, artistic directors tackle horror projects. It seems like major directors haven’t wanted to touch the genre over the last decade or so and it’s cool to see Aronofsky be willing to dive in. Especially given that he’s so directly referencing Rosemary’s Baby given that it’s one of the other great horror films directed by a big name director: Roman Polanski.

One film that I’m really looking forward to is Taron Lexton‘s In Search of Fellini. The cinephile in me is immediately thrilled by another Cinema Paradiso-esque love letter to film. Lexton is a really interesting filmmaker here as he has a few titles to his name but nothing that’s launched him to becoming a household name. Still, the positive early reviews for the 33 year old director could be a turning point in his young career.

Alex: There seems to be a slight uptick today in films about youth seeking out the celebrities/artistic figures that inspire them. Coming Through the Rye, In Search of Fellini, and the upcoming Todd Haynes film Wonderstruck are all coming-of-age films with this at their premise. What I find interesting about In Search of Fellini is that the girl was sheltered as a child and Fellini‘s work, his very eccentric work, is a source of inspiration for her. The contrast between her life and experiences in his films couldn’t be more immense. In Search of Fellini is also a love story, and we’ll have to wait and see if Lexton can successfully tie-in the emotion and self-discovery of falling in love to the story as a whole.

Battle of the Sexes (dir. Jonathan Dayton and Valerie Faris) is a film I’m also looking forward to seeing. The film stars Emma Stone and Steve Carell as two tennis players who competed in an infamous tennis match frequently referred to as the Battle of the Sexes. For Stone, this is her first role following her Best Actress win and is quite different in appearance from her starry-eyed role as Mia in La La Land. In addition to her acting in the upcoming film The Favourite, I’m looking forward to seeing what roles Stone will take on as her career progresses.

Matt: I’m a fan of both Stone and Carell and I definitely think there’s some potential for this film. That said, I’m always kind of weary of films that tackle events like this. They can be good but they can also be over-sentimental and heavy-handed. You get a certain lack of authenticity sometimes when addressing semi-recent historical or pop culture events like this. I do really like that the film is co-directed by male and female directors. Hopefully their working dynamic will play into the gender themes being addressed here.

One film that I’m really fascinated by is Loving Vincent (dir. Dorota Kobiela and Hugh Welchman). It’s a Vincent Van Gogh biopic, and from the trailer it seems to largely focus on his death. It is an animated film starring a number of recognizable actors including Saoirse Ronan, Jerome Flynn, Chris O’Dowd, and Aidan Turner. The thing that really makes it an incredible project though is that the film is animated entirely with oil paintings. The “frames” were constructed by 125 artists and must have been a monumental undertaking to authentically remake Van Gogh’s life using Van Gogh’s artistic vision.

Alex: I didn’t consciously realize that Battle of the Sexes was co-directed by a man and a woman. That’s an interesting observation actually. They do have a consistent track record in their work together, so I’m thinking they should be able to cover the subject matter without delving too much into sentimentality.

One thing also to note about Loving Vincent is that the film isn’t ‘shot’ or ‘projected’ using a standard frame rate given the even more immense number of paintings that would be required. They painted 65,000 paintings, the film is 95 minutes, so it is approximately 10-12 fps depending on how long the end credits are and how many paintings are repeated in the film. This is closer to frame rates of older animation films, and the film by no means makes any attempt to hide its animated quality (click here to view the trailer). I’m curious also if the directors reflect any or commentate on art forms themselves given that it is a *film* about an *artist* created by *animation* using *paintings*.

Matt: Indeed, it should be interesting to consider the reflection that was required to construct a project like that in such a specific and artistic way.

The Criterion Collection has a really strong lineup this month. One film that I haven’t yet had the chance to see is Michael Haneke‘s The Piano Teacher. It is about a piano teacher man who is attracted to her student. I’ll be honest that Haneke is a pretty wide gap for me. He’s one of those directors I’ve always just sort of accidentally danced around. But the presence of Isabelle Huppert here makes this as good an entry point as any.

Alex: The Piano Teacher is the first of three (so far!) collaborations between Isabelle Huppert and Michael Haneke. She was awarded Best Actress at Cannes for this film and her costar, Benoît Magimel, won Best Actor as well. It is also worthy to note that Huppert’s character is over-sheltered by her mother whom she shares an apartment with at the age of 40. Her repression manifests in sexual fetishes that complicate her relationship with her student. Haneke is known for a lack of sentimentality in his films and for being a very “cold” filmmaker. I have not seen The Piano Teacher either (although I have seen a few of Haneke’s other films) because the film hadn’t received a proper US release until now. I’m definitely looking forward to seeing this film in light of Haneke’s upcoming film Happy End (also starring Huppert) being released in US theaters this winter.

0 comments on “Most Anticipated of September 2017”