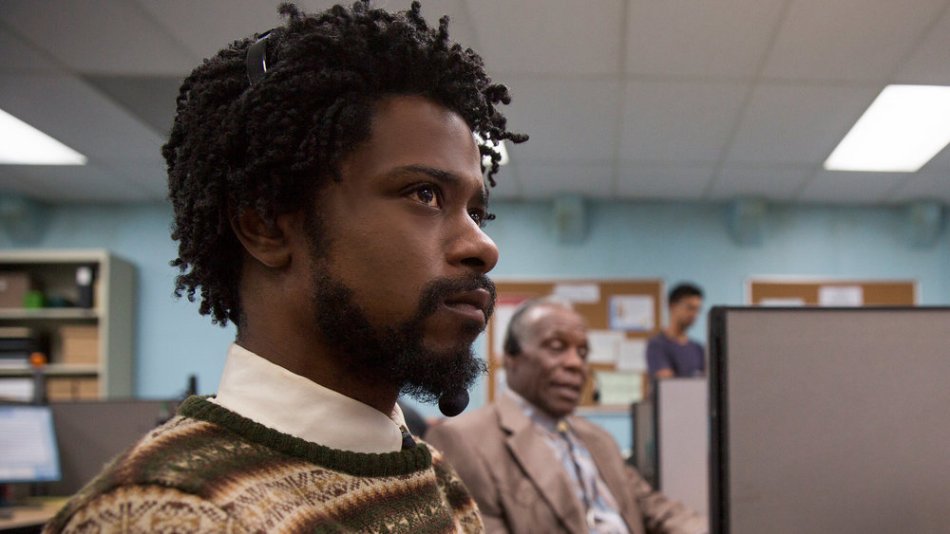 If there’s one thing rapper Boots Riley’s directorial debut Sorry to Bother You is, it’s political. Commenting with a coked-up delirium on everything from race relations to toxic corporate culture to unions, capitalism, and demagoguery, one could never mistake Riley for having nothing to say about the current state of America. One might argue Riley has too much on his mind for one film, and indeed the most glaring flaw of the otherwise well-meaning Sorry to Bother You is its remarkable lack of focus.

Cassius “Cash” Green (Lakeith Stanfield) is an everyday African American living in a colorfully disturbing, dystopian alternate Oakfield, California. In this reality, megacorporation WorryFree (led by a bro-bearded Armie Hammer) has brought back slavery by tricking the impoverished into signing away their life for food and housing. The most popular nightly entertainment in America is “I Got the S#*@ Kicked Out of Me!”, a show where, you guessed it, contestants are beaten and humiliated for wholesome family amusement. We first meet Cash in this hellish satirical landscape as he tries to con his way into a RegalView telemarketing job, before being called out on his fabricated resume and given the job anyway.

At the oppressively bland RegalView awaits a noxious corporate-cult culture, one where employees are paid exclusively in commission and vaguely promised a chance to become a “power caller” by sweaty basement pep talks. After some initial struggles, Cash soon finds his way closing sales left and right by using his “white voice”- a voice where a white actor is literally dubbed over Stanfield’s moving lips. But only with the threat of unionization is Cash actually offered a promotion, moving up to be a power caller to sell literal slave labor for WorryFree.

Boots Riley finds his most coherent- but least interesting- political message in these first two acts, placing unions on a pedestal and damning the kind of isolationist, Randian individualism found in the notion of  “I’ll support you once I’m rich”. Though Cash is initially receptive to organizing a union at RegalView when approached by Steven Yeun’s Squeeze, he finds himself predictably more allured by the prospects of wealth and status promised by becoming a power caller. Only with a memorably shocking revelation that comes around the start of the third act does Cash realize his greedy mistake, that he’s just as much a cog in the capitalist machine as his less successful, non-power caller friends.

Where the film becomes its most engaging is surprisingly when it becomes its most rambling. Sorry to Bother You’s third act is a feverish freak accident, an absurdist cyclone of unfocused political commentary hurled against a brick wall that’s as bizarrely incomprehensible and dumb as it is wildly entertaining. It all begins at a particularly crazy party at WorryFree CEO Steve Lift’s (Armie Hammer) conspicuously-modeled White House loft, and ends with one of the most off-putting endings in recent memory. Not in the abrupt, arthouse manner of something like It Comes at Night or First Reformed, but in a way that feels like someone slashed the film’s tires and we’re forced to stop along the shoulder of a chaotic highway in the dead of night.

Those last thirty to forty minutes sure are fun though. Most of the film’s humor falls decidedly flat on its face- including the poorly-dubbed “white voice” gimmick- but Armie Hammer’s frat-boy billionaire insanity definitely earns some laughs. It’s around this time that the film goes from 0 to 100 in about a split-second, and you’ll know exactly when this happens when you see it. It was also around this time that I realized the film has too much on its plate, that Riley is trying to articulate so much in one breath that his gasps for air- not his words- become the spectacle of interest. There’s a certain joy in watching him try to pull off such a stunt, but the film would have vastly benefitted from a few extra trips to the writing room.

Even so, Sorry to Bother You isn’t a waste of your time. As pointed out by the electric reception the film has received on Twitter and Rotten Tomatoes, critics and audiences are both desperate for movies with something to say- no matter how obfuscated the message- aimed at adults. Its success with audiences gives me tremendous hope for an industry where this week’s top three box office hits are Hotel Transylvania 3, Ant-Man and the Wasp, and Skyscraper. For all its many shortcomings, Sorry to Bother You is a triumphant crowd pleaser for an adult audience that is ready to think again, and is exactly the type of film I’m proud to support at the box office.