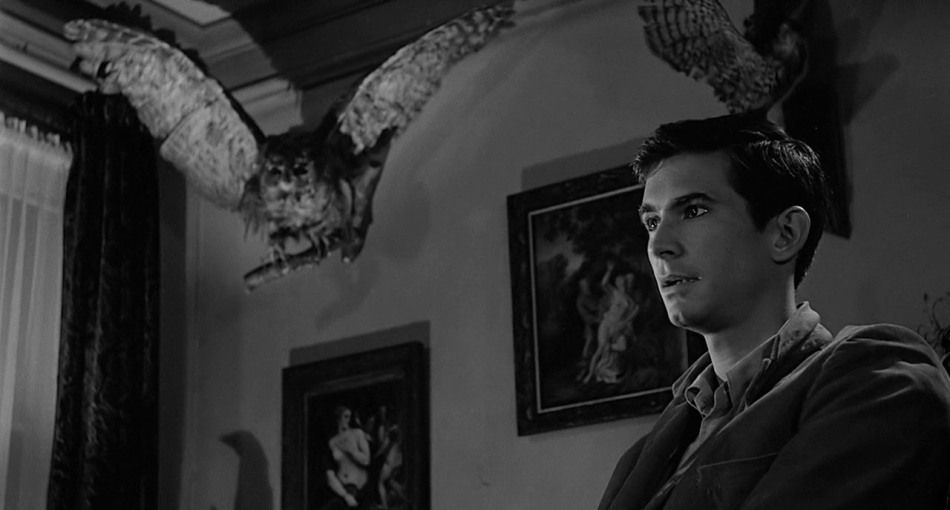 The screeching violins in Bernard Hermann’s score for Alfred Hitchcock’s horror masterpiece Psycho sound off in our ears just by the very thought of them. The elegant precision in the shower scene continues to wow audiences, no matter how many times they’ve seen it. Everything about Psycho, from the haunting performances to the shocking twist still holds up to this day. Psycho is not only a film that helped define horror cinema and the slasher genre, but forever changed the landscape of film.

In the Master of Suspense’s first turn to horror, a young woman named Marion Crane (Janet Leigh) steals $40,000 from her company to run off with her boyfriend, Sam Loomis (John Gavin). While taking the trip to meet him, Marion decides to get off of the rain-drenched highway to stop for the night. The closest offering is the mysterious Bates Motel, owned by the unseen Mrs. Bates and her son, Norman (Anthony Perkins). Marion and Norman have a long talk where she learns that the operator cares for his mentally ill mother and is kept from from having a normal social life. As Marion showers for the night, a shadowy figure stabs her multiple times with a knife. Norman finds the bloody scene and gets rid of the evidence, including the money that will lead investigators to come looking for her.

Psycho is a shocking watch today, so it is hard to even contemplate what a revelation it was in its time. Films were still relatively tame, especially the box-office draws that big directors such as Hitchcock churned out. But the unsettling and perverse source material of Robert Bloch’s novel could only intrigue the director. An adaptation would almost certainly be a rule-breaking phenomenon. While it is custom for a main protagonist to be present throughout a narrative, this film killed her off at the midway point.

Who were audiences supposed to root for now? Sam? Norman? Marion’s sister, Lila Crane (Vera Miles)? Hitchcock wanted his audience to be confused and he wanted them to feel the terror of not knowing what to expect in the following scenes, much like the characters in the film. He even took great lengths to ensure no one spoiled his film, a common practice viewers read about today (for instance, Game of Thrones).

Norman Bates’ true intentions are masterfully hidden throughout the film in only a way that Hitchcock could get away with. Camera angles and cuts prohibit the viewer from getting a glimpse at the “mother,” exhibited the best in the infamous “shower scene.” In the forty-five second scene, the director uses seventy-eight camera setups and fifty cuts, ensuring that not only isthe viewer oblivious to the killer’s identity, but neither do they see an inappropriate shot of Leigh’s body, despite her character being naked. This scene alone is a masterclass in suspenseful filmmaking and editing, still being studied by filmmakers and scholars alike. Hitchcock could have easily panned the camera away from the carnage, yet he draws the viewer into a front row seat without ever showing anything explicit.

The shower scene alone would be reason to praise Bernard Hermann’s score and John L. Russell’s cinematography, but throughout the film their contributions to Psycho craft a haunting trance in an already unsettling film. Built atop their work  are the performances of the actors. Leigh’s performance, while brief, has remained iconic among horror film fans and has earned her lifelong scream-queen status. Perkins’ performance as Norman Bates is even more legendary, cementing the villain archetype that is still studied closely today. His casting is as close to perfection as possible, a young man who, for the majority of the picture, seems and appears innocent. Yet, that last scene where Bates is in the jail cell is truly haunting. His gaze slowly centers toward the viewer as his inner monologue – in his “mother’s” voice (Virginia Gregg) – leaves the audience’s bones chilled long after they’ve left the theater.

What Hitchcock manages to create in this offering is nothing short of a masterpiece. He helped redefine the horror genre at the time of Psycho’s release and the film went on to become the archetype that all subsequent horror films would hold themselves up to. Psycho is a truly unique experience that will still have first time viewers hooked even if they are already aware of the film’s story.