This month, we explore the career of one of modern Hollywood’s most profound actors and most peculiar individuals: Joaquin Phoenix. Phoenix has starred in a number of films considered to be amongst the greatest of the last three decades and today his career trajectory continues to impress. Here we reflect on a number of his notable performances.

Still working under the name Leaf Phoenix, young Joaquin made this early film appearance at age 15 among an all-star ensemble cast. Steve Martin, Mary Steenburgen, Rick Moranis, Keanu Reeves, and Jason Robards along with many others came together for this landmark family comedy-drama. Ron Howard‘s Parenthood follows the ever-troubled Buckman family through the seemingly endless series of antics, difficulties, and misfortunes that befall all big families (and most small ones). They endure the day-to-day dramas of a son struggling with mental illness, unemployment, a lowlife brother, a rebellious daughter, and a laundry list of other major issues that get somehow filed away as mundane problems of modern life. Through it all, the movie carries an upbeat attitude and a lot of laughs.

Joaquin is far from the star of Parenthood, but as Garry, the youngest in perhaps the most dysfunctional wing of the Buckman family, he plays a moderating role. He displays a childlike joy and wonder as he playfully engages with his sister’s goofy husband, but he also shows the sort of wisdom that can only be associated with a naive character coming to understand the world in a new light. He is one of Parenthood‘s most universally endearing characters. It isn’t a stretch to say that this is Phoenix’s most wholesome role to date.

There are many things to admire about Gladiator and one is Joaquin Phoenix’s performance as Commodus. His portrayal of a son that usurps his place as Roman Emperor from his father shows a range of emotions over the course of the film’s runtime. In the early stages of the film, Commodus appears petulant but as Gladiator progresses Phoenix is able to create a character that is simultaneously frightening and vulnerable, inducing unease in any audience. The scene in which he asks his sister Lucilla (Connie Nielsen) to cuddle with him is discomforting, and the audience is fully aware that he could harm her at any moment. Similar feelings arise when Commodus discovers that Lucilla has betrayed him and he stares subtly at her whilst speaking softly and holding her son Lucius (Spencer Treat Clark), making the audience fear for the boy along with his mother. Phoenix’s ability to convey a variety of credible emotions with a subtle change in his expression or physicality has been something that has helped him become one of the greatest working actors. When I first saw Gladiator when it was released I was unaware of his talents- now when I watch it, I can see why Joaquin Phoenix has become one of the most compelling actors to watch.

It’s difficult to make a splash when crafting a biographical drama centered around a cultural giant. More often than not the aspect that encompasses the success of such a project is the talent onscreen, which is exactly where James Mangold’s Johnny Cash biopic Walk the Line wins us over. Reese Witherspoon may have taken home the Oscar for her majestic work in the film but it’s important not to overlook Phoenix’s presence too. Whilst already at a slight disadvantage thanks to not looking much like Cash (or being able to fully recapture his voice, but who could?), he dominates the tropes of the biopic and raises the quality of writing through his performance. Whilst the likes of Elvis Presley and Freddie Mercury (seem) to have had accurate representations in film down to their performances, Phoenix seems even now like the more intelligent and human choice.

His chemistry with Witherspoon is electric, and he smartly allows her to take much of the emotional weight of the story; he embodies Cash’s feelings towards June, and it’s the first time I fully felt like he transformed himself into a character for a project. Since then of course it’s become commonplace for the man to disappear behind a veil of facial hair, sunglasses and bizarre off-screen antics, but it’s interesting to note that it may have actually been the booze-soaked world of Johnny Cash that kickstarted such a phenomenon.

So maybe it’s a stretch to include Earthlings in a retrospective about Joaquin Phoenix; however, Phoenix’s decades-long support of animal rights illustrates how important he deems the cause and led him to contribute his voice as the narrator in Earthlings. At the time that Earthlings was released, 2005, there were relatively few documentaries dedicated to animal rights and Earthlings became the first of a number of ‘viral’ documentaries- Forks Over Knives, Cowspiracy, What the Health, etc- to address the topic. 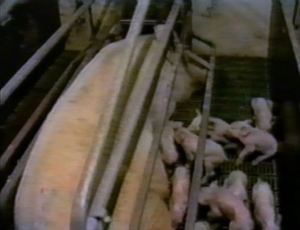 Phoenix’s voiceover of Earthlings is part pensive and part remorseful as he explores instances of how animals have been exploited through mankind’s use of them as pets, food, clothing, entertainment, and for scientific research. A viewer would be an outright anomaly if they could make it through this film without tears coming to their eyes. Today, Earthlings is noticeably dated and animal rights have improved to some extent but misinformation has led to the criticism of similar documentaries made since, resulting in Earthlings still being the de facto documentary to watch on the subject.

Since the beginning of the decade, a select few films have separated themselves from the generic fodder Hollywood usually serves, only a handful to reach the highest pinnacle of cinematic art. Paul Thomas Anderson‘s The Master is among those unquestionable additions in this select category. Watching the film, it isn’t difficult to detect why. The astonishing cinematography of Mihai Malamaire, the unparalleled directorial talent of P.T. Anderson, and the exceptional performances of Philip Seymour Hoffman and Amy Adams all contribute. However, the dynamic, vigorous performance of Joaquin Phoenix is the underlying reason for the excellence of the film. The Master is the story of disgruntled Naval veteran Freddie Quell (Joaquin Phoenix) and what unfolds when he joins The Cause, a cult run by Lancaster Dodd (Philip Seymour Hoffman).

The interactions between Phoenix and Hoffman make for some of the most tense, engaging, and captivating scenes in cinema in recent memory. Freddie’s volatile temper and resistance to authority clash with Dodd’s charismatic personality and dedication to converting people to The Cause. Yet, Phoenix continues to be spirited and zealous in every scene he’s in. During scenes on the beach while he was still part of the Navy, Phoenix’s mannerisms and actions align directly with the personality of Freddie, without uttering a word. Phoenix fully immerses himself in the role and Freddie is shown to be a complex man with hopes and dreams never accomplished and his own dark secrets he tries to suppress. The Master is among Phoenix’s best work and it help elevates the film to a loftier status among the cinematic world.

Joaquin Phoenix is best known for acting as troubled or disturbed characters, ranging from films such as The Master to the upcoming Joker film. But in Spike Jonze’s sci-fi Her, Phoenix performs as just the opposite to his typical roles- a kind and lonesome everyman searching for love- and offers us perhaps his most humanistic and relatable performance of his career. His character, Theodore Twombly, is employed as a professional writer, a writer of personalized love letters for individuals or couples who are unable to express their thoughts on paper. His job is both tragic and ironic in that he routinely creates resounding and heartfelt romantic expressions on behalf of others, but has no love in his life himself. 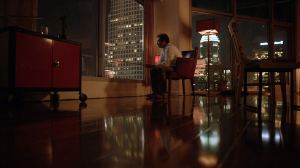 What Her is most known for, however, is not the character of Theodore, but rather the character of Samantha (Scarlett Johannson), an OS with artificial intelligence who becomes Theodore’s lover. Her generated quite the controversy and unease in many a viewer when the film premiered in 2013 (today with Alexa and Siri the film’s premise is less and less distanced from reality), but Phoenix’s performance as Theodore as well as standout performances from Johansson and Amy Adams enable Her to be one of the most thoughtful and heartfelt explorations of intimacy and love that we’ve seen in cinema in recent years.

Paul Thomas Anderson’s Inherent Vice is a truly confounding work. Centering around Doc Sportello, a private detective in Los Angeles, putting together the plot of Inherent Vice feels like trying to make one single image out of pieces from multiple different puzzles. As Sportello, it is on Joaquin Phoenix to somehow make this all come together. Acting as though he is in a drug-induced haze for the entirety of the film, Phoenix sells it tremendously well. This is a complex film where Doc has no idea what is happening or if anything is even happening at all. The film’s strong supporting cast all playing characters on their own missions which may or may not involve whatever thread Doc thinks he is following.

Phoenix is able to feed off of the film’s weird energy in capturing the bewilderment and the dedication of this man. He may have no idea what is going on, but he is determined to find out whatever answers may exist. He is able to delve into a character who tries to interject into the plot but largely watches as it happens around him, stumbling into details and chaos, while always remaining more than a little bit high. For an actor who seems to find himself in a lot of dark, incredibly intense roles, Inherent Vice feels rather unique in his filmography.

Though Lynne Ramsay’s You Were Never Really Here often floats above the audience as a kind of bizarre experiment in editing and style, Joaquin Phoenix’s Cannes Best Actor-winning performance exists as the film’s one and only firm tether to reality. As Joe, a hitman who rescues trafficked girls, Phoenix proves the point that most method actors today seem to miss: less is more. What Phoenix does in front of the camera could at times hardly be called acting; he doesn’t say much, and he certainly doesn’t contort his face in grand expressions of emotion like an Oscar-winner might. He simply exists as his character, immersing himself completely as a war-battered veteran drifting on the outskirts of the real world. 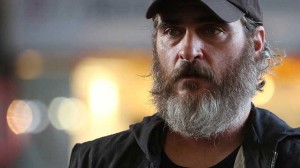 The film’s disjointed narrative provides very little information of substance about Joe, but ultimately we don’t need it, because Phoenix does all the heavy-lifting himself. Watching him wrestle with the disconnect between his hulking, brutish appearance and his boyish insecurity underneath is fascinating, and it provides a far more convincing explanation for his character’s vulnerability than any piece of dialogue ever could. I’m not sure if I’ve ever seen a modern actor so thoroughly embed themselves in their role, but I am certain that cinema would be better off if more actors could perform like Phoenix.

0 comments on “The Films of Joaquin Phoenix”