Directed by Dario Argento. Music by Ennio Morricone. Shot by Vittorio Storaro. Is there any wonder The Bird with the Crystal Plumage is great? One of the best Italian giallo filmmakers teaming up with one of the best composers and one of the best cinematographers in the world. It is no wonder that this often quite scary and thrilling giallo is bolstered on both fronts by Morricone’s unsettling composition and by Storaro’s daring camera angles. Though The Bird with the Crystal Plumage is Argento’s directorial debut, it was hardly his first job in Italian cinema, having previously served as a writer on a number of films, including Sergio Leone‘s Once Upon a Time in the West. It is with the skills he learned through those productions – as well as those learned from mentor and Italian horror legend Mario Bava – that he approached his debut. What a debut it was.

The first entry in what would become known as Argento’s “Animal trilogy” – The Cat O’ Nine Tails and Four Flies on Grey Velvet being the others- The Bird with the Crystal Plumage finds American writer Sam Dalmas (Tony Musante) living in Italy. He laments the time he has wasted in the country, hoping its tranquility would help him write but instead finding himself becoming progressively poorer and having to accept a writer-for-hire job on a book about rare birds. Now, he is set to return home with Italian girlfriend Giulia (Suzy Kendall), admitting defeat. However, on his way home from picking up his lone Italian paycheck, he sees something remarkable: a woman is being stabbed. Set inside a museum with an all-glass exterior, he can see quite plainly as a woman in white struggles with a figure in all black before collapsing on the floor, bleeding from her side. Desperate to help her, he runs into the first set of glass doors, only for them to lock behind him, while another set of glass doors separate him from the woman. Though the cops arrive shortly, it is an event that spur Sam into finally finding his purpose in “peaceful” Italy. He is determined to discover who stabbed the woman, believing the mysterious figure to be  responsible for three recently murdered women in the area.

From there, The Bird with the Crystal Plumage follows a typical giallo plotline, balancing slasher-like kills with an investigation conducted by Sam and the local police. Trying to decipher the mysterious phone calls they receive from the killer and with Sam making headway- including finding a key painting of a violent sexual assault that proves crucial- he becomes even more entangled in the chaos. The film derives its thrills and scares from both the kills shown on-screen and from the danger Sam soon finds himself in. There is a great chase scene through the winding and off-balance streets of the city that is impressively staged, taking Sam and his would-be assailant through various odd areas. Argento finds consistently interesting and unique areas for the chase to unfold, delivering quite a few tense moments.

However, while the staging and plot often provide great thrills, it is often that work of Morricone and Storaro that creates the most  suspense. A scene near the beginning after Sam has seen the stabbing employs a great, nervy musical array to convey tension. Perhaps the best representation of the film’s use of music and visuals to elicit terror comes as a woman is set to be killed. Before the kill, as the film does repeatedly, she had been seen through a camera lens as the killer stalked her. Odd and creepy, yet upbeat music accompanied the photos, creating a wholly unsettling feeling. As she gets ready for bed and then lays down while smoking a cigarette, Storaro uses a point-of-view shot as she casually stares ahead at the doorway and then turns her head slightly. Suddenly, as she turns back revealing the killer in the doorway. Morricone’s score rapidly intensifies, growing increasingly nerve-wracking  and terrifying as the killer approaches her. It is a frightening scene, one that is indicative of the film’s immense ability to scare- which it does quite frequently, especially as the identity of the killer comes closer to being unveiled- while making full use of its technical elements. 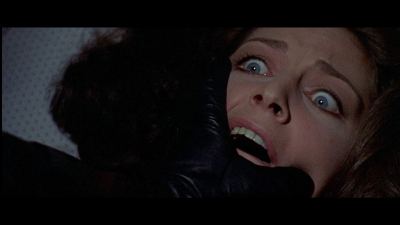 The visuals of Vittorio Storaro further excel in a way that is not too unusual for Argento. In his later films, Argento especially leans on uncomfortable camera angles and other twisting  or craning movements. Uncomfortable overhead shots from the top of a triangular staircase in which the killer looks down at a victim that cuts to a shot of the victim looking up the same staircase feel lifted out of Mario Bava’s Kill, Baby, Kill (though it was a spiral staircase there) possess a similar disorienting effect. Of course, the visuals of Storaro work in perfect harmony with Morricone’s score, with the repeated shots of the terrifying painting being all the more ominous due to the music. As the camera slowly moves towards the image, Morricone’s gentle and almost mystical notes are heard in the background, creating a chilling aura around the painting. It fits, given the role it plays, but it proves jarring and hypnotic even if not tied to significant elements in the murders.

One of the defining films of giallo and of Dario Argento’s career, The Bird with the Crystal Plumage is a brilliant film. It may not have the color work that Argento is now known for from Suspiria and Inferno, but it nonetheless serves as an excellent representation of the terror he can create. The Bird with the Crystal Plumage firmly established Argento as one of the defining figures of Italian horror. Argento’s strong direction, Morricone’s effective score, Storaro’s striking cinematography all combine into a film that is packed with suspense, thrills, and visual terror.

0 comments on “Fright 21: The Bird with the Crystal Plumage”