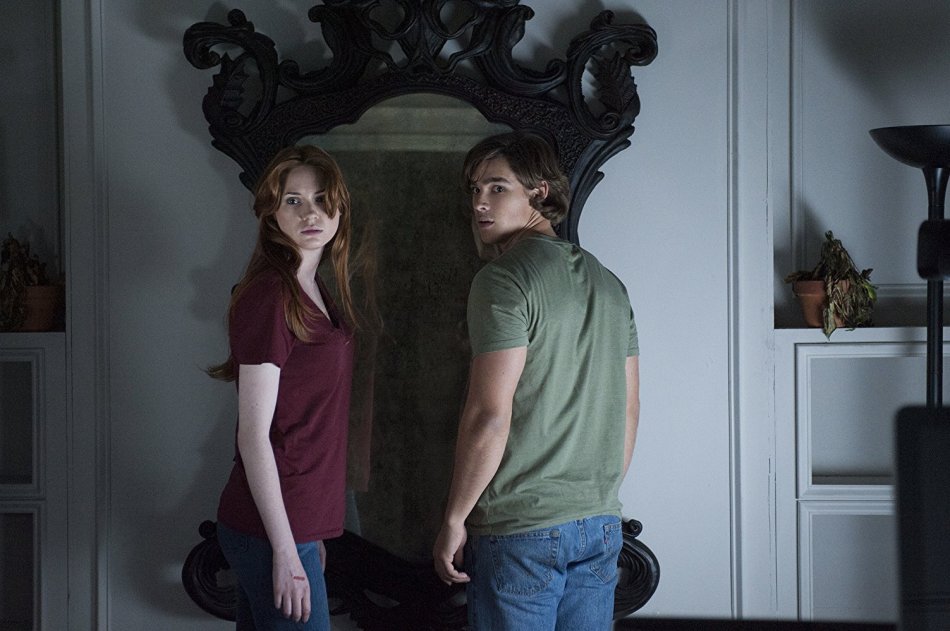 “Hello again. You must be hungry”. 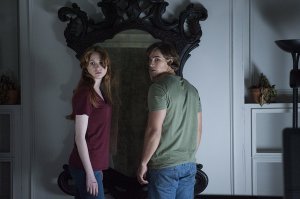 A well executed idea is like a goldmine, it forms a solid structure that can keep you going and be intensely rewarding to those who are lucky enough to find what they want inside it. Hot off the tail of his little indie horror darling Absentia, writer/director Mike Flanagan knew he had prepared himself to continue a story that had been burrowing into his skull for years… the story of a haunted mirror. Obviously there’s more to Oculus than that, but Flanagan knows that we’ve all debated the validity of our reflections at one point or another. He knows our unease of an object whose sole purpose is to simply reflect, to divert attention to whatever else is around it. It’s a perfect monster in hiding.

The main plot of Oculus focuses on siblings Kaylie (Karen Gillan) and Tim (Brenton Thwaites) Russell, who witnessed the grizzly murder of their mother Marie (Katee Sackhoff) by their father Alan (Rory Cochrane) eleven years earlier. After murdering his father at the age of ten in an act of self-defense, Tim was sent to a mental institution whilst Kaylie held onto the belief that the strange antique mirror in their dad’s office was to blame for his violent and erratic behaviour. Thus, upon Tim’s release into the real world eleven years later, Kaylie is the first face he sees and is more than happy to let him know she’s found the same mirror, ready to prove his/their father’s innocence and destroy it once and for all. Flanagan and co writer Jeff Howard cleverly get the majority of the background out of the way within the film’s first ten minutes, setting up for a duality of experiences, as the sequences of both the present evening and the startling night eleven years ago are told simultaneously, allowing the tension to barely let up throughout the film’s 100 minute runtime.

As an expansion of his award-winning 2005 short Oculus: Chapter 3- The Man with the Plan, originally intended to be a series of shorts about the history of a haunted mirror, Flanagan’s feature-length version directly adapts the original, chilling material, and it’s a testament to both his strength as a storyteller in terms of writing and visual display that Flanagan’s short film  loses none of its potency when stretched out to a feature. To balance out pacing and structural issues, Kaylie and Tim’s nights swap back and forth, mirroring (hehe) the warped and distorted thought processes the antique uses to drive people insane. There is no set list of rules for the cursed object, and despite an extensive backstory its origins are never revealed. Flanagan states author H.P Lovecraft as a key inspiration for this, stating that how spirits and happenings stay in your mind more when they’re from the unknown, and that “evil in the world doesn’t have an answer”.

Gillan (Doctor Who) is headstrong and likable, presenting Kaylie as the sophisticated woman who has been arming herself against an evil she swore herself against a decade before. But this isn’t Jamie Lee Curtis’ Laurie Strode version of arming herself. Instead of dumbbells and firearms Kaylie encases herself in research and logical thought, as portrayed in one of the film’s most unsettling scenes as she lists off the mirror’s dark history and the trail of blood it has left from owner to owner to a set-up in their father’s old office, all the while a barrage of technology and equipment hums and ticks around her with reminders to eat, drink and stay concentrating on the world around her as to not let the mirror dupe her into the same fate as her parents. Her conviction is what sells the terror here, as she has taken every possible precaution when assembling the film’s experiments, with a dozen timers, camera setups and a grizzly failsafe that Chekhov himself wouldn’t want to glimpse at. All of this hammers into your head how dangerous the static artifact truly is, and once its power begins to seep into the film the audience still doesn’t feel ready for what’s about to happen. 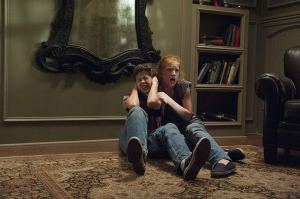 Thwaites’ Tim is the cynic of the film, forced to accept that what happened during his youth was a figment of his imagination. He takes on the role of the audience’s grip on reality – and it’s a pretty strong one too. Whilst segments of the incident years ago play as a backdrop, Tim lists off the multiple ways the events can be seen and how memories themselves can be altered if you really wish to see things a certain way. Upon my first viewing this is where I began to believe the film would take a more psychological approach, as the blending of the two nights began to entwine effortlessly together and create a cacophony of nightmares. It’s a testament to both the performances and the script that multiple times I found myself doubting both Kaylie and Tim – the mirror had started to affect my train of thought too.

“You see what it wants you to see”.

When Flanagan was originally approached to adapt his short into a feature, studios desired to develop the project as a dreaded ‘found-footage’ film, to which he declined multiple times until he was offered the chance to film it traditionally. Cinematographer Michael Fimognari and him craft a slow-burning style, with tracking shots and minimal handheld camerwork which gives the film restrained cinematography amidst the chaos of the timelines. Alongside director James Wan (Saw, The Conjuring), Flanagan knows how to present horror without taking shortcuts and can craft tension out of thin air. His use of jump scares is limited, and even when they occur they feel earned as they do throughout his later work too (Hush, Ouija: Origin of Evil, Gerald’s Game, etc). It’s also interesting to note that the concept of grief is firmly explored throughout the film’s topsy-turvy plot, though it’s not dwelled on unfortunately due to the length of the film and is something that his later work on the brilliant The Haunting of Hill House will take full advantage of.

But what would a horror film be without a spot of blood? Well, quite a lot actually. Oculus is an incredibly pristine-looking film thanks to the abandoned location and directing style, and Flanagan smartly treats gore as a set-piece, racking up with small snippets and clues alluding to future mishaps that result in a gush of red. One particular scene involving an apple continuously has me clenching my fists in discomfort every time. It’s nothing revolutionary, sure, but the high quality of what’s on display here makes Oculus an often-overlooked gem within the genre, especially for enthusiasts looking for something a little meatier than what they might get from other films.

It would be a crime not to talk about two other incredibly committed performances within the film’s interwoven flashback sequences. Katee Sackhoff (Battlestar Galactica) delivers a fractured, uncomfortable performance as the mother Marie, and her transformation after succumbing to madness from  the mirror is as physical acting as she’s ever done. She leaps and twists along the corridors of the house, lunging at the children with violence in her step and an overwhelming sense of animalistic intensity; it’s just a shame she’s not had as much luck within the genre since. Annalise Basso (Captain Fantastic) on the other hand portrays a young Kaylie with the depth of an onscreen veteran, effortlessly able to slip between the childish nature of her young mind and the desperate fight or flight instinct needed to survive her sanity-void parents. Flanagan has since teamed up with her again for the unfairly-good Ouija:Origin of Evil to provide her with a solid basis for a future scream queen who would rank with the very best, and it’s a performance that extends on what Karen Gillan is able to bring to the table.

With an open ending and apparent endless mythology to play with, Oculus was deemed the start of a new franchise upon its release; however, no sequels were made. Whilst I would be open to more mirror madness, this allows the film itself to exist as an entity, much like the mirror. It’s a time-hopping horror mystery, masterfully presented by a director who’s now in charge of adapting Doctor Sleep, the sequel to Stanley Kubrick/Stephen King’s very own The Shining… and if that doesn’t peak your interest, then I don’t know what will.