Green Book is a film about journeys: not only the literal journey that the two main characters embark on into the Deep South, but mental and emotional journeys through hardship and trying to find your identity and your place in the world that is simultaneously changing and standing still. It’s a funny and charming, yet stern and serious crowdpleaser that leaves you smiling and wondering about how you treat others. Green Book has a simple story at its core. It’s the story of Tony Lip, an Italian-American bouncer in New York City (Viggo Mortensen) as he is hired to drive an eloquent, well-educated, African-American pianist named Don Shirley (Mahershala Ali) through the Deep South in early 1960’s America. They encounter exactly what would be expected from refusal to stay at a hotel or a meal at a restaurant to odd stares due to the reversal of roles of a white man acting as chauffeur to a black man. 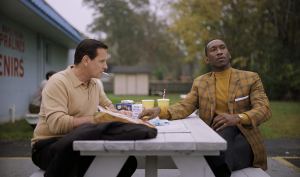 There are plenty of details to admire about the film and one of the most striking is how the film builds its atmosphere and puts us directly into each scene. The set decoration and production design feels remarkably modern and nostalgic. Every detail in Tony’s apartment gives a glimpse into his life and harkens us back to that time. The same feeling occurs in Shirley’s suite. You gain a specific glimpse into each character’s life and you get a sense of what kind of person they are and how they conduct themselves to others. This film is about a classical pianist, but it’s the non-classical music that immerses us in the time the film is set. Using music from revered and well-known popular musicians from the time such as Aretha Franklin, Frank Sinatra, and Chubby Checker that plunges headfirst into their world. I felt as if I wasn’t in the theater- rather I had been transported to the passenger seat of the car and was gazing upon real interactions between Don and Tony.

However, what gives Green Book its full effect and drives the film forward are the two main performances by Ali and Mortensen and the undeniable chemistry between them. Viggo plays the stereotyped tough, abrasive Italian-American who uses brute force to push others around and get what he wants. He is loud and talkative, he could shovel food down like no one else, and can best anyone in a fight and Viggo plays the role with vigor and heart. He is believable and life-like on screen. However, what makes Viggo’s performance so fantastic aren’t the big moments of tension and firepower but the smaller, tender moments with his family and writing letters to his wife. Viggo completes the character by giving by expertly showing us the side that was kept hidden from public view, he gives a human and affectionate portrait of the ultimate tough guy persona.

Mahershala Ali executes his role perfectly as well. He is articulate and obscenely well-educated and carries a sense of a tortured genius not only because of his own mental agony but also because of his past demons. Still, he carries himself with dignity and a privileged air. Ali’s magnificence is fully shown in a few key scenes that accentuate Shirley’s character and inner turmoil. One of those crucial scenes occurs during an argument with Tony. It comes to a heated conclusion when Ali shouts about how he isn’t black enough because he isn’t engaged with African-American social and cultural dogma of the day and he isn’t white enough because of the color of his skin. He ponders his place in the world in which he lives because he has no clear and defined space to operate. Despite their two different characters and personalities, both actors elevate the other by their chemistry together. They effortlessly bounce lines and ideas off each other and get along despite their different backgrounds. It really elevates the film above a standard 1960’s America racism-is-bad narrative. It adds a human component to already dynamic characters instead of assembly line-esque, stereotypical characters.

Green Book is all about the journey both literal and figurative. Both characters experience some form of self-discovery throughout the runtime and the actors work in tandem to hoists the film to new heights. You will leave the theater with a warm sensation in your heart and a contemplative feeling in your mind. Green Book is a for sure crowdpleaser and artistic accomplishment at the same time.