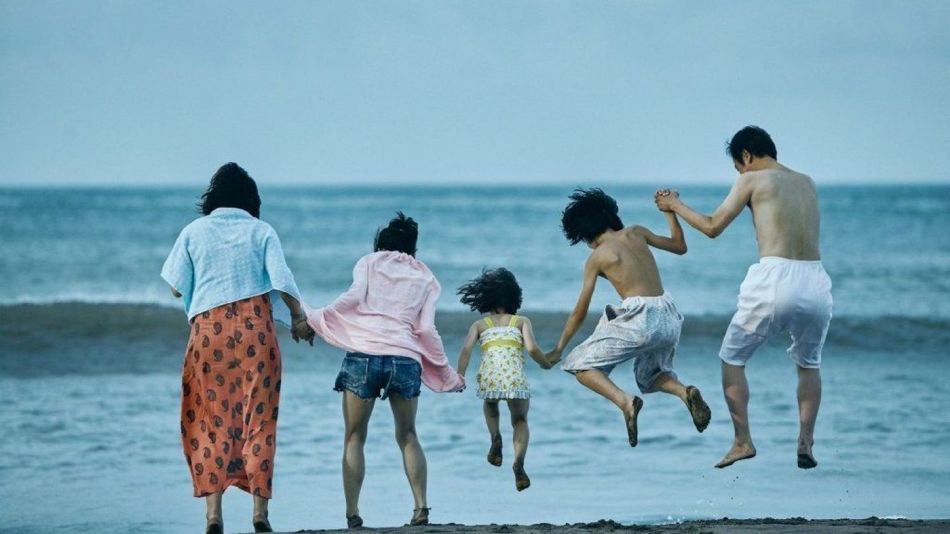 Before the title card for Hirokazu Kore-eda‘s Shoplifters has even graced the frame of an immaculate Japanese supermarket, we have already fallen in love with two of our principle characters. Warm, quiet notes of piano punctuate the silence between Osamu (Lily Franky) and his son Shota (Kairi Jō) as they prepare to execute their latest shoplifting spree, gesturing quietly to one another with shimmering eyes and devious smirks among the oblivious other patrons. It’s the subconscious sense of familial pride with which these two unlikely delinquents commit their grocery store robbery that leaves the strongest impression, the feeling that this is a pastime for them, a long-awaited opportunity for father and son to bond with one another.

We gradually become familiar with the other members of the family: Nobuyo- mother figure of the family (Sakura Ando), Aki (Mayu Matsuoka)- a twenty-something stripper of sorts with an apparent longing for a real relationship, Hatsue (Kirin Kiki)- an elderly grandmother equally fond of Aki and sarcasm, and finally young Yuri (Miyu Sasaki)- a young girl whom the family adopt (or kidnap, depending on your perspective) to emancipate her from two abusive parents. They all live impoverished together in a cramped Tokyo shack, wholly devoid of both walls and privacy, but they seem happy. Over the course of the film’s first 90 or so minutes, Kore-eda permits us ample time to just sit and live with them. Through its relaxed style- downplaying the need to edit around a room and instead affording greater priority to the naturalism of performances- Shoplifters wants us to truly get to know the Shibata family, and just as importantly needs us to understand their unique ethos.

In his quest to deconstruct the notion of family, Kore-eda draws much attention to the rituals of a household. There is the primal chore of gathering, completed of course in the form of shoplifting by Osamu and Shota, later including the young Yuri despite her youthful clumsiness. There’s also the simple act of eating together and conversing over the delicious food they consume (and occasionally obtain legally). Over the course of their interactions, we come to empathize them as people, but we also begin to suspect something is off about them as a nuclear unit. Their relationships to one another, while genuinely affectionate to a familial degree, don’t feel quite right, and any legitimate biological connection seems doubtful the longer the film goes on.

By stripping away the literal bond of blood that would otherwise hold the Shibata family together, Kore-eda is posing a deceptively straightforward question that is predictably impossible to easily answer: what makes a family? It’s a dilemma that looms over and even threatens the group more than once in their internal strife and brush-ins with the law alike. It’s also a predicament that is never answered for us. Yes, the “family” certainly enjoys each other’s company, but what is truly keeping them together in their small slice of the world? At one point, one of them cynically assesses that it’s financial necessity, a pessimistic assertion that nonetheless appears a tragically valid conclusion for one of the characters late in the film.

Even with all their imperfections and countless human failings, it’s impossible to deny the existence of some unspoken force pulling their orbits into sync. There is true love between the Shibata family, as close as there would be in any family. Maybe even stronger love, Hatsue suggests, since normal families aren’t formed by choice. Kore-eda captures this sociological dialogue with the keen eye of both a neorealist and a humanist. He’s unwilling to overlook the family’s failings, which at several crucial turning points knock them off their feet, but he’s also madly in love with them as people. The quiet poignancy of watching them enjoy a pleasant afternoon on the beach could not exist if the Shibata family was a mere facade for individual selfish survival. Nor could a particularly eye-watering moment in which Yuri is more or less officially brought into the household with a simple hug.

It’s only in the final act, in which previously unknown skeletons emerge from the family’s past to strain their very existence, when Kore-eda is able to fully explore the themes he has been patiently bringing to a simmer. He approaches this series of devastating catharses with a defeated honesty, and ultimately leaves his audience with two unforgettably poignant final shots that perfectly encapsulate the definition of yearning. Never, even when crushing blows are dealt, does Kore-eda betray his audience with melodramatic histrionics. To do so would be taking a noisy jackhammer to every emotional foundation this film had carefully constructed.

In a year of excellent films, Hirokazu Kore-eda’s Shoplifters is truly one of the best, a masterfully subtle work of loving humanist art that’s as heartwarming as it is heartbreaking. There are very few films that ever cause me to tear up, whether from rage (BlacKkKlansman) or horror (Come and See), yet Shoplifters draws its characters and relationships so exceedingly well that it started to get to me in exactly two separate scenes. It’s a profoundly worthy recipient of the Palme d’Or (even in the year of Burning and Cold War), and it’s a film that emphasizes with the gentlest of reminders that it’s the quieter moments of happiness that matter the most.