Ya know, I used to live like Robinson Crusoe; I mean, shipwrecked among 8 million people. And then one day I saw a footprint in the sand, and there you were. – C.C. Baxter

As The Apartment begins, C.C. Baxter (Jack Lemmon) finds himself amongst a sea of desks in his office. The typewriter ticks away as he works. He does not really stand out among his co-workers, except for one major difference: he makes his apartment available for some of the top-level brass to entertain their mistresses. It is this setup that leads into the events of The Apartment, as Baxter wades this endless sea of anonymity, only finding any attention from his bosses who want his apartment or his neighbors who decry the noise inside. He assures himself that, at the end of all of this, a few promotions await him and they do. They will come around the corner, especially once he befriends the head of human resources, Mr. Sheldrake (Fred MacMurray). The world is laid out before him at work, but Baxter is still unhappy. He is losing hope on his isolated beach, believing that he will never be found.

His belief is not too far-fetched, especially in a romance that seems largely aromantic. Writer/director Billy Wilder never sugarcoats reality or how hard romance can be. The men he works with all cheat on their wives, either in his apartment or wherever they can go. They, especially Mr. Sheldrake, will have a fling with a woman, lead her on, promise to leave their wives, and then dump her for the “newest model”. They change mistresses like they change a leased car, doing it on a yearly basis and with little affection. Meanwhile, both the women they dump to the side and their wives are left heartbroken by their actions. Fran Kubelik (Shirley MacLaine) is one such woman, Sheldrake’s latest mistress. Her romance with Sheldrake, his careless treatment of her, and her eventual suicide attempt, all fill the runtime of The Apartment with a decidedly cynical look at love. Baxter seems hopelessly detached from reality, desperately searching for true love in a world so hopeless.

He is, effectively, shipwrecked. He admits as much, comparing himself to Robinson Crusoe in the process, looking hopelessly up into the sky for a sign that civilization has found him. The world of The Apartment is so hopeless, so cold and stiff. Trying to find something with meaning is nothing but a fool’s errand. Those who hold out hope are stepped all over, used by those who have shut off affection in favor of pleasure. This is mirrored in both romance and business. Though Fran and Baxter may have their moments where they feel as though they are on top, there is always a reminder waiting around the corner for where they stand in this world. They are both “nice”, and the  more ruthless will walk up and take what they want from them at a moment’s notice. Both roll over and take it, practically tricking themselves into thinking it is just the price of being in love with a married man or trying to move up the corporate ladder. While they try to take an optimistic view of the world, the rampant cynicism that follows them at work and at home threatens to demolish their sense of self. Worse, they are at risk of giving up all hope and accepting their sad lives as a permanent fact, with happiness nothing but a foreign concept.

Surprisingly, this is what makes The Apartment so romantic. Not only do these two lost souls find one another, but they do so in the course of taking charge of their loves. Neither find fulfillment in being “took” by the men they hang around with, whether there merely for sexual pleasure in Fran’s case or there to provide a spot for the sexual tristes in the case of Baxter. It is only when they throw caution to the wind and embrace the opportunity right in front of them that they actually find what they have been looking for. They had been lulled into a routine cycle of dehumanizing work that made them into a mere slave to others’ needs or a cog in a wheel. 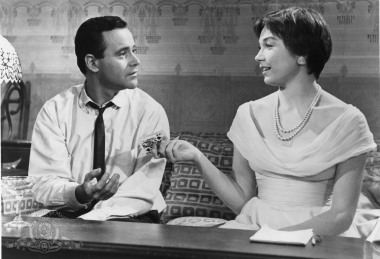 As Fran sits there on New Year’s Eve, she says, “Ring out the old year, ring in the new. Ring-a-ding-ding.” For her and for Baxter, the years seem to blend into one another, creating a dream-like state where it all means very little. All around Fran are happy revelers in this moment but the camera of DP Joseph LaShelle stays focused on her, surrounded by noise, but framed in isolation. The joy of the others celebrating the new year is juxtaposed with  her solitude, distant from everyone else in the room, even if Sheldrake is talking to her (of course, he never even noticed she left mid-conversation). As she runs to Baxter and as they restart their game of gin rummy, The Apartment hits on a sweetly sentimental finale. Wilder retains his wit – Lemmon boyish and gleeful delivery of the line, “I love you”, matched by MacLaine’s sweet, “Shut up and deal” is a great romantic – and delivers the heartwarming finale the film seems almost unlikely to reach. Baxter himself doubts it, having already begun packing to leave town. Perhaps it is some New Year magic awakening them to this romance, but perhaps it is something more. In a sea of deceit and dishonesty, two people were lulled into leading the same life as everyone else with nothing but unhappiness. It is only through their connection, through the largely unstated significant bond that they are able to wake one another up from the dream state they wade through daily. Rather subtly, The Apartment stands as a testament to true love in the face of great odds and the failure of others. It is pure movie magic, providing an infectious energy and leaving viewers with a goofy smile on their face as these two lost souls finally see who left the footprints in the sand.

A wonderfully funny film loaded with iconic lines, The Apartment is a film that grows on me with each watch. Jack Lemmon and Shirley MacLaine bounce off of one another while the sharp script from Billy Wilder and I.A.L. Diamond reveals fresh intricacies and sharp lines each time. It may have a bit of an unconventional premise- especially for the era- but it is something that it turns into magic. Finding Wilder as cynical as ever in this setup, showing the perils of love, the corruption of business promotions, and the impossibility of marriage, The Apartment turns his own sensibilities around once it settles into its romance. All of that cynicism is worn down, turning into a truly sentimental result that sets hearts racing and affirms that, even if all other love has an end, perhaps this one is so deeply felt and real that it will prevail. Or if not, then perhaps just this moment, spending time with someone who loves you, will be enough in the end.

0 comments on “The Apartment: Love in a Hopeless Place”