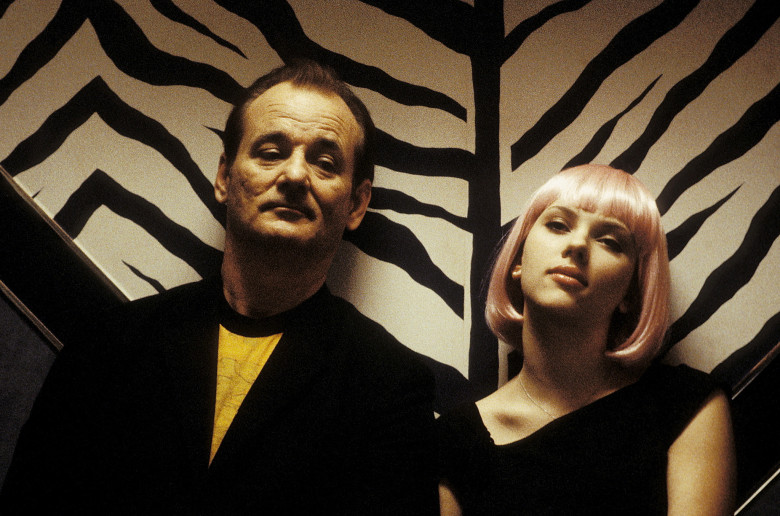 Many of the best romantic films embrace the characteristically visual nature of cinema, expressing their stories of love literally through the notion of “show, don’t tell” in a manner with which other mediums simply cannot. While dialogue-heavy films like Richard Linklater‘s Before Trilogy or Rob Reiner‘s When Harry Met Sally are certainly staples of the genre, they are not as inherently cinematic in their style as something like Todd Haynes‘ Carol or Luca Guadagnino‘s Call Me By Your Name, two romances that emphasize warm silences and longing gazes more than charming conversation. Perhaps more than any other art of storytelling, cinema is able to convey, through a varying blend of camerawork, editing, and music, the feeling of being in love. Sofia Coppola‘s 2003 achingly romantic masterpiece Lost in Translation takes cues from both schools of thought, making marvelous use of the cinematic tools available to it and the relatable charisma of its leads to deliver a beautifully understated tale of love.

Lost in Translation opens in Tokyo, following the intertwining paths of two hopelessly lonely individuals: Bob Harris (Bill Murray), a washed-up movie star in town to film a whiskey commercial, and Charlotte (Scarlett Johansson), an aimless college graduate married to a neglectful Hollywood photographer (played by Giovanni Ribisi). Their respective miseries are introduced individually and played with a kind of ironically depressing humor. Charlotte spends her days in her tiny hotel room, smoking cigarettes and listening to self-help CDs while her husband is out schmoozing with celebrities. Bob is contrastingly doomed to waste his time in endless commercial shoots, where lengthy instructions from the director are (quite hilariously) lost in translation from Japanese to English. Charlotte and Bob are firmly established to be individuals in a state of perpetual isolation, trapped by their loneliness and despair, further secluded by the language barrier of Japan and strangers to the alien, overwhelming aesthetic of Tokyo.

It’s only a matter of time before their paths cross in the hotel bar, a lonesome locale that both foreigners independently frequent to combat the jet lag-induced impossibility of sleep. Their attraction to one another is gravitational, born out of mutual desperation for the basic human connection not afforded to them in their regular lives and especially not abroad. Despite their conspicuous age difference, the two quickly hit it off, arriving at an unspoken understanding of sorts that both merely covet a confidant with which to brave their crushing seclusion. Their resulting relationship blossoms into nothing short of profound, never approaching the realm of taboo. Indeed, despite the film’s suggestive opening image, Lost in Translation gradually makes it known as a film averse to the banality of lust. This is no steamy romance novel, nor is it electrically hopeful like a Before film. Bob and Charlotte are but two tired strangers who have found each other’s company more desirable than solitude. By stripping away the overt sexual tension that many romances can’t help but depict, Coppola allows her film to breathe as a much deeper portrait of longing and affection.

The relationship between Bob and Charlotte is truly one of the most uniquely understated and strangely compelling in all of romance cinema, sharing a bond so subtly affectionate that one would be hard-pressed to imagine another medium that could do it proper justice. Like Carol, Lost in Translation conveys its aching tenderness through careful editing and tasteful shot composition first, conversation second. Bill Murray and Scarlett Johansson’s intelligently exhausted performances allow this to work, rejecting the need to ever act more than necessary and instead letting their characters’ respective exhaustions live through them. It matters little to the film that real romances aren’t formed by comfortable silences and apparently telepathic links, because its ultimate goal is to convey the feeling of connection- and the necessary fulfillment it provides- more than anything else.

In the hands of a lesser director, Lost in Translation could have become a deeply uncomfortable mess (see: Woody Allen), but Sofia Coppola clearly understood what she desired to accomplish in her film and made it happen on screen. An unconventionally mature realization of the necessity of companionship, Lost in Translation is both one of the most easily enjoyable romances and a quietly prophetic portrait of the isolating loneliness of 21st century relationships. Through its eccentric setting, understated performances, and assured direction, Lost in Translation articulates the indispensable value of finding someone who simply understands you.