It’s instinctive to refrain from calling raunchy teenage comedies ‘high art’ no matter your love for John Hughes’ work in the 80s or how many times you watched Superbad as an adolescent and found yourself yearning for a night that recontextualised your outlook on life. There’s something to be said for those comedies that can successfully merge the coming-of-age outlook with jokes designed to make your orifices explode with whatever drink you’ve brought to the theatre with you. I don’t think anybody would have expected actor Olivia Wilde’s (Rush) directorial debut to nail the sporadic, heightened-senses feel of a tumultuous night out to this extent – let alone be the the name behind one of the best comedies of the year.

Booksmart refreshingly sticks to its two female protagonists like glue – and they’re great company. Academic superstars Amy (Kaitlyn Dever) and Molly (Beanie Feldstein) are our guides on the eve before their graduation, having spent their entire educational career sticking to the rules and obeying every law under the sun in order to get into their chosen universities. The two have sizzling chemistry together, with valedictorian Molly being the headstrong driven leader whilst Dever’s Amy is restrained and eager to stay in the shadows. It’s a pair of star-making performances that really reign in the insanity the plot takes the duo through, and it couldn’t feel in safer hands.

And boy does it go some weird places. Yes, Booksmart is a raunchy teenage-fueled comedy packed with sex jokes and farce, but it also manages to work as a coming-of-age tale on the same level thanks to its focus on the duo’s friendship. Both Molly and Amy have different goals throughout the night, and whilst the setup is simple (make moves on their dream dates whilst they try to cram four years of partying into one night), they’re relatable and don’t get in the way of the script or characters. Speaking of which, every character feels utilised. Whether it’s for a recurring gag or emotional payoff, every character with a piece of dialogue gets their own moment to shine without the attention ever straying too far away from Molly and Amy. It’s no mean feat that Olivia Wilde avoids getting worked-up in the insanity of it all, especially towards the final act as every character overlaps each other within the climactic house party.

Lisa Kudrow and Will Forte make the most of their limited screen time as Amy’s somewhat-accepting Christian parents masking their discomfort at their daughter’s homosexuality. Skyler Gisondo’s Jared gets a punchy emotional arc whilst still retaining a host of laughs and Billie Lourd’s Gigi bounces from scene to scene chewing up scenery in one of the most love it/hate it recurring gags I’ve seen in quite some time. Every classmate feels fleshed out, even when succumbing to some admittedly generic student dialogue at times. However, amongst this barrage of new talent, Jason Sudiekis’ small role feels like it’s been ripped out of a different film at points. Playing the financially-troubled principal, he often feels like an intrusion that’s strayed too far from a noughties comedy whose been kept for the actor’s starpower. 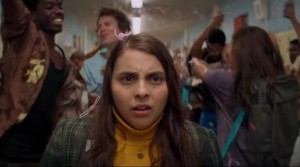 With four(!) credited writers (Emily Halpern, Sarah Haskins, Susanna Fogel and Katie Silberman) it’s surprising the tonal shifts don’t feel more jarring as the girls’ night goes on. There’s a definite formulaic presentation as the two go from location to location after wringing the latest set-piece dry, but it’s hard to argue with it when the set-pieces themself work. Even when they don’t, it’s not long before we’re moved right along to the next one. From an empty desperate cruise-ship celebration to a poorly-executed murder mystery party, you can’t fault the film for variety.  One in particular involving the girls getting high for the first time and hallucinating themselves as stop-motion Barbie-like dolls is the kind of thing that makes Booksmart stand out from the typical college film. What could have been a gratuitous display of stop-motion for the use of a cliche tripping sequence (something like Harold & Kumar) instead becomes just one of the charming showcases of the lead’s talents. And whilst it stretches believability at times, these decisions are made purely to keep the pacing brisk and exciting. 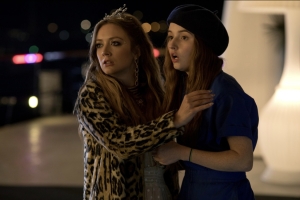 Not content with simply being a well-rounded, hilarious comedy, Olivia Wilde clearly has a ball experimenting with some pent-up directorial flare behind the camera. Aided by Jason McCormick’s crisp cinematography, the visuals never steer too far from the tone of the film, yet are distinctive enough to provide added nourishment. Wilde flourishes with the wide lenses and pans like she’s been preparing this her whole life throughout the first two acts of the film, but it’s during the final third when the duo finally make it to their house-party destination that she imbues her direction with a delicately-placed layer of poignant authenticity. Amy’s emotional struggle overshadows Molly’s for this section of the film, as she’s placed face-to-face with Ryan (her crush) and the scene becomes dreamlike underwater sequences as the party moves into the swimming pool. Combined with Dan the Automator’s soundtrack, this brief lull in the pacing offers sombre reflection and deeper emotional beats than I was expecting from Booksmart. It’s a film that sticks the landing too, with the following sequence honing in on Dever’s performance in a continuous shot that stretches the nuances of both her and Feldstein’s characters in a way that brings them in a complete circle. Whilst I’d argue their relationship feels a little hastily-explained within the start of the film, it allows the second half to really nurture and convey what the filmmakers have done here. It’s above and beyond the average teenage story. 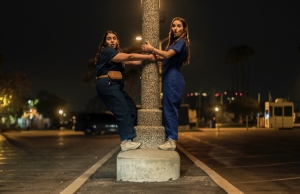 There are times when Booksmart succumbs to the small caveats of typical storytelling fodder, but it’s those moments that make the more unique ones feel so special. Olivia Wilde has managed to bring John Hughes’ sensibilities into the modern landscape by making them entirely her own whilst including all the imperfections and insecurities of modern-day life. They’ve just also managed to make it ridiculously funny too, and that’s always a plus.