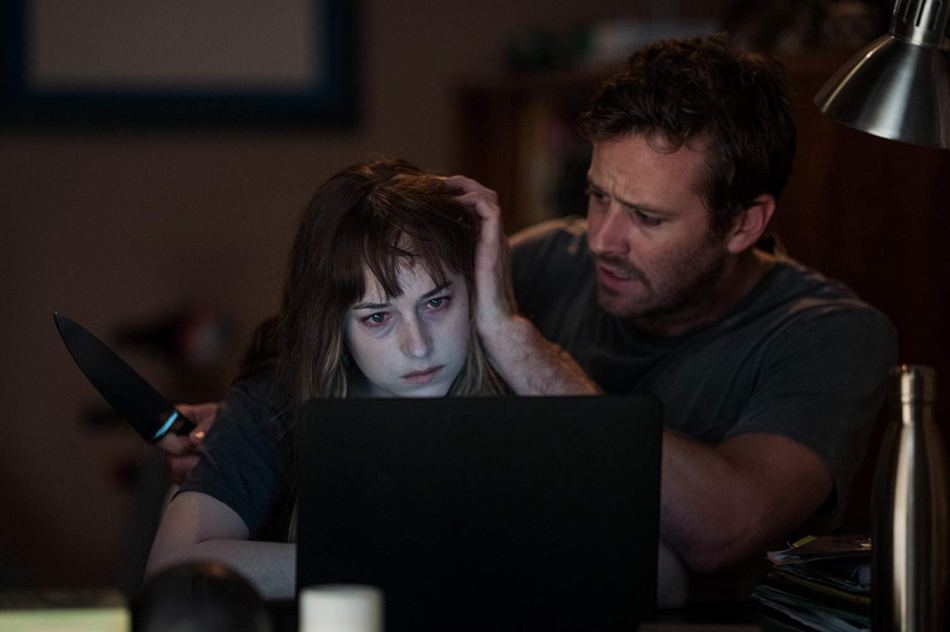 If ever there was a digital-age successor to the totally dumb delight of Tommy Wiseau‘s 2003 cult classic The Room, it would probably look a lot like Babak Anvari‘s Wounds. The British-Iranian director’s sophomore effort after his critically-acclaimed debut Under the Shadow, Wounds is the type of film that instantly announces how ridiculous it will be, boldly opening with a Heart of Darkness quote before transitioning into an unbelievably outlandish first scene. A modern jumble of other horror features from the past two decades- The Ring, Sinister, and Unfriended come easiest to mind- the film is apparently a cautionary tale about…a haunted cell phone. Introducing the screening this critic attended, Anvari hesitantly but simply stated that his intentions for the film were “to create something different”.

While there are a great many things to be said about Wounds, almost all universally bad, I can’t help but feel that it perhaps is different in its own accidentally ironic way. Past The Room, it is indeed difficult to recall a more recent film whose genuine artistic intentions wound up so bizarrely incongruous to the embarrassing final product. It’s a miracle largely indebted to Netflix’s agnostic attitude towards quality that Wounds will even see the light of day, because there surely aren’t many other examples of dreadful D-movies with A-list casts that are as hysterically delightful.

The aforementioned beginning is almost too strange to describe. The film opens in a bar at night, where its erratic, alcoholic bartender Will (played by a painfully serious Armie Hammer) is serving drinks to his friends and a group of conspicuously underage students. Before anything supernatural has even occurred, we’re met with a terrible sequence of overly-scripted dialogue, rich with casual sexual harassment and alcoholic encouragement alike, timed to editing that would make even the staunchest of Bohemian Rhapsody defenders wince. The scene only becomes more peculiar when a stranger slices a gaping hole in a regular customer’s face with a bottle shard after the latter spills his drink on him. The shocking instance of violence isn’t even the narrative beat of the scene though, which belongs to the mysterious cell phone left in the bar by one of the acne-speckled teenagers Will inexplicably allowed to drink there. Hammer’s character takes the phone home and toys with it, somehow able to correctly guess its lock pattern by observing the finger marks left on the glass. Only then does Wounds begin to feel like it’s even trying to be a horror film, as Will finds himself in the middle of a group chat séance.

To Anvari’s credit, it is truly difficult to make a film like this, so unequivocally and unintentionally terrible that, in my mind at least, defies any traditional conceptions of quality or criticism. Yes, this is surely 2019’s one and only “so bad it’s good” movie, and any attempt to take it seriously will prove a most fruitless endeavor. One must wonder if either Armie Hammer or Dakota Johnson, who plays the former’s cold and paper-thin girlfriend Carrie, realized what they were getting into. Did they really think this was going to be a chilling horror satire on the perils of summoning a group chat demon?

In any case, both play their roles with the utmost sincerity, lacking a single shred of irony even while delivering some of the most absurd dialogue I’ve heard in years. Hammer is especially marvelous in his caricature of a character, a completely one-dimensional frat-bro of a bartender whose only driving motivations are blackout intoxication and sexual conquest. He plays Will with almost the same level of uncomfortable intensity he exuded in Sorry to Bother You, more uncanny here despite a slight reduction in psychotic volume. On the contrast, Dakota Johnson is severely underutilized, appearing in but a handful of scenes that were ostensibly only conceived to accuse her partner of infidelity and stare at an unexplained video of a creepy tunnel. Her performance is somewhat of a return to her Fifty Shades days (dashed with a hint of The Room‘s Lisa) but she still gets a surprising amount of unforeseen comic mileage for the screen time she does receive.

I certainly can’t claim to have seen a worse film at Cannes this year than Wounds. On a filmmaking level, it’s an indisputable trainwreck of a film in every sense of the word, more nonsensical than even the dumbest of the Internet creepypastas it pulls from, and totally devoid of both basic function and meaning. Even so, I couldn’t help but laugh along (sometimes almost to the point of tears) to its ridiculous tune of CGI cockroaches, group chat messages of severed heads, and chairs being violently pulled back (on at least two occasions) with the unwarranted noise and ferocity of a tornado.

Perhaps I am giving Wounds too much credit. Maybe it is just a poorly-conceived horror flick Netflix indifferently distributed- there are far too many other wastes of time buried within the site’s bowels for such a notion to lack merit. Yet something about its brazen awfulness, its constant barrage of cringe-worthy dialogue and unintelligible nonsense of a plot, gave me a strange but genuine pleasure watching it. I’m doubtful that Wounds will ever achieve the legendary cult status of something like The Room (what can, after all?) but I wholeheartedly recommend it the next time you require something in the same stratosphere as Tommy Wiseau or bad M. Night Shyamalan. If nothing else, it gives the world the always welcome gift of a deranged Armie Hammer performance, and for that we must be thankful.