Traveling abroad can be scary. Especially for Americans – who for a variety of reasons enjoy (suffer from?) significant cultural isolation – visiting another country bears with it many understandable anxieties. While there certainly exist many Americans that dutifully follow international news, it’s not a stretch to imagine that the majority of the country remains blissfully unaware of the broader happenings of the world. This ignorance often manifests itself in childish stereotypes about different countries and their inhabitants, which unfortunately still wield a disappointing degree of influence in America. You’ve likely heard some of them before: the French are rude, eat frogs, and are only skilled at surrendering. The Canadians are overly polite and say “eh” after everything. The Germans? They’re still Nazis.

As ludicrous as these stereotypes are, they nevertheless persist at least somewhat in the collective American subconsciousness. Even in the 21st century, the United States remains one of the most xenophobic countries in the world – a fact one needn’t look further than the White House to discern. Of course, any American that has traveled abroad can likely attest to the patent inaccuracy of these crude understandings. Although there will always be cultural differences between opposite corners of the globe, people are more or less the same wherever one chooses to go.

Eli Roth‘s controversial 2006 hit Hostel channels and deconstructs this arrogant American obtusity towards the world through surreal satire and bloody horror alike. The gore-packed slasher, which came out right in the wake of Saw and consequently birthed the term “torture porn”, opens with a premise that just as easily could have been spun as a raunchy studio comedy. Frat-bro douchebags Paxton (Jay Hernandez) and Josh (Derek Richardson) embark on a backpacking pilgrimage across Europe with their Icelandic friend Óli (Eyþór Guðjónsson) to do drugs and get laid. While splurging in an Amsterdam brothel, they are convinced by a Dutch drug dealer to visit a remote hostel in Slovakia, where he promises beautiful women that love Americans.

Upon arriving, the three are greeted by gorgeous women who sleep with them almost immediately. Europe becomes exactly how they imagined it to be – a playground of easy sex and drugs catered entirely to their crude appetites. It’s almost too good to be true, and indeed it doesn’t take long for people to start mysteriously disappearing, never to be seen again. It’s eventually revealed that the titular hostel is a literal tourist trap, engineered to lure and auction off hedonistic individuals like Paxton and Josh to the rich to torture and kill for sport (a variation on Richard Connell‘s iconic short story “The Most Dangerous Game”). 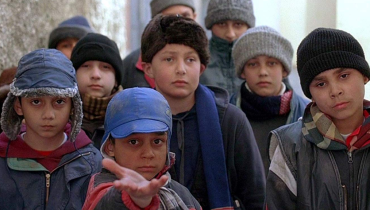 Among the numerous complaints lodged against the film upon its release, perhaps the most significant came from the Slovokian government, who were understandably offended by the film’s portrayal of their country and feared it would deter tourism. They weren’t wrong to be angry with the film’s depiction of their country – the Slovakia of Hostel is one of muddy streets, dilapidated factories, vagrant child gangs, and general anarchy. And yet, it’s this blatantly xenophobic “portrayal” of Slovakia (and Europe in general) that makes the film so surprisingly thoughtful as a lampoon of global American ignorance. Even before Paxton and Josh arrive in Slovakia, the Europe they find themselves in is a fantasyland rendered almost completely from lazy stereotypes, one where the German language is bizarrely ubiquitous (even in the Netherlands, which as one angry Dutch Letterboxd user points out, has never been spoken there), drugs and prostitutes are abound, and Americans are treated as first-class citizens.

Roth presents all of this so earnestly and obnoxiously, with that unmistakable early-2000s low-budget sleaziness, that the film’s first half almost borders on the surreal. All of its characters are hollow, cardboard cut-outs (the kind of people who would likely find unironic delight in watching a gore-fest like this), and the one character that bears even the closest resemblance to a real personality (Josh) is shockingly one of the first to be killed. It’s not too much of a leap for the film to abruptly pivot its hedonistic fantasyland into a nightmare, and its last thirty minutes are both unflinchingly gruesome and genuinely unnerving. There’s an ironic table-turning that occurs on Josh and Paxton, as the two become victims to the same reckless pleasure-seeking (albeit to a more extreme end) that they were seeking in the first place. 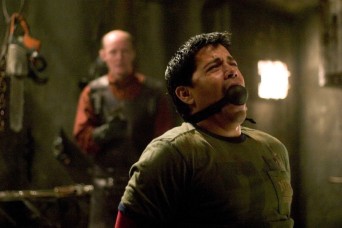 Places like this probably do exist on Earth – Roth allegedly came up with the idea from a disturbing “murder vacation” website he stumbled across online – but it’s not the realism of the situation that’s frightening (which is so obviously tossed out in the film’s first moments). What makes the film work so surprisingly well is the way it twists its drab, generic Eastern-bloc aesthetic into a feverish American nightmare. It all boils down to the collective fear most Americans probably feel at some point while traveling abroad: underneath the locals’ welcoming smiles, the rest of the world actually despises them. The fact that Hostel was made and released shortly after the US’s widely denounced 2003 invasion of Iraq only imbues the concern with a stronger urgency.

For some reason, I actually feel somewhat of a connection to these categorically American anxieties, however nonsensical and misplaced I understand them to be. I’d like to think that in the handful of times I’ve been to Europe, I’ve never acted with even an ounce of the arrogance that the two Americans in Hostel display (and I’m also not terribly concerned about being abducted and murdered). What I am afraid of is being associated with those ugliest, most imperious aspects of the US that understandably sour the reputation of its citizens to the rest of the world. The first time I went to Cannes, I remember being mildly scolded by a middle-aged French man for saying I was from “America” and not “the United States”. To me, that was just how I commonly referred to my country, but to him it indicated a “global arrogance” (his words) on my part. As innocuous as the encounter may sound, it’s stayed on my mind ever since, and made me even more self-conscious about how I present myself abroad.

Hostel is not be the epitome of horror cinema, and I realize I may be giving it too much credit because of my own personal anxieties about traveling in another country. What continues to fascinate me, though, is the way it simultaneously validates and condemns how Americans look at the outside world – confirming and then ridiculing our most irrational fears about foreign “others” by following that baseless mistrust to its most absurdly bloody of conclusions. It might not dissect the root causes or greater implications of global American entitlement – it is still a slasher about stupid tourists being tortured for sport – but it certainly holds a terrifying mirror to it. And what does horror do better, after all, than hold a mirror to our most repressed weaknesses and anxieties?