In recent years, the previously maligned prequel to the Twin Peaks series has received a much deserved period of critical re-evaluation. Twin Peaks: Fire Walk With Me is a complex and compelling genre shift from soap-satire-mystery to all-out psychological horror; released in 1992, the film has had a contentious history amongst fans and critics alike. Initially, before 2017’s The Return, the film would never go on to answer questions or provide any kind of closure to the series’ original run. It would however, allow David Lynch and Mark Frost to focus on one of the key elements of the original show. That key element, namely, is the character Laura Palmer, the murdered teenager, homecoming queen, a promiscuous, troubled and eventual feminist icon. 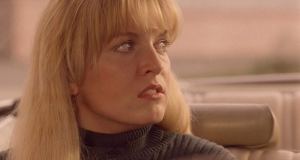 Laura Palmer, played by Sheryl Lee, is arguably Lynch’s most developed character in the Twin Peaks universe, with the prequel Fire Walk With Me focusing on her last days of life. Laura is both the antagonist and the heroine of the film, with Laura’s duality a metaphor for the entire Twin Peaks mythology; innocent, pure, feminine, powerful, mysterious, abused, manipulating, and damaged- all at once. Initially, Sheryl Lee was cast to simply play the plastic-wrapped corpse of Laura Palmer, but Lynch and Frost saw potential in her beyond that minimal role, with the changing nature of the show and its writing thankfully allowing her to remain a seminal figure in life and death. Perhaps if the film had not suffered both commercially and critically, Lee may have received nominations and awards for her powerful display in Fire Walk With Me. Through the vehicle of the psychological horror genre, a rich and powerful origin story exists for Laura Palmer that would go on to dictate the past and the future of Twin Peaks.

As feminist film theory has gone on to discuss, Fire Walk With Me addresses several issues around gender, sexuality and a misogyny stirring in the underbelly of small town America. The very nature of the plot revolving around the murder of a teenage girl speaks volumes. The guise of quaint small town America hides these bubbling undercurrents well at first glance, but much like Laura Palmer, there are hidden layers and complex statements made by Lynch on a society obsessed with sex and power. Leland Palmer (Ray Wise) also represents a multifaceted statement on gender roles, with his position established as a well-liked community figure and father hiding a deep intangible corruption within himself, the somewhat meta-entity BOB. In Fire Walk With Me are deeply rooted examinations of patriarchal evils, through Leland’s bipolar fatherhood and BOB’s unflinching determination to possess Laura. Laura remains the beginning and end of the story. Though several different negative associations exist within the character of Laura, a troubled teenager who is in essence a part-time call girl and frequent drug-user, it becomes apparent that these elements of her character exist to combat a life of detrimental subjugation she cannot escape. Though we may never fully understand or know many of Laura’s secrets (“She’s filled with secrets”), we see the trauma that leads to the misbehaviour and desperation of a figure too pure for the world she inhabits.

The horror tropes of demons, possession, violence and murder are accompanied by a more metaphorical horror, one that audiences may not have been and still may not be able to come to terms with: the crisis of masculinity that existed in America post-Vietnam. Laura is a victim of sexual and physical abuse, as well as incestuous rape. Lynch has often faced criticisms on his portrayal of female characters in his work, previously criticised for allowing little agency to these characters, who are often the subject of dark and brutal acts by male counterparts. Though this criticism is not necessarily unfounded, Lynch uses the female identity as a metaphor for a purer and more ambiguous form of righteousness and good in the universe, which he dismantles powerfully to expose a darker Americana. Consequently, Lynch also examines male vulnerability exhibited in the pursuit of power. Male characters in Fire Walk With Me all are in positions of great power and evil, whilst the female characters are submissive and in stereotypically inferior careers or financial status, exemplifying institutionalized inequalities of Western society.

It is through the vessel of Laura Palmer we see a constructed narrative of life and death in Fire Walk With Me. Through Laura we see the sanctity of womanhood tarnished by varied consequences of fragile masculinity running through Twin Peaks. The film’s plot mostly focuses on Laura’s last week of life, with her tumultuous relationship with Bobby Briggs (Dana Ashbrook) dragged through cocaine and murder in the woods, whilst simultaneously her naive love affair with James Hurley (James Marshall) would end hours before her murder. Laura’s life however became a selfless ode to those closest to her as she accepts her fate is impossible to overcome. Suffering sexual abuse and rape at the hands of the demon BOB who has possessed her father Leland, she uses love, prostitution and drugs to numb the naked pain and sexual immolation she is subjected to throughout the film.. Though finally, Laura would discover that BOB is actually her father, Leland follows her to a cabin in the woods. The train car murder that follows sees Laura in the throes of death slip on the symbolic owl ring that Mike, the one armed man, tosses in the car. The ring allows her to ultimately elude BOB/Leland in life and help stop him in death, aiding future hero Dale Cooper from the sofa in the symbolic Waiting Room. Lynch ensures this is portrayed in the chilling tones he could never fully utilise within the original series; the result is a tragic and harrowing journey for a young high school girl entering and exiting adulthood, fast.

As it stands today, Fire Walk With Me is now considered vital canon to the Twin Peaks universe and essential viewing for fans of David Lynch. It is also a chilling horror film addressing the dark underbelly of small town America, whilst also emerging as a strong feminist horror film that challenges audiences through surreal symbolism and unwavering darkness.

0 comments on “Between Two Worlds: Laura Palmer and Feminism in Twin Peaks Fire Walk With Me”