Published in 1868, Louisa May Alcott’s Little Women tells the story of four sisters and their family during and after the Civil War. It has left an indelible mark on both literature and film with a litany of film and television adaptations over the years. Many directors have taken a crack at telling Alcott’s story from George Cukor to Mervyn LeRoy to Gillian Armstrong. Now, it is Greta Gerwig‘s turn. Following up her original and personal Lady Bird with an adaptation of Alcott’s work is a perfect transition that yields great results. Little Women, as in the source, follows the events in the lives of the March family – Jo (Saoirse Ronan), Meg (Emma Watson), Amy (Florence Pugh), Beth (Eliza Scanlen), Marmee (Laura Dern), and Father (Bob Odenkirk) – as well as their interactions with the nearby (and wealthy) Laurence family, led by Theodore “Laurie” Laurence (Timothée Chalamet) and his grandfather (Chris Cooper). Funny, moving, and wonderfully directed, Little Women is another triumph from Gerwig in her young directing career.

Lady Bird stood out in how it examined the world around its titular character. Her relationship with her mother being central to that, as well as her friendships at school and romantic entanglements. Little Women is much of the same, but rather than a single character, it follows the whole family. The results are not diminished at all with Gerwig’s empathetic and understanding approach to character yielding great results. The flaws of all of the women are on display alongside their strengths. Yet, no matter how much they drive one another crazy, they are always there together. Whether it is for Christmas to laugh and celebrate or at a funeral where their faces flood with tears, the March family is there for one another.

The flaws of each individual manifests in flaws in their relationships with one another, but their togetherness is never shattered. Jo can go from being incessantly mad at Amy to sitting up all night by her bedside, while their competing (or vastly different) dreams may threaten to create schisms between them. They are a family above all else and no matter how long they are apart, they will be together again. It is no mistake, then, that Little Women is at its most joyous when all of the family is together. A scene of Laurie simply standing there and basking in the loud chaos of the March home typify this with he and many others from around town drawn into the aura of  the March girls. Whether in the past or present, the warmth and joy presented on screen is infectious with off-hand remarks and inside jokes resonating so well thanks to the cultivation of these familial bonds throughout Little Women. 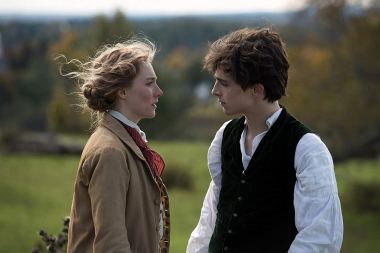 Gerwig’s presentation of the film in two parts – past and present – that run parallel to one another is often crucial in generating some of its emotions but, above all, it captures the ‘family-over-the-years’ theme to which Little Women strives. Some well-timed cuts by Gerwig and editor Nick Houy do well in creating a funny moment with Amy confessing her love to Laurie and then flashing back to her making a mould of her feet as a gift for him years prior. A scene in the past of Jo waking up to find the sick Beth in the kitchen is countered by the crushing blow of waking up in the same situation to find Marmee sitting there, choking back tears. Little Women in this balance, showing those transitions or similarities over the years that define the March sisters and their lives. It serves to build out their characters and those tragic normalities – such as always trying to nurse Beth back to health – that so often come to become synonymous with a family’s outlook. To Gerwig’s credit, Little Women never buckles under the weight of two storylines in different eras, always distinctly presenting them without need for obvious cues to what years the action is now occurring. It is a credit that it can be understood that easily, while Gerwig’s thematic presentation of both timelines allows them to easily flow with one another.

Gerwig and DP Yorick Le Saux do a great job differentiating these two portions as well with distinct hues and feelings created by the camera. The past is often warm with soft browns and reds welcoming the audience into this tight-knit family. Often set at Christmas or in idyllic snow trips, this world is appropriately welcoming and tight-knit considering the family focus of the portion. It is where the girls spend their formative years, dreaming about the time to come and building the foundation of the bonds they will have. The other portion of the film, the present, is often different. Whites and blues dominate. One can see the scene where Laurie pours his heart out to Jo in the past and then Amy in the present as direct contrasts. From an open field with beautiful fall foliage in the distance to a cold, yet extravagant building in the present, the color palette of these similarly themed moments are distinct from one another. Of course, it is not because the present is any less tight-knit or connected. Rather, it is perhaps even more so as the years have brought them together even more, if not physically then in spirit. But, it is that distance that influences these moments. There are scenes of them together that are shot with that same warmth, namely the dinner with Friedrich (Louis Garrel). However, so often, they are all over the place and far from one another. They are left to fend for themselves, either turning their dreams into reality or finding something else.

Throughout, the acting is exemplary. Saoirse Ronan delivers another stellar performance as the complex Jo. So aspirational and yet longing for many of the “women’s roles” she disregarded as not for her, Ronan captures both the independence and the longing for love that make up Jo. Her growth into accepting that she can be both herself and married is a hard earned one, but something that Ronan shows with grace and considerable emotion. Florence Pugh is the other standout here, a terrifically nuanced approach to Amy, who is a bit abrasive at times but has a good heart that Pugh takes care to evoke. The connection between Jo and Amy is a tenuous one, something that Ronan and Pugh capture quite well when they fight but their bond together – as shown in more tender moments – is so genuine, it leaves a lasting impact. In a smaller role, Chris Cooper’s broken hearted Mr. Laurence is quite impressive. Cooper is given some quiet, expressive moments to really showcase the role and nails it, especially in one particularly moving scene where he stops to listen to Beth play piano. Cooper’s every movement and action is so packed with emotion. His performance is incredible, one of the standouts in Little Women.

It can be challenging to adapt a novel so well-known and frequently adapted as Little Women, balancing audience expectations with breaking it into new terrain. Greta Gerwig does exactly that, but makes it look easy to do. Delivering a funny, moving, and thought-provoking look at identity, sisterhood, and daughter-mother relationships, Little Women is a deeply Gerwig take on the subject matter and it benefits considerably from this touch. The film’s strong cinematography and great performances from Saoirse Ronan, Florence Pugh, and Chris Cooper – as well as the whole cast – further bolster the heart at the center of Little Women. This film is sure to go down as both one of the best of 2019 and one of the finest adaptations of Louisa May Alcott’s novel, daring to interpret it as only Gerwig can and remain faithful to its rich source material.