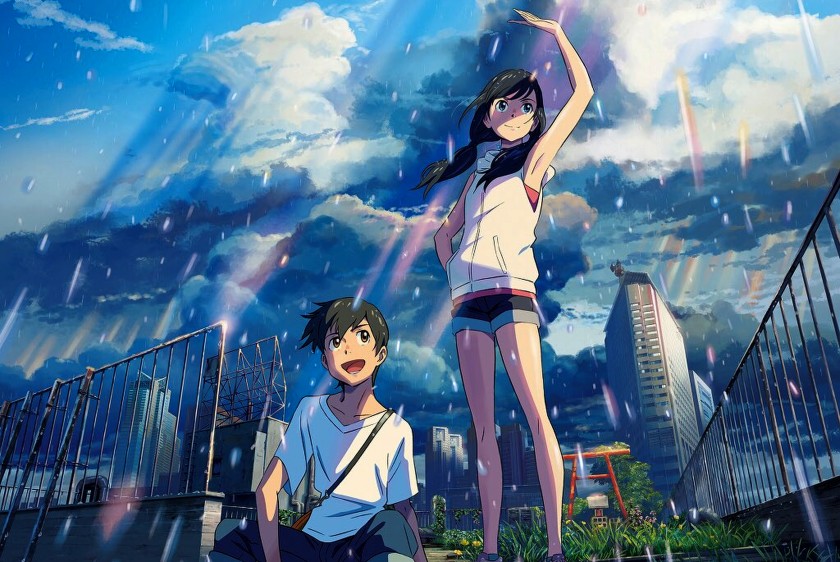 Makoto Shinkai, director of the smash hit Your Name, returns with another movie that portrays natural phenomena with a supernatural bent and a budding, sweet, teen romance at its center. Weathering with You follows teen runaway Hodoka (Kotaro Daigo, Brandon Engman) as he struggles to survive in Tokyo, which has been subject to constant rain for quite a while. He eventually finds refuge with Suga Keisuke (Shun Oguri, Lee Pace) and Natsumi (Tsubasa Honda, Alison Brie) who both write tabloid stories for a living. He eventually meets Hina (Nana Mori, Ashley Boettcher) who has the ability to make the sun appear for short periods of time. Their relationship, which is at first somewhat professional, revolves around solving the mystery of her powers and the consequences of their use.

The world-building in Weathering with You is even more extensive than in Your Name. Shinkai is perhaps one of the best animators of water in all its forms. The ocean wave that nearly sweeps away Hodoka on the ferry to Tokyo is impressive and terrifying. As for the rain, which is notoriously difficult to draw and animate, Shinkai already mastered that in The Garden of Words, and rain in all of its forms becomes another character, influencing the actions of the different characters and transforming Tokyo into an almost unrecognizable world.

When it comes to character design and characterization, Shinkai is a bit less accomplished. His characters tend to fit within generic anime visual archetypes and behaviors. He is no Miyazaki, whose characters are instantly recognizable to even non-Japanese children everywhere. He uses other methods to flesh out his characters such as the music of rock band Radwimps, which is far more ubiquitous in Weathering with You than it was in Your Name. Shinkai would actually send unfinished scenes to Radwimps, and they would come up with songs which Shinkai and his team would use to further develop the scenes. The effect makes this movie seem even more impressionistic and kinetic, though it also comes at the cost of the momentum of the story.

Hodoka and Hina are also not quite the characters that Mitsuha and Taki from Your Name were. (The two protagonists of Your Name make some surprising cameos in Weathering with You.) In addition to unraveling the mystery at its core, Your Name was fun because we saw two characters get to know each other in ways that they never expected and how their eventual love came from a real, emotional place. In Weathering with You, the two characters remain strangely oblique. Hina does not stray far from the manic pixie dream girl stereotype, although we do eventually learn about the trauma that informs some of her decisions. Also Hodoka, who is ostensibly the main character, is not much of a character outside of what happens to him. He is far more reactive than he is active even though he is the one who chose to run away from home. He is very recognizably a teenager who doesn’t think much beyond his immediate experiences, and it’s possible that some may find some of his actions- especially later in the movie- as alarmingly reckless and selfish.

Despite being more than twenty years into his brilliant career, Shinkai still manages to capture the ebullient feelings of youth that can cross cultural barriers. Even jaded adults can respond to the beating, sensitive heart at the core of his movies while also realizing that the actions of his often youthful protagonists are not meant to be seen as calm, rational acts of logic. Rather, Shinkai is more concerned with capturing the fire of youth in a new, often breathtaking, manner and even with its flaws, Weathering with You does this brilliantly.