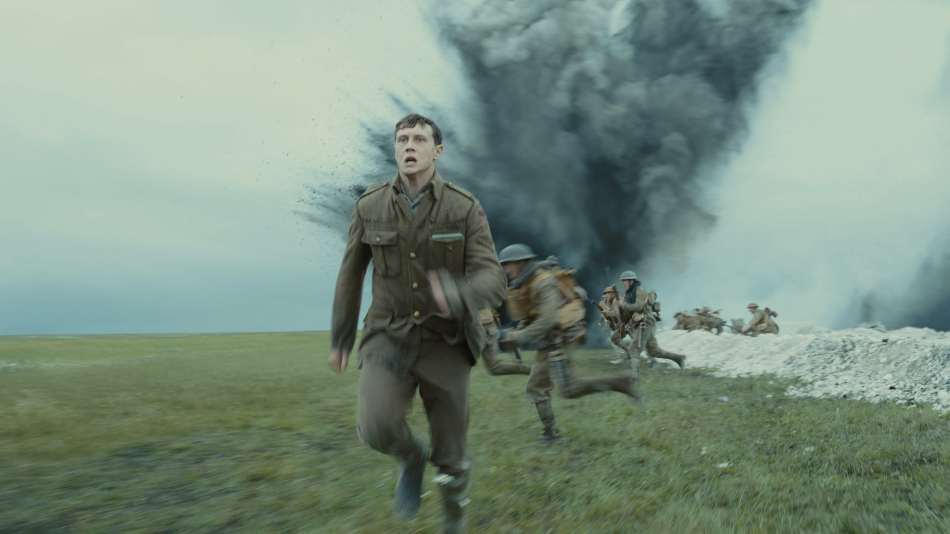 The long take is nothing new, and neither is the “one shot film”. Alfred Hitchcock edited his masterful 1948 thriller Rope to appear as one continuous shot, splicing together takes of roughly ten minutes to turn his film into something of a cinematic stage play. Just five years ago, Alejandro G. Iñárritu’s Birdman – an artsy black comedy-drama about a washed up movie star, also cut to appear as one continuous take – took home Best Picture at the 87th Academy Awards. Even television has been experimenting with long takes – both episode 5 of Mr. Robot‘s third season and episode 6 of The Haunting of Hill House are edited to appear as a single unbroken take. 1917, the new WWI thriller by Sam Mendes, is perhaps the biggest, most ambitious entry in this canon of quasi-single-take films, following the dire mission of two British soldiers as they navigate war-torn France. Shot by Roger Deakins – undoubtedly one of the greatest cinematographers alive today – it’s impossible to deny the stunning visual prowess running through every minute of 1917. Even so, the film lives and dies by its insistence on the long take as its only avenue of presentation, oscillating over the course of its 119-minute runtime between an immersive cinematic achievement and a hollow, gimmicky thrill ride. 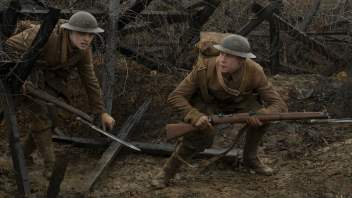 We enter the film on two British soldiers – Lance Corporals Will Schofield (George MacKay) and Tom Blake (Dean-Charles Chapman). The two men are given urgent orders – they must travel behind the enemy lines to warn a nearby unit of a German trap. The stakes are high: if they don’t warn them before dawn, over 1,600 men will likely perish. From there, the film sets off, following the men as they make their treacherous way across no man’s land. The camera never strays far from them, only occasionally leaving their point of view to show off impressive bits of production design or the devastating carnage surrounding them.

1917 was conceived, shot, and edited to appear as one continuous take (well, two actually, if you count a black-out one of its characters has about halfway through). This bold tactic plays well at least part of the time, especially during moments of great intensity or peril (such is the case with the film’s climax, which follows a character as he leaps up from the trenches and sprints across no man’s land, dodging artillery fire, bullets, and friendly soldiers alike). The choice also functions quite nicely in quieter scenes as well – a particularly memorable nighttime town sequence and a hushed rendition of “Danny Boy” are probably the film’s two best moments.

The ostensible goal of making a “one shot film” such as this is to immerse the audience in the grim reality of war and convey the life-or-death urgency of every second. This works exceptionally well in concentrated bursts, but it’s an unreliable glue to use between every one of the film’s setpieces. At a glance, it makes sense that withholding a filmmaking trick such as editing (which is so often used to distort time) would enable an audience to feel more immersed in the action. The problem is that we ourselves don’t always perceive time as one unbroken take – most people go about their days drifting in and out of “the moment”. In fact, the fractured quality of a more traditionally edited film actually mirrors the natural immersion of our lives much better. This realization becomes painfully apparent while watching 1917, which evokes an uncanny feeling of artifice through the unnatural sensation of watching every single second transpire in real time.

Another issue with the film’s single take stunt is that it so often feels like just that: a stunt. Roger Deakins is indisputably a talented cinematographer, and there’s not a minute that goes by in 1917 that one isn’t aware of that. Every pan of the camera, every tracking shot, every single bit of chaos within the film feels artificially planned and rehearsed – not a desirable characteristic for a film about the unpredictability of death and destruction. It may sound like an absurd critique, but the film is simply too polished and precise to be a convincing portrait of war. The carefully detailed production design feels closer to the decorations of a WWI-themed rollercoaster than a real world filled with real people. Many have compared the structure and aesthetics of 1917 to a video game, and the comparison is unfortunately at times quite apt.

While it’s certainly an impressive visual achievement, 1917 unfortunately doesn’t have the makings of an instant classic or even a film with much of a shelf life past awards season. Stretching a long take to feature length simply isn’t enough to make this a great film, and its tired war script of hesitant heroism is plenty proof of that. Complex long takes are becoming increasingly overused to grab the attention of even the most casual of moviegoers, but as they rise in frequency they lose much of their magic and memorability. The “long take films” I remember most vividly are the ones that use them either sparingly or with a clear artistic purpose (Goodfellas, Children of Men, Long Day’s Journey Into Night), not the ones that use them for their own sake. I wish I could rally behind 1917 as the breathtaking cinematic achievement that so many seem to see it as, but its shyness towards greater meaning in favor of a flawless presentation left me lukewarm at best and frustrated at worst.