Lawrence Michael Levine’s third directorial feature, which had its premiere at this year’s Sundance Film Festival, is a hard film to write about. Black Bear, whose official description on the festival’s website describes it as a tale of deception and mind games between a couple and their houseguest, is merely a surface-level recounting. The film is wild, dreamlike, and original, and refuses to spoon-feed. This review will contain mild spoilers – almost impossible not to spoil a film like this when talking about it – but it is strongly recommended to go in blind. Black Bear is a pitch black take on feminism and manipulative artists that will leave a mark on viewers for days. 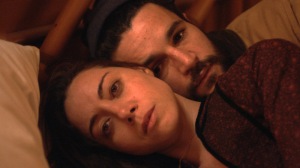 The film is divided into two very different, yet at the same time very similar parts, both involving the titular black bear. The first part follows Allison (Aubrey Plaza), an indie filmmaker whose stay at Gabe (Christopher Abbott) and Blair’s (Sarah Gadon) lakeside country lodge is intended to  cure the writer’s block that is delaying her next project. Gabe and Blair are expecting a child but have no plans on marrying – in fact, their relationship already seems on the hinges. Gabe makes no attempts at hiding his attraction towards Allison and Blair takes every opportunity she can to put him down. The bickering gives way to excellent moments of awkward comedy as the two put on their best host-faces in front of their guest. The guest in question plays along, often pushing arguments and intentionally siding with one or the other in to prolong the bickering well into the night.

The second part begins after the first ends abruptly; the actors and character’s names are the same, but their roles are different. Still at the country lodge, Allison is now an actress and wife to Gabe who is now directing a film that resembles the first part’s plot. This time, Blair is the character completing the love triangle as Gabe’s incessant flirting with her is his way of getting the perfect onscreen reactions from Allison. A small crew help Gabe bring the film to life while also taking care of Allison, whose immense jealousy drives her to drink heavily and respond in destructive ways.

Though the second half of Black Bear deals with making a film that resembles the plot of its first half, it differs enough to let the audience know that it isn’t a behind-the-scenes of sorts. Yes, similarities between the two parts abound, but it’s not a different perspective – at least not a literal one. Levine doesn’t include any indicators of why his film suddenly changes, leaving the audience to fend for themselves. What he manages is to craft a thought-provoking nightmare that can be construed as a critique on the unorthodox methods artists often use to hone their craft. Whether it be through manipulation or imagination, sometimes their perfectionism leaves them so concerned for the final product that their muses’ wellbeing are the least of their worries.

In the first half for example, Allison seems to play Gabe and Blair off of each other, almost for her own amusement. She recognizes this couple is unstable and is well aware that a few choice words could send them over the edge. In the second half, it is Gabe doing the manipulating as he takes drastic real-life measures to influence Allison’s performance for the camera. Both parts tend to focus on the fragility of ego, whether it be from a spouse or from an artist. It also raises questions of feminism and masculinity, cleverly observing and critiquing both.

Black Bear will leave audiences sitting in their seats deep in thought with scenes and moments that will stick with them for days. While they may need to process the plot(s), something they will recognize right off the bat is the performances. Since the three principle players are all playing dual roles, it gives them excellent opportunities to show off their versatility. Sarah Gadon’s melodramatic turn as the housewife in the first part playfully satirizes the conventional role. While it may overshadow her lesser part as the actress/“other woman” in the second half, she transitions into the role without missing a beat. Christopher Abbott, more or less an asshole in both parts, shines as the manipulative “genius” in the second part, showing absolutely no concern for his wife but is consumed with his project. Who really shines, though, is Aubrey Plaza. While these roles might be well suited for an actress of her abilities (always a perfect choice for a snarky, uninterested, sarcastic character), she goes beyond her strengths to churn out intense moments of harrowing emotion, vulnerability, and rage. It’s Aubrey Plaza at her most Aubrey Plaza and is a perfect chaotic match for such a chaotic film.

Though it may not be anything game-changing, Black Bear is certainly an inventive, original work that sets itself apart from other contemporary offerings. Its dreamlike surrealism and off-kilter energy are enough to keep an audience hooked while its performances are enough to keep the film remembered. If it gets buried under the countless other Sundance releases, it will be a shame but hopefully Black Bear lives on to reach cult-classic status.