Many of us dream of living happily in suburbia with a family. Gemma (Imogen Poots) and Tom (Jesse Eisenberg) are a couple looking to take the next step in their relationship and get a house together. They meet Martin (Johnathan Aris), an odd real estate agent who dresses like a door-to-door bible salesperson with a pristine short-sleeve white shirt and black trousers. He takes them to Yonder, a new housing complex with identical green-coloured homes, and an excessive amount of white fluffy clouds above them. Gemma and Tom immediately seem uneasy in the house and put off by Martin’s persona. Things turn more bizarre when Martin suddenly disappears, leaving the pair alone on the estate. They attempt to depart but instead find that they are unable to escape, and no matter how many times they drive around the development the pair arrive at the same house. After a while, Gemma and Tom are presented with a mysterious care package with a baby boy inside, as well as a message instructing them to raise the child. The infant soon becomes an irritating young boy who imitates Gemma and Tom and eerily resembles Martin. Tom continues to find a way out while Gemma grudgingly takes care of the boy. 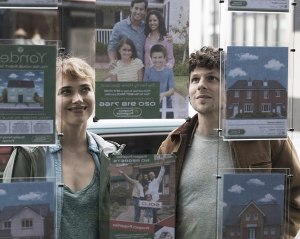 The first act of Vivarium is intriguing, and it slowly draws the audience into the peculiar situation Gemma and Tom finds themselves in. I dare say some parents didn’t plan on having a child when they did, but neither would they expect to have a child as exasperating as the one played by Senan Jennings, even if children do sometimes incense their parents. However, the events that unfold become tiresome to the audience. Not because of specific audiences relating to the subject matter, but more that there is little resolution given to what happens.

Poots’ performance keeps the film afloat. Her journey from being happy and hopeful about the future to a resenting adoptive mother showcases what ability she has. Eisenberg has given notable performances in the past, and though he gives a competent performance here, it isn’t one of his most memorable.

Director Lorcan Finnegan does capture the relationship struggles of living together and having a family well, and his depiction of a newly built British home with little character is fitting. Sadly there are a few bewildering offbeat events – especially in the closing moments – that overshadow the film.

Vivarium is not a comfortable watch for any audience regardless of where they are in life, but that is part of the film’s message: the perfect life does not exist. However, Vivarium is also confusing, and despite it being purposely ambiguous, it is debatable what the overall point of the film is. Vivarium is thought-provoking but its equivocal plot may leave some audiences confused altogether.