Jesus Shows You the Way to the Highway is an absurd cocktail of pop culture, history and unchecked lunacy, a truly bizarre lo-fi venture from Spanish director Miguel Llansó. His second feature is a sci-fi political satire that resonates from avant-garde filmmaking to experimental techno pessimism. Llansó has a background in philosophy, and Jesus Shows You the Way to the Highway builds on his debut 2015 feature Crumbs, a post-apocalyptic jaunt into ‘Afro-futurism’. Whilst some of the themes present in Crumbs feature here, his new film draws on visions of the past as much as it does the future. Unwilling to be languid in any shape or form, this may perhaps be the strangest film shown at Glasgow Film Festival 2020, in essence a trippy road movie cum wild spy thriller. 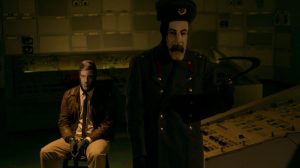 Drawing on influences such as The Matrix, eXistenZ and Inception, the plot blurs reality through the guise of technology and a computer-simulated world. Achieved with a much smaller budget than the aforementioned films, Llansó builds such a distinct world of double agents and political deception, drawing on other influences such as Batman, ironically used as a villain. Championing it’s 64-bit loading/title screens, 8-bit chiptune and awkward stop-motion adds layers to this low budget cyber punk mystery. Various uses of stock footage add a complimenting touch of the real world to what is anything but for its duration. There are visual similarities to David Lynch’s 2017 limited series Twin Peaks: The Return, with a purposeful humour in its cinematography, whilst the plot has elements of Lynch’s identity skewing nightmare Lost Highway.

Though it is objectively difficult to summarise this absurdist’s daydream, Jesus Shows You the Way to the Highway succeeds where other avant-garde/experimental films fail: it offers a semi-coherent narrative with funny characters exploring old tropes in new ways. The plot is as wildly absurd as it sounds; two CIA agents embark on a virtual mission to find and stop a virus in the computer world of Psychobook. The virus is personified by a shadowy figure wearing a simple Stalin mask. One of the two agents becomes a double agent, and the other slips into a coma, with his virtual self lost in a dystopian land known as Beta Ethiopia. To further add to these layers of impounding hilarity and confusion, Agent Gagano’s (Daniel Tadesse) virtual self must fight against Batfro (Solomon Tashe), a political villain in an Adam West-era Batman costume. Agent Palmer Eldritch (Augustín Mateo) becomes involved in more sinister bouts of inner turmoil, having a secret affair with Gagano’s Amazonian wife (Gerda-Annette Allikas) and selling an illegal drug known only as ‘The Substance’. This may sound a galling mass of ridiculous complexities- the film’s translation of the plot is just as demented but is a rewardingly sincere prodding at 70s Kung-fu, Cold War dramas, ironic pop culture history and exploitation films.

The exploration of its themes and plot is heavily littered with a brand of oddball & slapstick comedy that constantly flits between absurdism and surrealism. Shades of David Zucker and Peter Segal’s Naked Gun series are often visible, with the parody of international spying and their secret missions, and deceptions fundamental to the film. The comedic brand of Llansó’s brilliant oddity could also be likened to works of French directors like Bruno Dumont and Quentin Dupieux, where the nonsensical is rife. For all of its Afro-futurism and oddball cultural sprawl, the film has genuine charm and is starkly relevant in its testaments to working as a team and fighting corruption at the highest levels. Llansó’s eclectic socially-charged imagination offers a much welcomed fresh cinematic perspective on a changing landscape. Giving power and relevance to locations long neglected, Jesus Shows You the Way to the Highway is an unparalleled geopolitical journey into insanity.