Many couples in long-term relationships may discuss the possibility of starting a family, and it’s not a decision to be taken lightly. The demands of becoming a parent can mean sacrifices in personal freedom, and one may might fear that they are incapable of being a good parent. Yuval Hadadi‘s thought-provoking directorial debut 15 Years focuses on this subject matter within a gay relationship. 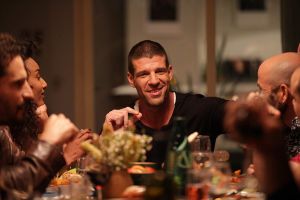 Yoav (Oded Leopold) has been with his boyfriend Dan (Udi Persi) for fifteen years. They seem content with their life together- both have decent careers and live in a pleasant modern apartment. When Yoav’s friend Alma (Ruti Asarsai) reveals that she is pregnant, it is evident children do not interest him, as he avoids the congratulating crowd and isn’t even impressed by Dan’s affections towards a little girl. Yoav shares his displeasure at a dinner party, which offends the guests (including Alma); when Dan discloses he might like to become a father, Yoav is further troubled. Yoav is aware that both he and Dan are getting older, but he is unwilling to give away his freedom that he feels a child would take from him, and questions his ability to be a good father. 15 Years displays well the strain parenthood can cause in a relationship when considered, especially when one is opposed to the idea, and the audience empathises with both characters.

Leopold’s performance as Yoav further engages the audience. He often seems restrained, but for a man who is in his early forties, Yoav lacks maturity and shows a reluctance to deal with serious conversations. It becomes telling when Dan meets Evyatar (Tamir Ginsburg), a man in his late twenties who seems to have a better understanding of how to tackle problems than Yoav. It is a perceptive insight into how age does not necessarily determine a person’s maturity.

Even though 15 Years takes place in Tel Aviv, the story does not feel exclusive to the city. That being said, there are some stunning shots of Tel Aviv, and what artistry the film exhibits is mostly through the use of light and shadow. Otherwise, the story is told modestly.

Despite one or two cliché moments and a lack of clarity in its final act, 15 Years is an intriguing drama that makes a statement with simplicity. Though it does not resolve the questions it poses, 15 Years seems to intend for its audience to discover the answers for themselves.