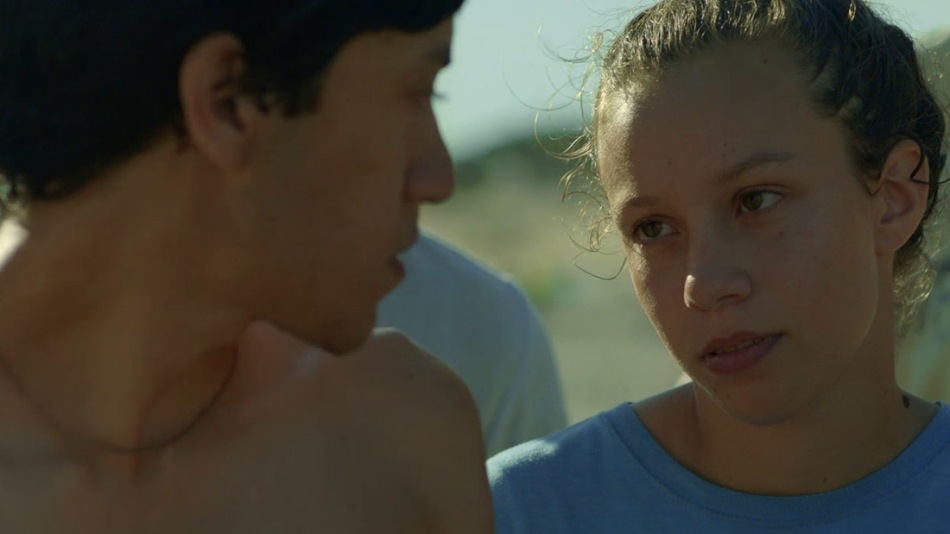 The Sharks, the assured directorial debut of Lucia Garibaldi, must be one of the most realistic coming of age films in recent memory. Most modern coming of age films seem to exclude the mundane and boring moments that accompany being a teenager. However, The Sharks includes them, fitting perfectly with the teenage angst, boredom and all of the other confusing feelings that are the essence of being a teenager, and it still does what every great coming of age film should do. It’s a gripping and intriguing tale of growing up, becoming more confident of who you are and want to be as the world changes around you.

The Sharks is two different stories, the first of a beach resort town haunted by the rumor of sharks and their response. The other is that of Rosina (newcomer Romina Bentancur), a 14 year old quiet loner, who works for her father’s gardening and lawn care company and alleges to have seen a shark. However, while working for her father on a job, she becomes interested and attracted to Joselo (Federico Morosini), but he seems more interested in his own pleasure, other women, and searching for a shark. Rosina quickly turns to jealousy and anger as she begins stalking, trapping, and toying with him. She starts concocting more elaborate schemes to gain his attention until the finale with one final revenge plot.

Romina Bentancur deserves a lot of praise for her great portrayal of the quiet, methodic, and slightly psychopathic Rosina. Her performance as a normal teen is exquisite, she is mature, knowledgeable about the world, and knows what she wants but she isn’t mature enough to gain it and possess it in the correct way. In each scene, I can feel the angst and anguish of her character. In one particular scene, she has to help her mother design a flyer for her mother’s start-up and you can feel the impatience radiate as her mother ignores her advice on an easier way to complete the task. Even in the moments where she is manipulating others, her mainly expressionless face exudes coldness but also a slight joy in what she’s doing. In the beginning, you are told that she has a slight propensity for violence but as the film continues, Bentancur’s subtle, internalized performance reveals more and more of it until the propensity is completely realized by the film’s end.

Garibaldi’s direction, however, remains the true highlight of the film. It is incredibly sublime and steadily composed. The Sharks is a slow-burn but it never feels tedious or dull as Garibaldi guides us through Rosina’s journey by showing it through Rosina’s gaze. Garibaldi shot most of the scenes from either Rosina’s direct point-of-view or her eye level, which helped elevate the film by truly putting us in Rosina’s mind allowing us to see what she really sees. Garibaldi even builds an excellent atmosphere outside of Rosina’s mind. She inserts little updates on her family and the townsfolk and their response to the shark sighting while blending it with a synthpop score that builds a sense of intensity and urgency. Garibaldi was able to create an intense atmosphere in and out of Rosina’s mind and it never feels slow, even in the scenes where you can tangibly feel Rosina’s boredom with her family and daily life.

The Sharks is an accurate portrayal of teenage life as you come to terms with who you are, what you want, and the struggle to find the correct way to get it. Rosina’s boredom, angst, jealousy, and anger are all palpable as Garibaldi crafts a wonderful tale of growing up while also attempting to trap sharks and men. The Sharks has introduced Garibaldi to the world stage of cinema and I’m excited to see what she does next.