The famous story of Cyrano de Bergerac is about an intelligent and fearsomely talented man who is unable to profess his love to his cousin Roxane because he is self-conscious about his enormous nose. In the original play, Cyrano helps the handsome but dim Christian woo Roxane through writing letters and other more improbable means. This story seems to be even more suited to modern times than when it was written over 100 years ago by Edmond Rostand. During this time when many of our major social interactions are online through the many layers of social media, it would have blown Cyrano’s mind just how completely one can create an entire persona from mere words. 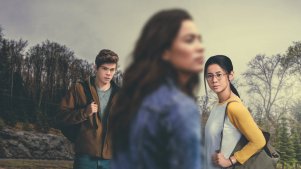 In The Half of It, Ellie (Leah Lewis) plays Cyrano to Paul (Daniel Diemer), who is trying to woo the deacon’s daughter Aster (Alexxis Lemire) in the small town of Squahamish, Washington. Ellie is a smart and talented yet introverted teenage girl who feels stifled by the mostly White and insular community she is surrounded by. Everything she does is geared towards trying to get out of this town including playing organ for the local church, despite being a staunch atheist, since it would look good on her resume. It is through her side hustle of writing school papers for money that she becomes involved with Paul, who despite his good looks and popular status as a jock, knows that he is lacking in the verbal department. His crush, Aster, is not just already involved in a relationship but is as fiercely intelligent as Ellie and into the same books and culture that she is. Despite initial resistance, Ellie eventually agrees to help Paul in his quest to woo Aster even as she struggles with her own budding attraction to his object of affection.

This plot description makes this movie sound very predictable. In fact, director Alice Wu isn’t that concerned about upending the tropes of the teen romantic comedy. There are predictable misunderstandings and falling outs aplenty and even an awkward declaration of true intentions in this movie. However, the real charm of The Half of It is in the little passages towards those expected notes. In a traditional romantic comedy, Ellie would have been the devious know-it-all who would have play the lunkhead Paul like a fiddle, but instead a true friendship develops between the two. Ellie becomes a somewhat bossy yet caring mentor who tries to get Paul to read better books and watch classic films. Paul forms an unlikely friendship not just with Ellie but with Ellie’s father (Collin Chou), who doesn’t even speak English well.

They are also both each other’s unlikely sympathetic ears as they say things to each other they would never say to other people. Even in scenes that are obviously meant to be played for laughs, such as when Paul has to resort to having Ellie text for him on his first real date with Alexis, there is an underlying sincere desire to communicate despite the inability to do so. And though Ellie is often in the right, Paul has no problem calling her out for not being as emotionally honest as she could be.

The Half of It marks the return of director Alice Wu, whose last and only feature Saving Face was back in 2005. In Saving Face, which also features queer and Asian-American characters, Wu displayed a remarkable empathy for not just the lesbian couple at the center, but for every character. There were no stock villains in that film, and The Half of It is very much in the same mold.

Though representation clearly matters to Wu, she does not want it at the expense of characterization. The audience gets to know Ellie, Paul and, to a lesser extent, Aster as fully-fleshed out characters. Rather than relying solely on the relative novelty of focusing on a lesbian Asian-American girl, Wu devotes so much time to rich characterization in The Half of It that it makes this familiar story feel fresh and rich. Ellie and Paul’s longings are not trivialized, as young desire tends to be in even the best-intentioned young adult movies. Even when it almost derails in the last twenty minutes or so, the characters remain genuine and the resolution is satisfying without being cloying or trite.