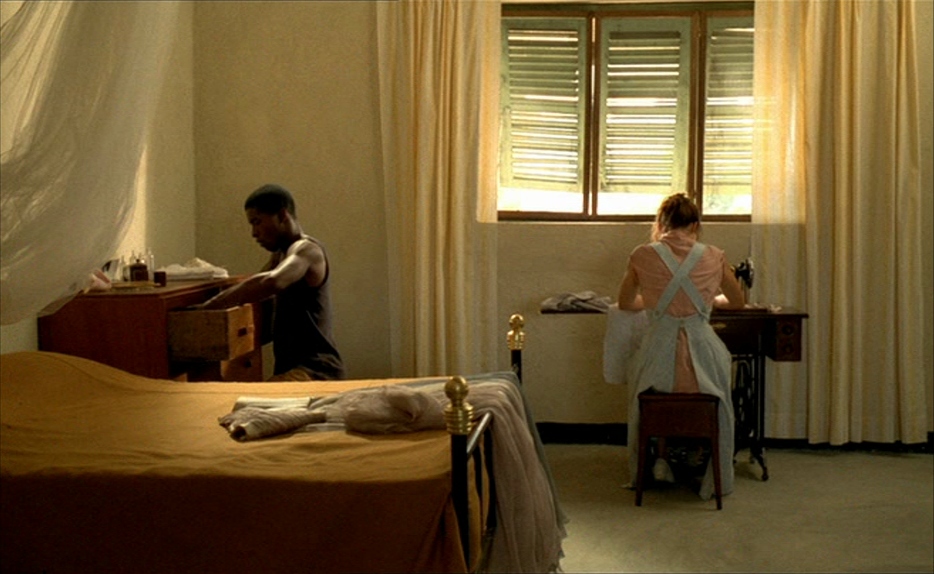 Claire Denis made herself known to international audiences with Beau Travail and more recently American audiences with the grim yet hopeful sci-fi High Life. Her films evoke a visceral response, Denis never the one to shy away from corporal imagery and existential themes whether through the homoerotic Beau Travail, bloody Trouble Every Day, or the sexual undercurrent of High Life. A number of critics have recently explored Denis’ films, one of just many reasons why we’re celebrating her work this month as part of our Retrospective Roundtable. 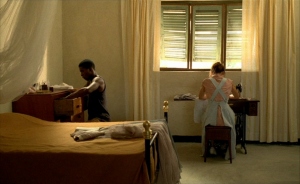 Claire Denis is one of the few White filmmakers who regularly explores Africa and the legacy that colonialism has wrought on the continent. In Denis’ films set in Africa, her White characters always seem alien, unable to negotiate their surroundings capably. Chocolat seems to be drawn at least partly on Denis’ own childhood in French Cameroon. France Dalens (Mireille Perrier) remembers her childhood in French Cameroon, especially her mother Aimee (Giulia Boschi) as she struggles to adjust to her new life.  Aimee is also attracted to a young native servant Protee (Isaach de Bankole), which is a source of tension in the household that ends predictably badly for Protee. Denis films most of Chocolat in wide shots, to deliberately distance us from the characters. This distance is also a reflection of the White characters’ attitude towards the native population. Because Chocolat is her first feature, one can see how she is searching for her own voice as she draws from other filmmakers such as the ones she worked for – Wim Wenders and Jim Jarmusch. However, even in this early feature, she brings a gimlet-eyed clarity to racial relations that still rings true even to this day and really capture what most White Europeans’ attitude towards colonized peoples really is – at best benignly condescending, at worst actively destructive. 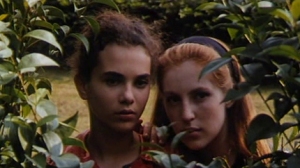 Following one night of a French teenage girl desperate to lose her virginity at a party, US Go Home is a simple but elegant ode to adolescent naivety, elevated to masterpiece status by its unwavering devotion to empathy and understanding above all else. Where many coming-of-age movies misconstrue their youthful perspectives with a feeling of adult interference or cinematic gloss, US Go Home remains true to its protagonist Martine at all times, refusing to abandon her even during her most vulnerable moments of confusion and disappointment. It doesn’t hurt that Denis has a phenomenal actress in Alice Houri (who she would employ again most prominently in her next film Nenette et Boni), who encapsulates everything that’s so uncomfortable about one’s teenage years so perfectly that the film practically rings with second-hand embarrassment and sympathy. We watch as Martine tries and fails several times throughout the night to find an agreeable hookup, standing awkwardly in the corner as she sips her drink and observes her more confident friend effortlessly command the attention of several attractive young men. Even with the obviously vast differences in experience between male and female adolescence, it is difficult for me to recall another coming-of-age film that so subtly captures the embarrassed isolation I often feel myself at social gatherings and parties. It’s an immensely frustrating feeling, an inability to properly communicate desire and interest, a skeptical disappointment in oneself. Experiencing it is also just another part of growing up, and Claire Denis demonstrates through this film that she understands that perfectly. For that reason and many others, US Go Home remains one of my personal favorites of both Claire Denis’ filmography and coming-of-age films in general. 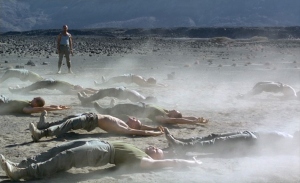 A non-straightforward adaptation of Herman Melville’s and Benjamin Britten’s Billy Budd (the music of the latter featuring prominently in this film), Beau Travail follows a regiment of the French Foreign Legion as they train in Djibouti. Denis Lavant plays Galoup, the leader of the regiment. We know from the very beginning that something will force Galoup to leave the regiment since the film soon settles into Galoup’s mental voiceover. That something comes in the form of Sentain (Gregoire Colin) a handsome, young soldier who immediately ingratiates himself with the rest of the regiment (except Galoup) and soon with the visiting Lieutenant Colonel Forestier (Michel Subor), much to Galoup’s dismay.

Denis’ brilliance is that she takes a classic story, a really strange classic story that has been open for interpretation due to its being unfinished, and made it something truly unique. On the surface, if Beau Travail had been less artistically directed and more straightforward, this easily could have fit into the post-Tarantino era of cinema of hyper masculinity and heightened style and dialogue. The plot, the military setting and the abusive behavior we witness resemble movies like Full Metal Jacket, a troubling, flawed movie that is still brilliant. Instead, even as Denis exemplifies these genre tropes, she is able to subvert them as well. The training sequences are not just for the express purpose of physical enhancement- they are aesthetic set pieces. Lavant’s jealousy is tempered by the lingering shots on Sentain and the other soldiers’ beauty. Sentain’s fight against authority has real stakes, given the unforgiving nature of his physical environment. We are aware from the beginning of the unique and very narrow point of view that this film embodies, yet we go along with it because it makes us see these images (and this story) in a startling, new way.

Trouble Every Day may seem like a blip in the grand scheme of Claire Denis’ filmography, but what was once a strong contender for her most polarizing film might just stand among her best. Upon release, Trouble Every Day was lambasted by critics for its inordinately abstract and under-written screenplay — to categorize the film as inaccessible is an understatement. Written by Denis and Jean-Pol Fargeau, Trouble Every Day can be best described as an existential study on sexual instinct, primitivism, and infidelity, among others — veiled as a grotesque erotic thriller. The script is minimalist — awkward to many — and it is perhaps appropriate to characterize Denis as a filmmaker whose densely layered visions supersede that of other aspects; ponderous philosophical musings come at the expense of naturalist dialogue. Set in the city of Paris, the film follows somewhat of a dual narrative, following an American couple and a French neuroscientist.

Dr. Shane Brown (Vincent Gallo) and his wife June (Tricia Vessey), visit Paris on a vacation for their honeymoon. While June is excited about the prospects of the trip, Shane has other matters in mind. Rather than a romantic week in France, Shane intends to track down the whereabouts of Dr. Léo Sémeneau (Alex Descas) and his wife, Coré (Béatrice Dalle) — two individuals that Shane has a shared history with. On the flip side, Léo — to keep it vague — struggles to contain the more “aggressive” qualities of his spouse. Though dialogue is sparse — this is very much a film reliant on gesture rather than spoken word — the casting is appropriate and each star delivers a suitably well-acted performance, notably the infamous and eclectic Vincent Gallo. Denis’ themes are stark and compelling, working in perfect conjunction with the gory and garish, often dreamlike, imagery of the film. Her emphasis on minimalism creates a detachment akin to the characters of the film. Trouble Every Day is a challenging film, and while it never garnered the following of some of her more acclaimed works, it is wholly unique and fascinating, one that is worthwhile for anyone interested in Denis’ filmography.

Like much of Claire Denis’ filmography, 35 Shots of Rum is a work told most poignantly and delicately through its music and dance. And, like much of music, to me 35 Shots of Rum is more about a feeling than any concrete idea. The film’s main musical theme (composed by frequent Denis-collaborator Tindersticks), unfolds over the opening credits with an overwhelming suggestion of comfort, stability, and familial love – akin to the sensations of snuggling under a heavy blanket or receiving a warm hug. It’s fitting then that the film tells the simple story of a father (Alex Descas) and daughter (Mati Diop) living in such a situation of stability and warmth, apprehensive toward the inevitable life changes clearly awaiting them. Later in the film, the father, daughter, and their respective dates gather in a cozy bar to escape some rain after their car breaks down. Under the intoxicating rhythm of ‘Nightshift’ by Commodores, the relationships between all four of the characters are laid bare by their dancing, body language, and hesitant glances. This is not the final scene of the film, but it is assuredly the emotional climax of their story. Along with Vendredi Soir, 35 Shots of Rum is among the most tender and conflict-free of Claire Denis’ work, yet it’s for this precise reason that it’s one of the most emotionally affecting and memorable films the French director has made.

Having grown up in various areas in Africa that were under French colonial rule at the time, Claire Denis has made an entire career of wrestling with the implications of colonialism on the African continent. White Material, her most recent film to be set in Africa, this time in present day (2009) in an unnamed country that was still apparently part of colonial French Africa, sees her once again taking up deeply political material but making it something understandable. Though the story is about a white French woman (played by Isabelle Huppert in perhaps her greatest performance), and her refusal to leave a coffee plantation despite eruptions of violence in the country, Trouble Every Day makes the damage that people like Huppert’s character had done to the country the real focus of the story and it makes no effort to paint her in a flattering light as she places more importance on beans than human life. With White Material, Claire Denis truly demonstrated her prowess as a director and writer. She distilled hundreds of years of racism, genocide, exploitation, politics, and economics into something that still feels intimate and like a deeply personal reckoning with her own heritage and upbringing with an artistic grace to it all, even in the most violent moments.

In her 2018 science fiction horror High Life, Denis blessed audiences with her long-awaited English-language debut, with this challenging cocktail of nihilism, misanthropy, and human survival. Starring Robert Pattinson, Juliette Binoche, and Mia Goth, the film focuses on a group of criminals sent on a one-way black hole exploration mission for scientific experiments. Whilst serving the death sentence aboard this doomed craft, the crew experience violence, manipulation, and forced sexual encounters. Returning to work with Denis after 2017’s Let the Sunshine In, Juliette Binoche plays the perverse and proud Dr. Dibbs, who experiments with artificial insemination on the female prisoners. The film explores various themes of life and death in true Denis form, a balancing act of nihilism and optimism. Through striking up a friendship with Robert Pattinson, an actor who now prides himself on featuring in established auteur’s films, Denis presents this oozing dense space drama that despite its challenging nature is ultimately rewarding. The prominent undertones of hope can be felt struggling for breath throughout, be it scientific discovery and advancement for the greater good or a simple form of parental love.

High Life is perhaps the science fiction film audiences would expect Denis to direct, a complex and disturbing eroticism: from the ‘fuckbox’ to the confounding gratification, there is a deeply human repulsiveness portrayed. A truly uncompromising journey to the void.

0 comments on “The Films of Claire Denis”