When it comes to Hungarian cinema, there are few names bigger than Béla Tarr. Known for his slow works that often have a bleak telling of fairly mundane stories, he has repeatedly made films that are distinctly the works of someone who grew up in Cold War-era Hungary. Nevertheless, all have such high levels of craftsmanship and wide reaching themes that they feel close to anyone watching them. Sátántangó, Tarr’s seven and a half hour masterpiece of slow cinema, is his most exemplary work and one of the most astounding things ever put to film.

Initially, Tarr hoped to make the film in 1985, following the release of the book it was based on, but the tumultuous political situation in Hungary at the time prevented him from making it for years before it finally received a release in 1994. During production, Tarr only used the script written from the novel as an outline and relied heavily on improvisation despite including every story beat of the novel, something no standard-length film could hope to do with almost any book. This likely caused a final product very different from what would have occurred in 1985 had government censorship prevented the film being made as its final form examines a Hungary in a transitional stage, following the fall of communism, something which hadn’t yet happened when Tarr first became attached to the project. Still, the core of the plot remains the same in both book and movie. A man who was presumed dead returns to a town in Hungary to persuade villagers to form a commune with him in an exercise that is never fully clear, all imparting a sense of dread and bleakness. It takes a hard look at the hardships caused by the Hungarian government and the less than ideal ways people could cope with them. It’s no wonder it faced backlash from the government it was criticizing that prevented it being made until after the institution of (illiberal) democracy. 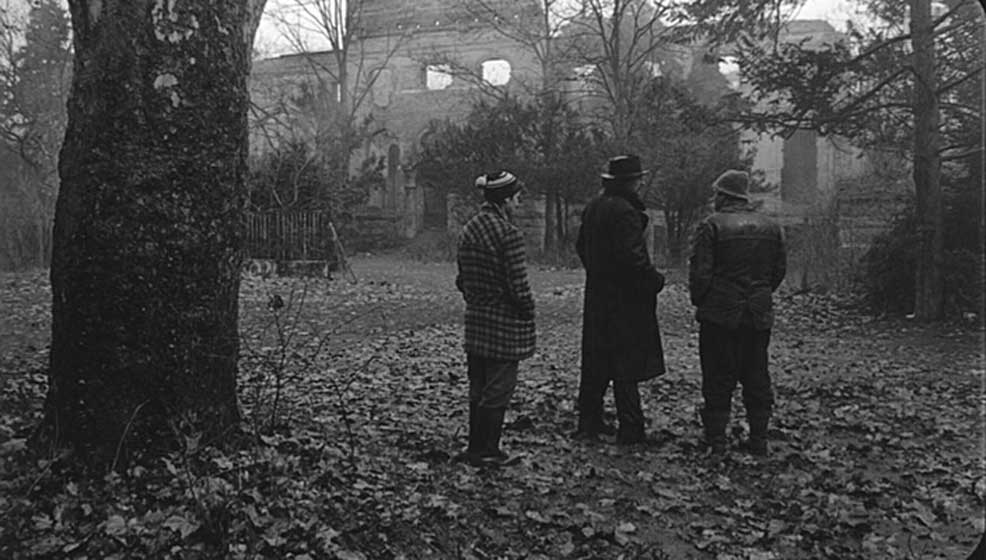 Sátántangó is made of twelve chapters which follow different people and show their lives overlapping, with time often jumping backwards to follow different characters during the same time periods, leading to the eventual convergence and subsequent divergence of the characters’ stories. It’s somewhat of an odd structure, with its segments sometimes directly following each other and sometimes not clearly forming a connection until later, as placement within the story sometimes takes a long time to decipher. It’s a necessary device, however, especially to make a film of such gargantuan proportions while remaining engaging throughout. In fact, the film, and the novel it was adapted from, have presentations that are not modeled after traditional storytelling conventions but after, as the title would suggest, a tango, with movement forward and backward in different steps.

Where most long films have so much in them that they couldn’t fit their narratives in a standard sized film, the plot of Sátántangó isn’t one so dense that it couldn’t be condensed into something closer to two hours in length. In fact, the narrative is simply a backdrop for the film’s style. Where so many films prefer to focus on the plot its delivery, Sátántangó has plot is a secondary consideration. However, it’s far from the classic style over substance trap some films fall into, and instead the style is the substance. Plot points are generally delivered in lengthy monologues that come about once per segment but all the rest of the time is filled with silent long shots. The long shots, juxtaposed with the dialogue-heavy scenes, serve to make the transitions between the two jarring, mirroring the tumult of the times in Hungary being depicted. Sometimes the long shots follow characters going about their lives, sometimes even more innocuous subjects like cows walking around, but they are always beautifully presented. Especially with the new 4K presentation that was shown at the Lincoln Center in New York (which is now available online), every shot could be framed and fit right in at any art museum.

The slowness of those scenes that don’t deliver any plot is perhaps the most integral part of the film. Most of life is filled with unimportant moments that would have no meaning to anyone else watching them (and have little meaning to us as we experience them), but they are nonetheless important as part of our experience and they underscore how important the moments that do push life along are. The plot of Sátántangó is interesting and the plotless scenes are impressive to watch, but it isn’t until they get put together that either attains any of their meaning. If it wasn’t for the hours we have to ponder the film’s sparse but stunning photography without any new narrative information being introduced, the film wouldn’t have nearly the same impact. Sátántangó presents a gloomy view of humanity, wallowing in the despair of a ruined country, but it is in those moments of reflection that we get to piece together its narrative and messages to find something profound. In the end, we come away not just with a feeling of hopelessness but a recognition of the beauty that exists in the worst conditions.

0 comments on “Sátántangó: A Dance of Cold War Despair”