In the past few years, Taika Waititi has practically become a household name due to his association with the Marvel franchise and being fresh off of an Academy Award win for his Nazi satire Jojo Rabbit. With increasing clout, however, comes increasing public knowledge of past creative output and the 2014 film What We Do in the Shadows is slowly becoming one of pop culture’s biggest landmarks in the genre of horror-comedy. This film is a hilarious look at the “regular life” of a few vampires and excellently captures Waititi’s tone that originally made his filmmaking abilities so outstanding. Although he had already been a powerful force in comedy in New Zealand for quite some time, many people around the world had not yet been exposed to his deadpan brand of humor until the film’s Sundance premiere. Since then, this film has only grown in popularity and continues to please fans of both genres with exciting horror and awkwardly supernatural humor. 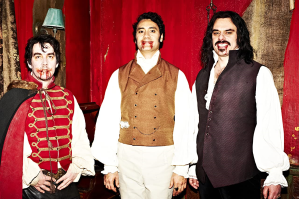 Filmed by a documentary crew chronicling the time leading up to a secretive event known as The Unholy Masquerade, this film follows three vampires named Viago (Taika Waititi), Vladislav (Jemaine Clement), and Deacon (Jonny Brugh) who are flatmates in Wellington, New Zealand. They have learned, over the course of their eternal lives, how to deal with things such as werewolves, zombies, and witches. However, now in a modern world full of new technology, ex-girlfriends, and hipsters, they are forced to learn how to adapt.

Taika Waititi might have been one of New Zealand’s most revered faces in filmmaking and comedy before this film’s release but this vampire satire is the piece of art most responsible for bringing him into the mainstream. Written and directed by Waititi and creative partner Jemaine Clement, What We Do in the Shadows is the epitome of their storytelling talents. The film itself, shot and paced like a documentary, might be a bit awkward at times with its direction of the story but the comedy is really what thrusts it forward through its quick but wildly entertaining 86 minutes. Portraying these characters as normal New Zealand civilians trying to fit in makes for so much of the unforgettable humor throughout and it is undeniably amusing to see the contrast between their old world and our new one. The introduction of Nick (Cori Gonzalez-Macuer) as the young hipster who gets bitten is the perfect example of this and seeing how the flatmates try to ease him into their lifestyle is consistently hilarious. All of these character relationships are done with such dry comedy that might not make one laugh out loud but rather sit and snicker about how clever the gags can be. This is what makes Waititi’s style so fantastic and for this particular film, it is best to just bathe in the awkwardness of it all. One really starts to feel for this eclectic group of nocturnal killers and despite them being constantly in pursuit of their next victim, Waititi and Clement are able to dig out the darkest humor in all of these characters’ situations.

For a film with such a small budget of $1.6 million, these two filmmakers are able to do wonders that would not have nearly the same effect had it been produced on a larger scale. The physical comedy throughout this film works so well because of the smaller and more practical routes they had to take to make their audience laugh. The special effects are used just the right amount to make the spectacle of vampires flying and blood bursting even funnier. Revolving around the seemingly mundane lives of these tenebrous monsters is also such a hysterical way of portraying them. Compared to the more dramatic representations of the creatures in pop culture such as Twilight or Interview with the Vampire, this film utilizes dull everyday activities to show that they are just people living in Wellington who happen to need human blood to survive. The constant references to other vampirical works and classic monsters such as Dracula and Nosferatu work in wonderful ways to show the self-awareness that Waititi and Clement carry in their work. They both brilliantly expand the mythos of modern vampires by showing them as people with actual personalities who just want to fit in. This was an excellent choice and allows them to delve into their dark and murderous backgrounds with a needed sense of flamboyance, which is hilarious. Although his humor might be more graphically mature in this than some more of his recent works, the New Zealand comedian’s flair continues to permeate his filmography in more subtle ways.

Waititi’s style is as refined as ever in this film and his use of dry humor and lovable characters carries on with him even today, however to a lesser degree. What We Do in the Shadows is the film that made me personally fall in love with his brand of storytelling and that same love has translated to other audiences just as well. While still very well-considered an indie compared to other feats that Waititi and Clement have accomplished since its release, this movie has even gone on to spawn a critically acclaimed, American TV adaptation and the supernatural powers of this comedic story never cease to draw newcomers in for a taste of its blood.

0 comments on “What We Do in the Shadows: The Rise of New Zealand’s Taika Waititi”