Coming-of-age dramas have been around for decades so at this point it’s hard for any of them to break new ground. Babyteeth, Shannon Murphy’s directorial debut, doesn’t seem too concerned with doing so. But the film almost feels like it owns up to it- it knows it doesn’t exactly have anything original to say and it doesn’t care. It’s more concerned with taking the audience on the characters’ journeys, regardless of whether they have previously seen them or not. 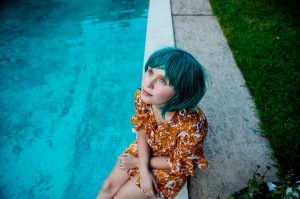 The film follows 16-year-old Milla Finlay (Eliza Scanlen), her budding romance with 23-year-old junkie Moses (Toby Wallace), and her parents, Henry (Ben Mendelsohn) and Anna (Essie Davis). Milla’s controversial relationship is permitted by her parents in fear that it may be her last; she has been diagnosed with terminal cancer and has already started chemotherapy. Henry and Anna’s relationship is just as complicated as his job as a psychiatrist leaves him with a pendence for keeping her medicated while she longs for her days as a classical pianist. Yet their concerns are often put to the side as they cope with their daughter’s dying days. Calling them overprotective parents would be an understatement, but Milla gets the chance to live more in her relationship with Moses than she ever had before.

Several tropes of the genre can be found in Babyteeth: the teenage girl with cancer, more-or-less doomed relationship with the love interest, complicated relationships with parents, etc. Murphy and writer Rita Kalnejais (who adapted the script from her own stage play) do not shy away from them. In fact, one could say they even embrace them, wearing the heavily sampled influences on their sleeves. It doesn’t exactly take away from the drama within the film, but it often seems to minimize it. At times the audience may be asking themselves why they should be invested when they have been invested so many times before.

But what Babyteeth lacks in originality of plot, it makes up for in its acting and technical chops. The heavy use of close-ups and handheld cinematography gives the film a sense of authenticity, meanwhile the production design in the party scene seems like something out of a dream. The aforementioned close-ups especially benefit the characters’ more strenuous and tender moments.

Davis and Mendelsohn are perfectly matched as Milla’s struggling parents, going through just as much in their own personal lives as they do as a couple. Wallace plays a convincing rebel who’s eventually able to win the hearts of not only the initially disapproving parents, but the audience as well. And of course Scanlen gives what could easily be an early career-best performance if she hadn’t already proven herself in projects such as Jean-Marc Vallée’s Sharp Objects and Greta Gerwig’s Little Women. Her ability to go from vibrant and bubbly to tragic and vulnerable within a single scene is impressive and audiences should be eagerly awaiting future endeavors.

Overall, Babyteeth is a film with a lot of heart that is sure to win over a lot of audience members. However, anyone looking for a title that brings something new to the crowded teenage genre might rather look elsewhere.