Artist, writer, director, and former Talking Head David Byrne takes to the stage to deliver a timely call for social betterment. In a Spike Lee joint, the multi-hyphenate Byrne presents art and musical theatrics on Broadway that echo much-needed sentiments of hope and better tomorrows. Whilst Byrne will be forever attached to The Talking Heads’ and Jonathan Demme’s critically acclaimed live-music film Stop Making Sense, American Utopia is brilliant and unique in its own right. Spike Lee lends his directing expertise as the concert covers a range of social issues including the Black Lives Matter movement. 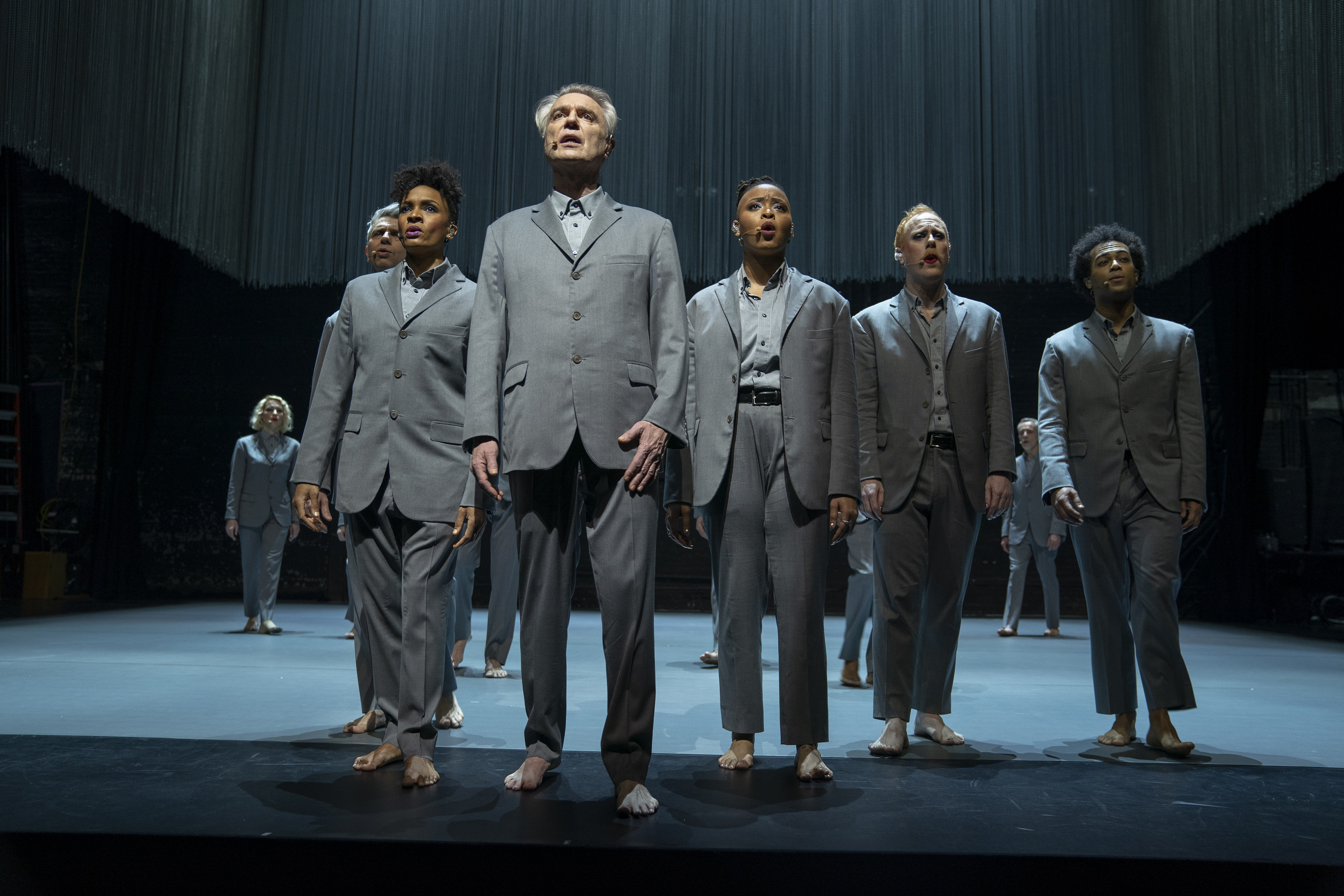 The set is ambitious and dynamic, placing both its audience in the auditorium and the audience at home together into its intimate perspective of Byrne’s inner sociopolitical voice. A balance is struck between industrial greys, sleek suits, barefoot dancing, and avant-garde performative gestures, allowing a more clean and uncluttered platform for Byrne’s message. What was a world tour has become a well-oiled Broadway production for the pandemic age, which the film acknowledges when the attending audience is thanked for leaving their homes. Lee’s experience and keen eye for visuals are present throughout as we open from above looking down on Byrne, sitting patiently with his model of a brain, ready to begin. Soon, we are eye to eye with the man himself, as the stage rises and the wall of beads shimmers around him.

Rewarding himself and viewers alike, Lee offers Talking Heads fan service as classics feature on the setlist that the camera records intently. Similar to Stop Making Sense, the show begins with Byrne alone until his ensemble gradually emerges. The music performance becomes more dynamic visually with the eclectic choreography of Byrne’s varied band members, all adorned in the same grey suits. Unlike Byrne’s iconic ‘big suit’ from Stop Making Sense that made him tower disproportionately, his ensemble moves around him here to create a sense of uniformity and unity. The palpable sense of joy is uplifting as Byrne and his band enjoy their symbiosis, with Byrne leading the way.

Through brilliant intervention, individual musician introduction by Byrne slowly transitions to the effervescent ‘Born Under Punches’, one of several Talking Heads hits. Lyrically, Byrne has always strived to cover smaller constructs of human life alongside the larger themes of love and sex. n American Utopia, he offers his softer side alongside his renowned eccentricity. Whilst boasting some hits, the setlist also features a stunning acapella rendition of ‘One Fine Day’, from his collaboration with Brian Eno Everything That Happens Will Happen Today. The encore, ‘Road to Nowhere’ poignantly takes the edge off any lingering ego from Byrne as he eases into his surrounding band in a close physical embrace with the audience.

Byrne also acknowledges victims of police brutality and racism in America’s current political climate, in a moving tribute that feels purposefully echoed by the directing from Lee. This sentiment is most powerfully present in a cover of Janelle Monáe‘s ‘Hell You Talmbou’ and is followed by a reminder of the necessity for everyone to vote in the upcoming elections. Though social disconnect may seem inevitable in pandemic circumstances, the show projects a message of hope, togetherness, and human connection. American Utopia is a much-welcomed hybrid of music, performance, and politically charged theatre that 2020 needs right now. The combination of Lee’s direction with this incredible work of art from David Byrne sounds too good to be true, but it lives up to lofty expectations as the deepest caverns of Byrne’s eccentric psyche take life on stage.