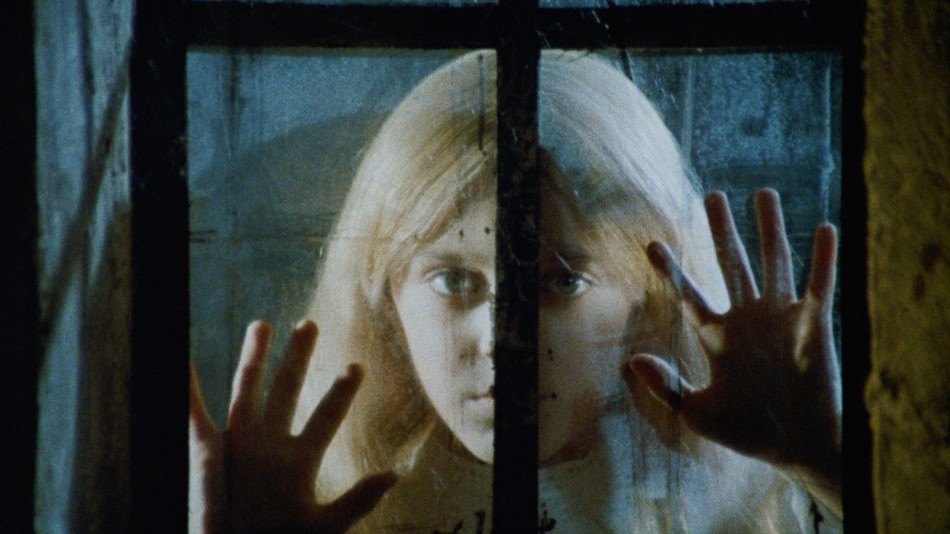 I just love Mario Bava‘s Kill, Baby, Kill. From its onset, it embodies everything that is frightening and fun about small-town horror films. Rife with superstition, rumors of a curse on the town, and a creepy old villa looming in the distance, Kill, Baby, Kill has an atmosphere for the ages. The creepy old bell in the town center is an ominous reminder of the evil that lurks in this small village. Visions of a ghostly little girl haunt them while an opener with a young woman running and screaming into the night before some unseen force leads her to fall onto a sharp fence, impaling herself, set the tone. This is no friendly ghost, but rather with a vengeance, a living curse that grips the entire town with fear, prevents police investigation, and has old thoughts on whether an autopsy is even morally right. As reasoned men such as Inspector Kruger (Piero Lulli) and Dr. Paul Eswai (Giacomo Rossi-Stuart) try to get to the bottom of things, the townspeople call in the witch Ruth (Fabienne Dali) in a desperate ploy to protect themselves and their homes. But, in the end, neither nor reason nor ritual may be enough when revenge is the motivator.

Bava made many classics and by this time had demonstrated his prowess with gothic horror in Black Sunday and giallo in Blood and Black Lace, somewhat mixing the two for this atmospheric terror. It has the mythology, dark and decrepit sets, and gloom of a gothic film mixed with the blood and murders of a giallo, both coming together into this mysterious and ominous picture. The considerable attention to detail on the set is perhaps the hallmark of Kill, Baby, Kill with thick, blue-tinted fog billowing about this village at all times. As a ghostly hand rests on a window pane, emerging from the fog, one can feel a shiver run down their spine. The dark corners of this aging, decaying village with tight streets and corridors as well as heavy shadows always seem to engulf the background and offer little safety to the characters outside. Bava’s stylish and liberal use of color to go along with those shadows adds some flair, blending ominous darkness and prominent blues and greens during repeated chases up-and-down a flight of stairs. Those stairs, shot in overhead or an extreme low-angle by DP Antonio Rinaldi, are a frequent source of brilliance for Kill, Baby, Kill, representing its many visual strengths. From the design with an aged, weary look to them to the colors to the way in which characters disappear intermittently while ascending or descending to an eye-catching spinning shot that disorients and thrills, it is where the film’s production design and cinematography is able to shine. It is not just a set of stairs, but a canvas for Bava to paint upon and paint he does.

While KIll, Baby, Kill’s strengths extend beyond its color, sets, and cinematography, these are nonetheless the defining traits of the film. It is what has earned it so many plaudits and is what serves as the foundation of the film’s frights. Creepy old ruins open the film with dialogue talking about how when one sees such sights, it is clear the town is cursed. Of course, it all turns out to be true and every inch of this place looks like the world-weary, retched, and cursed style of those initial ruins. These sets and the overall style give the film a power all its own, a classic horror movie magic and an innate enjoyability that makes Kill, Baby, Kill nearly impossible to resist for gothic horror fans. The lore surrounding why this ghost kills and even the dramatic zooms on her lurking in windows have a great effect, with her presence felt in every corner as even the utterance of her name causing townspeople to run in terror. It all builds an atmosphere that gives Kill, Baby, Kill the ability to introduce some effective jump scares as well as some more mind-bending terror. As they move about the cobweb-laden old villa that the ghost girl once occupied, seeing her in the corner of a room or suddenly finding oneself in the room they just left is not uncommon, keeping the audience on edge. The dark shadows and fog of the outside give way to the dust and creepy décor of the villa in perfect fashion. Bava was always a master of style, mood, and atmosphere, but it was perhaps never better represented than in Kill, Baby, Kill, an inventive and flashy film that never met a scene it did not think could use more fog.

When it comes to the lore itself and more giallo-style kills it leads to, Kill, Baby, Kill does not disappoint. The lurid backstory of this town, the selfishness and indifference to suffering, and the ominous story of the bell may make one even sympathize with the ghost. The atmosphere is key here with the mere presence of the ghost in a window or suddenly in a room enough to leave one speechless. As she starts to exert her power, it is almost as if she has a Carrie-esque ability, driving characters to self-harm as they drive towards a death similar to the ghost’s own with their cries pointless and their wounds gaping. It can be violent and disturbing at times – never more disturbing than the opening kill – and it proves a perfect pay-off for the film’s mood. It is not all fluff and style nor is the terror of the townspeople misplaced. It is all well earned as they have seen enough of their neighbors die to know that the ghost is to be feared as she can strike at a moment’s notice with absolutely nobody being safe. Even Ruth is powerless in the face of her ghostly presence, offering little respite for the condemned citizens. They are truly doomed and cursed, left to wait for the moment they see the ghost and are driven to kill themselves in some horrifying fashion. It is a powerful feeling, adding greatly to the mood while driving up the terror once a tiny hand is seen on the edge of the frame.

Kill, Baby, Kill is one of the finest films from one of the best Italian horror directors of its time. Mario Bava’s trademark style and flair are on full display with a spine-tingling atmosphere and a classic movie magic feeling coursing through its veins. A quintessential film about a small-town with a wicked curse and a creepy gothic castle, Kill, Baby, Kill and its liberal use of fog are a must-watch this time of year. It captures all that is spooky, fun, and entertaining about the genre in a chilling package.