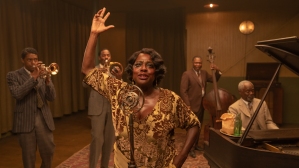 Character creation is one of the most important visual aspects of filmmaking, both in the way they are written and directed, and the way they stand out on the screen. The on-screen presence that characters radiate owes a lot to the hair and makeup department, which is why the award for Best Makeup & Hairstyling is so crucial. Ron Howard‘s Hillbilly Elegy relies a lot on hair and makeup, as the two lead performances from Amy Adams and Glenn Close heavily utilize the aesthetics of aged makeup. The design of their characters is very well thought-out and while the film has been critically panned, this film succeeds in creating their characters incredibly well. Matteo Garrone‘s Pinocchio is another that heavily relies on this, particularly because the lead character is a wooden boy. While some CGI was used for the fantastical elements of the film, the use of hair and makeup is wondrous and really helps to ground this film in the story’s magical environment.

Certain genres also tend to need more focus on the hair and makeup department more than others and period pieces are one of those genres. David Fincher‘s Mank uses it extremely well and helps to design the characters as members of LA’s 1930s culture to a tee. From the gaudy hairstyles to the aged makeup of the titular character, the level of detail put into his film is extraordinary. George C. Wolfe‘s Ma Rainey’s Black Bottom is another period piece of sorts that uses hairstyling and makeup to its advantage. Viola Davis‘ character is the film’s embodiment of hair and makeup excellence, as she is almost unrecognizable as the renowned blues singer Ma Rainey. Since this film is an adaptation from a stage play and takes place in one location, hair and makeup are particularly important to tell the film’s visual story and right off the bat, the department does a great job of making sure the audience knows this story takes place in 1920s Chicago. Autumn de Wilde‘s Emma is this year’s final nominee for Best Makeup & Hairstyling and it is practically the epitome of a period piece. The lavish hairdos, royal makeup, and unbelievably colorful palette throughout the film are executed gorgeously and there is really something special about the attention to detail these designers put into telling this story.

As tends to be the case, this year there are no nominees for Best Costume Design with a contemporary setting, following the long tradition of awarding period settings and invented worlds, and Emma with its Regency Era dress seems perfectly poised to take home the prize. Continuing an effort to recognize more global cinema, Pinocchio also shows up, making some small waves for the otherwise lesser known film. Mulan brings the most unique flair to this year’s lineup with its colorful Imperial Chinese costuming while Mank and Ma Rainey’s Black Bottom rounded out the category, continuing to rack up the nominations here with some smartly cut suits and a handful of flashy dresses.

American history takes the forefront in this year’s nominees for Best Production Design, three of the titles- Ma Rainey’s Black Bottom, Mank, and News of the World– displaying or inspired by America’s past. News of the World takes us back to the 1870s where a bearded Tom Hanks plays a Civil War veteran who journeys through America to return a young girl to her parents. Opposite of the wilderness is 1920s Chicago where Ma Rainey attends a recording session mired with conflict, though the film mainly takes place within closed doors. And last but not least Mank which portrays Herman J. Mankiewicz‘s writing of the classic Citizen Kane. Mank faces an uphill battle in this category being that the last film shot primarily in black-and-white to win was 1993’s Schindler’s List.

Taking place in the contemporary is The Father and like Ma Rainey’s Black Bottom, the film takes place mostly indoors, observing the mental decline of a man suffering from dementia. The only thriller and big-budget film nominated in this category, Tenet, is Christopher Nolan‘s latest film which traverses time in a unique manner, allowing creativity to take place in the realm of production design with its enormous and occasionally lavish sets.

0 comments on “Predictions for the 93rd Academy Awards”