Eugene Kang: In honor of Pride month, we are looking to Kenya with Wanuri Kahiu‘s 2018 feature Rafiki. This is perhaps Kahiu’s most famous film to Western audiences, but she had received recognition for her previous work, most notably her feature From a Whisper, which practically swept the African Movie Academy Awards. She is also slated to direct the upcoming film The Thing About Jellyfish, based on a popular children’s book and starring Millie Bobby Brown. Rafiki received international attention because of its ban by the Kenya Film Classification Board for its depiction of a relationship between lesbians. The furor was so intense that the Kenyan High Court lifted the ban so that the film could be screened for seven days to meet the eligibility requirement for the American Academy Award. Every screening was apparently sold out.

I am wary of films that find themselves in the middle of media frenzies through no fault of their own, mainly because the people starting the controversy often do so from a place of ignorance and bigotry and have often not bothered to watch the film in question. I am actually glad that I really only knew about the controversy around Rafiki after I watched it. It turns out Rafiki is a lovely, well-considered drama about two women and the community that they live in. Their amorous relationship is central to the plot, but what struck me about Rafiki was the careful attention also paid to the people living there and the physical community. It is a boldly colorful film, which Kahiu has stated she wanted to show audiences the city of Nairobi. And in the city, its inhabitants, most notably Ziki (Sheila Munyiva) whose love for the bright pastels that characterize her look speaks volumes about her character. Even if you saw her and Kena (Samantha Mugatsia) together without either of them saying a word, you already know a lot about their relationship. The color palette is just one of many things I found admirable about Rafiki.

What stood out to you about the filmmaking and/or story, Alex?

Alex Sitaras: As you mentioned, the depiction of Nairobi stood out to me. The film opens with shots of everyday life, from hula-hooping to cooking to shaving, and it seems that the highlighting of the city is deliberate from Kahiu. There’s also a brief shot of a crucifix during the title sequence, which correctly suggested the role that religion would play on the lives of characters as well as the community’s stance towards LGBT people.

And also, the characters. Kahiu does an excellent job portraying nuances to both Kena and Ziki’s characters. Kena seems to be the younger, less experienced with life, tomboy who mostly spends time with boys but isn’t enamored with them. She’s ‘one of the guys’. And awkward. While Ziki seems to be the ‘main character’ of her friends, the person who holds the most influence and say in their friend group. What these women share in common is their father’s running for local office. There’s a subplot of gossipers who oversee Kena and Ziki at a diner, and these gossipers help to emphasize the barriers that must be overcome in order for Kena and Ziki to be together.

That being said, I was also let down partly by these characters’ traits, despite how well Kahiu portrays them. Kena and Ziki both seem to fall under typical tropes of LGBTQ characters – Kena is youthful and lacking in confidence, and she’s drawn in to Ziki in part by her colorful outfits, hair, and confidence. This is a dynamic we see in Blue is the Warmest Color as well, though not as pronounced or caricatured as it was in that film. To me, this detracted a little from the story that Kahiu tells, though in Rafiki it’s more obvious Kahiu’s intent in directing an LGBTQ story is well. I want to note though, even though I’m critical of the characters’ traits it doesn’t impact my perception of Rafiki too much since the film does so much so well.

What did you make of Kena and Ziki’s characters? Curious to get another opinion on this.

Eugene: I see your point about the predictability of the character types. I think this problem really points more to the story than anything, which, while well told, is one that we have seen in many LGBTQ films. I think we should also consider the context as well. Kenya has much harsher laws against homosexuality than many countries do and while Rafiki might seem quite tame compared to other mostly Western LGBTQ films, this film stirred up far more controversy in Kenya than it would have in, say, the United States.

I appreciated how there was an emphasis on how these characters have a place in the community. The competition between their fathers for political office and the tensions that arise from this complication give this a Romeo and Juliet parallel. Yet while Romeo and Juliet can seem like a claustrophobic story focusing on the two lovers and barely anyone else, we see how Kena and Ziki’s actions affect everyone around them. Ziki’s female friend throws a fit of jealous rage when she suspects that her and Kena are intimate with each other. Kena’s father career and business is affected negatively when his daughter’s sexuality is revealed. Not to belabor the Romeo and Juliet aspect of the story too much, but I find a lot of adaptations of that story tend not to focus on the damage the feud causes on the community. In fact, we never get the sense of a community at all. Rafiki, while not strictly an adaptation of that famous story, makes it very clear that relationships of any kind do not take place in a vacuum, and that even the strongest bonds with people can be tested by unexpected circumstances. 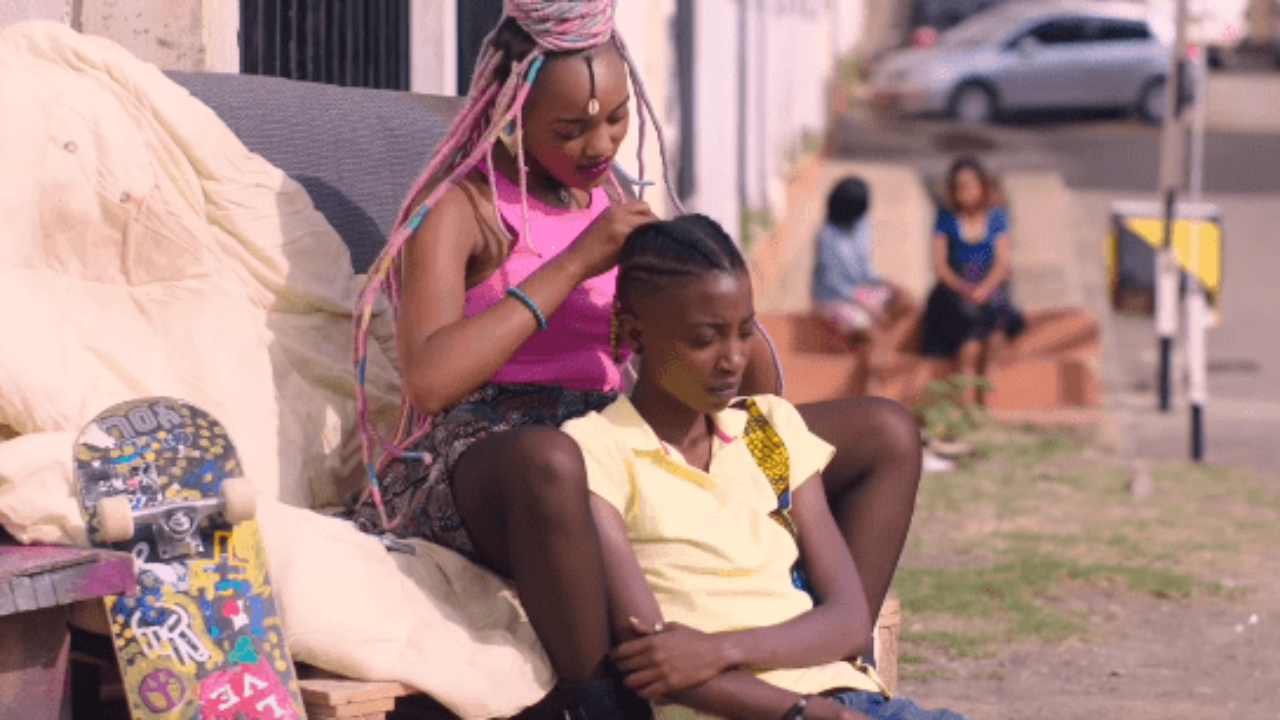 As for the characters themselves, I think Kena was the more fully realized of the two main characters. There is a lack of self-confidence about her that isn’t just attributable to her sexuality and her anxiety around it. Even though she is an excellent student and gets great grades, she ‘resigns’ herself to being a nurse (not a lightweight career by any means). I saw this as a sign of how her father has not really instilled her with the ambition that he clearly has in abundance. Samantha Mugatsia had never acted before Rafiki, and I think that newness really contributes to her character’s introversion and makes her development more weighty and touching. And while Ziki is indeed the more outspoken and confident one, I don’t think her relative lightheartedness is a sign of lack of concern or ignorance. In a community as tight-knit, and, frankly, narrow-minded as the one portrayed, her look is a bold form of expression.

What did you think about the portrayal of community? Were the reactions to their relationship what you expected or did anything surprise you?

In the context of world cinema, for its choice of narrative and progressive themes, watching Rafiki felt a lot like watching Caramel or Wadjda. All of these films are directed by women and dedicate their stories to exploring the cultural and social underlying of Kenya, Lebanon, and Saudi Arabia, respectively. With national cinemas that are young in their history, the films that these women have directed are particularly exciting from a cinephile’s point-of-view.

Relating to your earlier point about the love story at the center of Rafiki having an impact on the community, what did you make of Kena and Ziki’s desire to ‘not be the average Kenyan’? It seems that the community also takes a hold on Kena and Ziki’s perspectives towards love and life.

Eugene: I thought this desire to stand out grounded this story in something familiar to everyone in every culture. Not everyone can relate to coming out or hiding a relationship that faces disapproval. But everyone can relate to not wanting to settle and making something of oneself to some extent. It’s interesting to see that for Kena especially, she shares this desire to distinguish herself with her father, who is running for political office. It is almost predictable that her father does not realize this in his own daughter and would rather have her conform to something that he approves of. Part of the storytelling prowess in Rafiki is the development of this arc for Kena’s father, who ends up having a surprisingly even-keeled reaction to his daughter’s coming out. His reaction also ties into the more hopeful ending where we see Kena finding solace in nature after having to deal with a homophobic patient as a doctor, having finally achieved her dream. Apparently, this ending got some flack from the censorship board because homosexuality had to be portrayed as leading to dire consequences in a weird Hays Code-like tradition.

Overall, I am glad that we got to see this film because of its more hopeful nature. While it follows some of the tropes of LGBTQ stories, Rafiki distinguishes itself with its careful storytelling and characterization as well as its loving portrayal of Nairobi despite the prejudice that can exist there.