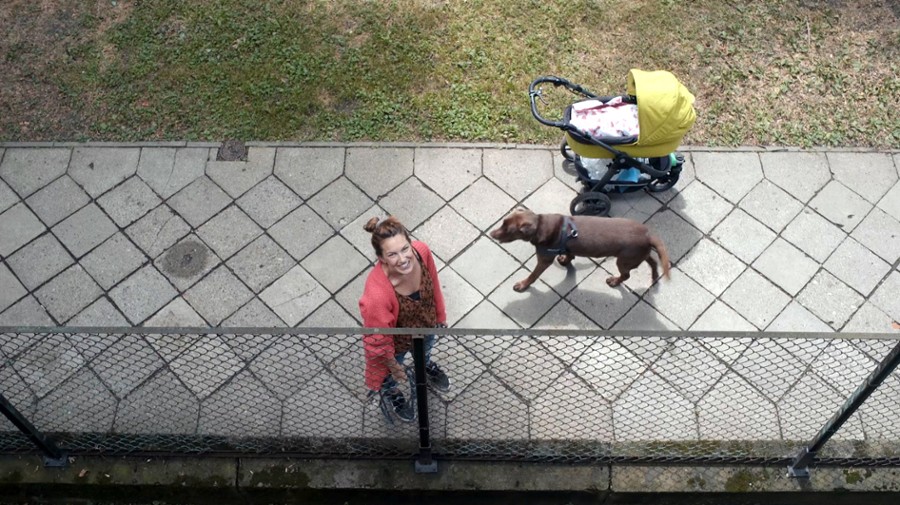 I had intended to cover the Atlanta Film Festival in person – and, in fact, was scheduled to move back to the city the weekend the festival began – but plans had to change and I will now be covering the festival virtually. Nonetheless, I’m looking forward to exploring the virtual catalog and sharing my thoughts on a number of the films, the first of which will be the documentary The Balcony Movie.

A man observes passersby from the balcony of his Warsaw apartment over the course of the year. He strikes up conversation – under difficulty at first – with those who walk the sidewalk beneath him. As time goes by, more people are willing to speak with him, though one never loses the sense that his “actors” always have somewhere crucial they need to be. Thus, The Balcony Movie is a collection of conversation snippets, portraying life as fleeting and providing audiences with a look into what life is like for the strangers we pass everyday when walking about, but likely never strike up conversation with.

Director Pawel Lozinski is interested in the big questions: Who is someone? Why do they do anything? What is the meaning of life? Anachronistically, the small talk comes after Lozinski poses these existential questions, the answers to these questions allowing cameraman and muse alike to become close to one another. Most people are reluctant to talk about oneself – I wonder if the same could be said if this film were to have been shot in Los Angeles or Chicago – though some use the opportunity when talking to Lozinski to vent frustrations or decompress after stressful times. The most stirring moments of The Balcony Movie come from those who have lost loved ones, and know that their memories could never replace those they have lost. A man who lived with his partner for forty years but couldn’t marry him (same-sex marriage is not recognized in Poland) tells Lozinski about his loss, explaining that he would say his “roommate” was his brother in order to justify living together. Another memorable moment comes from a recurrent visitor to Lozinski’s street, an ex-convict who when released from jail was greatly optimistic about life to come, now homeless and depleted of hope. He wonders if he should commit a robbery so he can return to jail.

In all, The Balcony Movie is a fascinating social experiment to observe, and one that no doubt brought Lozinski closer to his community. Lozinski’s wife and dog appear throughout the film, granting Lozinski approachability and allowing us to ‘see’ the seldom visible cameraman through his family. The Balcony Movie is cathartic, exemplifying that the issues we face in our lives are experienced amongst a community. Our struggles are not unique, no matter how alone one might seem. And thus, the film is hopeful in that each of Lozinski’s actors carry on through the seasons their ceaseless pursuit of meaning and fulfillment. I hadn’t originally been searching for a place with a balcony for my move to Atlanta, but now I just might.