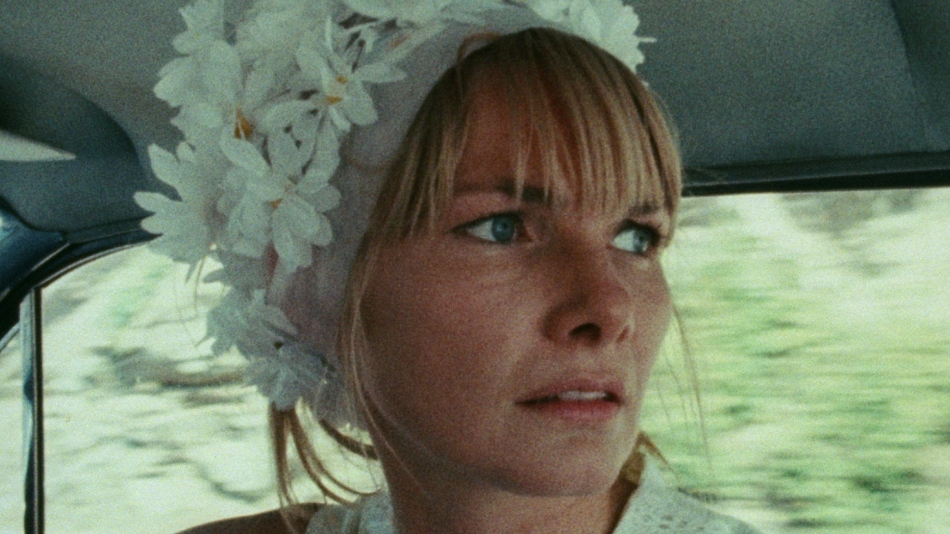 Perhaps the most visually striking and poetic scene in Wanda occurs early in the movie, when Wanda is walking in the black coal fields that surround her house. She is a wearing a white dress and the camera lingers on her, as if fascinated by how such a rare creature had found herself in such an environment.

Wanda Goronski (played by director Barbara Loden) certainly does not see herself as someone special. In fact, for much of this movie she seems to be merely trying to survive, not even live. When her husband requests that a judge grant him full custody of their kids so he can raise them with his new girlfriend, she acquiesces, saying that they are probably better off with him. She cannot hold down the meager job that she has, and it is only by pure happenstance that she finds herself involved with a robber (Michael Higgins) whom she always calls Mr. Dennis, like a child.

Just a few years after the seminal success of Bonnie and Clyde, Loden must have been tempted to make something similar with this story. Instead, she had more modest goals in mind. Though she was definitely limited by her budget of about 100,000 dollars, she probably still would have made her film in this manner – handheld 16mm with real locations and purely diegetic sound. She also claims that she was only marginally aware of the women’s movement and feminism, and that she was more concerned with portraying the oppression of one woman and how relatively powerless she was to fight back against it. After all, Wanda is a poor woman with seemingly little formal education and no real-world skills and no connections.

We don’t really learn much about Wanda beyond what happens her. She does not have a lot of interiority, or Loden does not seem to be interested in giving her any. Much of this film is simply about the stripping away of Wanda’s agency, especially at the hands of Mr. Dennis. Their relationship is more about convenience rather than any personal connection. Wanda stumbles on a robbery that Dennis is committing without even knowing what he is doing in a scene that is tense on first watch, and funny on a second, since Wanda is so oblivious and Dennis is clearly trying to remain calm in a very tense situation. Wanda soon becomes his errand girl, his outlet for sex, and then finally his accomplice in crime. Despite a few perfunctory questions early on about Wanda’s husband and her kids, Dennis never really sees Wanda beyond her function, which is historically how men and patriarchal society have treated women.

Dennis himself is interesting because he has a whole narrative going on that threatens to subsume Wanda’s own. He clearly is looking for some twisted version of the American dream, with Wanda as merely a tool to get there. He even dresses her up in clothes he prefers for her (“no slacks!”) as if she were a doll. He wants to make her look more innocent and virginal, as if to indirectly atone for his life of crime. We also see him later trying to give money to his father at a church, which his father refuses since he knows it was obtained illegally.

In all of this, Wanda is so frustratingly passive. Many people’s reaction to her is frustration or even anger, an urge to her shake her out of her ennui, indifference, whatever you would call it. Even after a whole movie, she remains a cipher. Perhaps she knows that she has very few alternatives and that Dennis provides one of the few ways that she won’t starve. Still, it is difficult to see a woman take this much abuse. But perhaps there are a lot of women like Wanda. In a twisted way, Wanda is the kind of woman a man might think he wants – passive, obedient, silent. Her very presence is a condemnation of men’s attitudes towards women, a dreary and pitiable product of her environment.

While one could possibly argue that portraying a weak-willed woman goes against the best instincts of feminism, many have also argued that strong female characters are red herrings, simply giving a semblance of female strength and not truly challenging the patriarchy. Strong female characters in modern cinema certainly have their own limitations. Either they are unrealistically strong, or they are simply given stereotypically male characteristics such as great physical strength or limited emotional range. There need to be films, preferably directed by women or in which women have a major creative voice, about all kinds of women- strong, weak, flawed, bad, good – which is simply the benefit that White males have been getting in movies for over a century. Loden was so far ahead of her time with Wanda that her sole work remains revolutionary even today.

0 comments on “The Cipher of Wanda”