Ben McDonald: December is looking to be a powerhouse for big names in the independent and auteurist department. First up on the list is the film I’m most anticipating, Paul Thomas Anderson‘s Phantom Thread, starring Daniel Day-Lewis, Lesley Manville, and Vicky Krieps. This is Day-Lewis’s first film since 2012’s Lincoln, and supposedly his last. Though I haven’t made it through all of Anderson’s filmography, what I have seen I’ve thoroughly enjoyed, especially his previous collaboration with Day-Lewis in There Will Be Blood. This film’s plot has largely been kept under wraps, but it revolves around the fashion industry in 1950’s London. From Boogie Nights to The Master, Anderson has been exceptional at period pieces thus far, and Phantom Thread looks to be no different.

Alex Sitaras: Agreed, December is both the best and worst month for one of these threads given that there are so many highly-anticipated films to choose from. For a number of film lovers, Phantom Thread is at the top of one’s to-view list this month and that should come at no surprise given the powerhouse pair that is Paul Thomas Anderson and Daniel Day-Lewis.

As you mentioned, Phantom Thread is a period film and what really grabbed my attention in the trailer was the lighting and use of color. London seems to be entrapped within perpetual fog and even interior scenes are flooded with bright light to the point that indoors seem hazy as well. Additionally, the film’s use of shades of red and blue (particularly in clothing) provide an interesting contrast to the otherwise indistinct colors of old-fashioned furnishing.

It seems the film is a romantic drama of sorts, the film delving into the relation Woodcock (Day-Lewis) has with women, in particular his blooming relationship with his muse and lover Alma (Vicky Krieps). There is a rumor that Day-Lewis’s character is a closeted homosexual and if this is true, this would be relevant to consider given the recurring exploration of masculinity and self-discovery within Paul Thomas Anderson’s work.

Ben: Good catch on the color design, I didn’t notice that on my first watch of the trailer but I definitely see it now. Looking back at the director’s previous period pieces, I think color has been a great tool of his in capturing the essence of the time period. Boogie Nights had popping, saturated colors to highlight the exciting nature of the 70’s and 80’s, There Will Be Blood used rustic browns for its early 20th century look, and The Master had a lot of ocean blues to accomplish its post-WWII 50’s aesthetic. 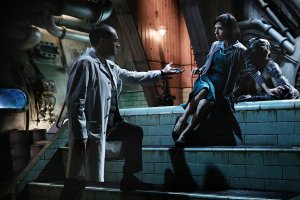 Next up is Guillermo del Toro‘s The Shape of Water. Starring Sally Hawkins, Michael Shannon, Octavia Spencer, and Michael Stuhlbarg, the film looks like a fantastic return to form for del Toro and is being hailed by many as his best work since 2006’s Pan’s Labyrinth. The Mexican director is well-known in the movie world for his imaginative creature designs and adult fairy tales. Taking place during the peak of the Cold War, the film follows a janitor (Sally Hawkins) in a classified research facility who grows fond of a captured sea creature being studied by the US government. The creature design looks very evocative of the classic Creature from the Black Lagoon, and from what I’ve read about the film, it appears that is intentional.

Michael Shannon seems to also have a significant role in the film as a sadistic government official in charge of the creature. Shannon seems to be one of those character actors who can play any role, from despicable to sympathetic, so I have no doubt he can pull off a convincing villain. I for one really enjoyed his entertaining performance as a fanatically religious prohibition officer in Boardwalk Empire, so he’s a big reason I’m looking forward to seeing this.

Alex: The Shape of Water is interesting in that it both seems to be familiar territory for Del Toro, but also something a little different. Like The Devil’s Backbone and Pan’s Labryinth, the story takes place during wartime; however, the protagonists of The Shape of Water are adults rather than children. The Shape of Water can’t be said to be further exploration of the theme of children’s responses to/experiences of warfare. Rather, as Del Toro stated in an interview with Indiewire, The Shape of Water is the first time “[he speaks] as an adult, about [things that worry him] as an adult… [such as] trust, otherness, sex, love, where we’re going.”

Despite Michael Shannon experiencing a breakout year last year in films such as Nocturnal Animals and Midnight Special, I haven’t seen him in a lead role yet so The Shape of Water will likely be my first opportunity to do so. Also, I’ve taken an interest in sign language recently, so Sally Hawkins’s performance as a deaf character who signs in the film is of interest to me. YouTube channels like thedailysign, Deafinitely Dope, and ASL Anissa have great ASL/PSE covers of songs that I enjoy viewing.

Ben: One unique film that I’ve been looking forward to for quite some time is The Disaster Artist. Starring and directed by James Franco, the film follows the production of Tommy Wiseau‘s infamous The Room. For those unfamiliar, The Room is hailed by many as the best worst movie ever made. I personally love it; despite its director’s gross lack of skill in basic filmmaking, it has a real bizarre charm and leaves you laughing. My favorite description of it from someone on the internet is “like an alien watched movies and tried to make one”.

I’ve never been a real fan of James Franco, but his portrayal of Tommy Wiseau here looks absolutely hilarious. Like the strange genre cross, Franco seems to be acting somewhere between parody and dead accuracy. The rest of the film’s cast looks great for the fun tone of the film as well, including Dave Franco, Seth Rogen, Alison Brie, Josh Hutcherson, and Zac Efron. According to The Independent, Franco has 20-25 minutes of shot-for-shot remake of The Room left over from filming, so just seeing snippets of that in the film is worth the ticket price for me.

Alex: James Franco is perhaps the best person suitable for directing and acting in this movie. Franco’s career, like Wiseau’s, has been boggling to say the least although the two both share strong charisma and a sense of doing things their own way- the rest of us can figure them out at our own pace. Also, Franco’s physical appearance in this film is spot on.

Trailers for The Disaster Artist portray the film as a ‘hero’s journey’ of sorts, chronicling the period starting at Wiseau’s arrival in Hollywood to the completion of The Room. The film looks to be a very enjoyable view. In each of us there’s some sense of naïve ambition for our passions and the ways we use to achieve our goals can be quite whimsical if we aren’t properly informed- just like how Wiseau just went and created The Room without any real knowledge of movies.

Taking a total shift in tone, the film I’m perhaps looking the most forward to this month is Happy End (dir. Michael Haneke). Haneke is one of my favorite filmmakers and Happy End looks to be a very timely film for him as well as tread some new ground in context of his filmography. Social media and the refugee crisis play a role in the plot, although some elements (classical music, deviant sexuality, etc) familiar to Haneke’s films seem to return as well based on the trailer. The film stars Haneke veterans Isabelle Huppert and Jean-Louis Trintignant as well as Mathieu Kassovitz.

Ben: Happy End is another one I’m looking forward to as well. I’ve been meaning to watch more Haneke, but both of the films I’ve seen from him (the original Funny Games and Caché) were so incredibly intense and disturbing that I’ve kind of put off watching more. Haneke’s work seems to me to be oppressively bleak and emotionally detached, and from the early reviews of Happy End, it seems that will be the case here as well.

I can’t speak any more to the plot of the film as the trailer was rather cryptic, but one thing I enjoy about Haneke’s writing is how reflective it is, internally on film as a medium, and externally on the world’s issues at large. In Funny Games, for instance, he quite bluntly comments on the bloodthirstiness of movie audiences for wanting to see that type of movie, but also on the devastating effects of violence in general. Like you said, social media and the refugee crisis appear to play a role in the plot, so it’ll be interesting to say the least to see Haneke’s take on both.

Alex: Haneke is quite the divisive filmmaker, but I think the very fact that he is controversial speaks to the success of his post-modern work. He forces audience members to examine themselves and sometimes what one finds in that examination isn’t always pleasant as you noted in your thoughts on Funny Games. The concept of the audience is ever present in his work, whether it be through the breaking of the fourth wall in Funny Games or in a shot of concertgoers gazing at the camera (situated where the stage is) in Amour.

Even though Haneke is far and away not a ‘happy’ filmmaker, I wouldn’t say his work in general is misanthropic or lacking empathy for his characters. In Amour, even though aging and the coming of death is entirely what the film revolves around, Haneke’s portrayal of a man and his dying wife isn’t sadist or fickle. He shows a deep respect for his characters- nevermind the fact the movie is based on the relationship with him and his aunt- yet acknowledges that men and women are eventually faced with the unbearable, death, and are forced to respond the best they can. As expressed in the original Blade Runner, sometimes we are the most human when faced with suffering or experience desperation. 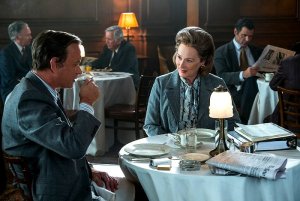 Ben: The final film we’re looking out for in December is Steven Spielberg‘s latest, The Post, a historical drama centered around the publishing of the Pentagon Papers through The Washington Post. The film’s exceptional veteran cast includes Meryl Streep, Tom Hanks, Sarah Paulson, Bob Odenkirk, Bradley Whitford, Bruce Greenwood, and Matthew Rhys. The Post is probably the most traditional film on our list that we’ve discussed, but that’s not necessarily a bad thing. The cast looks great, Spielberg is a talented director, and the film is looking to be a refreshing palette cleanser after some of the other films we’ve previously discussed. There’s definitely something comfortable about watching a Spielberg film, especially a standard historical drama, so this looks to be an enjoyable watch to look out for around Christmas time.

Alex: Not to leave out Fargo (TV) veterans Jesse Plemons, Carrie Coon, and Michael Stuhlbarg as well. The Post has a stacked cast. Plus first time Hanks and Streep have starred in the same film; it’s practically begging for Oscar nominations. But, irregardless, the film has the potential to be really impactful because of its timeliness. American journalists are distrusted perhaps more than ever and the film will likely take a stance or make some implications in regards to the role that journalism should have in politics and influencing citizens. I wasn’t too interested in this film when it was first announced, but I’m taking an English course that focuses on detectives and reporters that has caused my interest in this film to increase. Best case scenario, this film earns its association with classic films about reporting such as All the President’s Men.

0 comments on “Most Anticipated of December 2017”