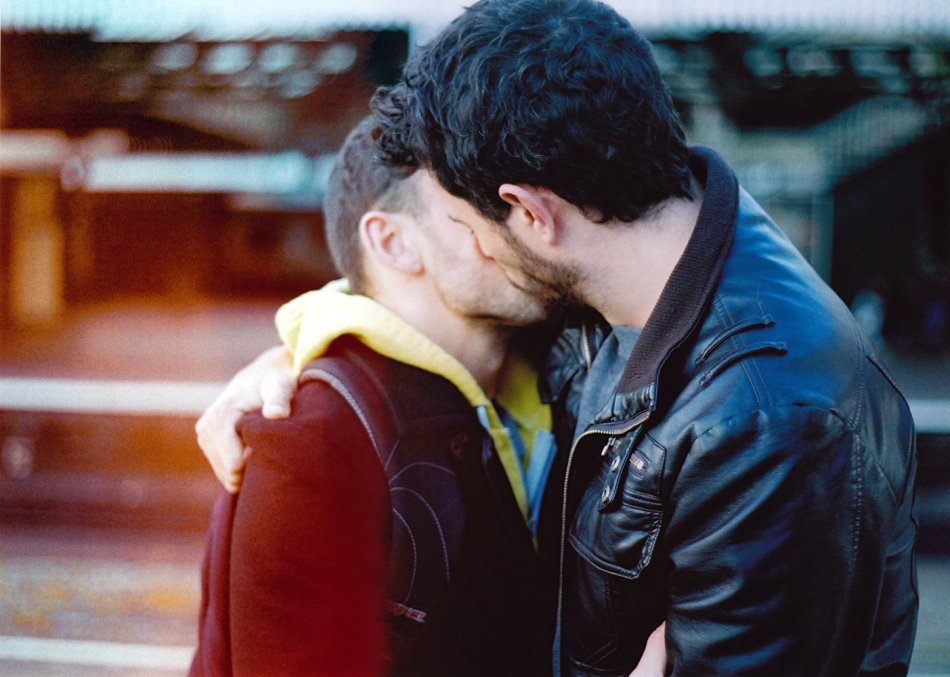 June is LGBT Pride Month and to celebrate the occasion we’ve gathered a number of films that either feature LGBT characters prominently or involve relevant themes to LGBT individuals such as gender identity and sexuality. We chose the titles based on their predominantly humanistic, and not alienating or caricatured, representation of LGBT characters and themes. As a result, you’ll notice the release years of these film skew towards recent decades.

No discussion centered around films for LGBT Pride Month would be complete without Donna Deitch’s landmark Desert Hearts. A film that paved the way for later LGBT films such as Brokeback Mountain and Carol, while also becoming recognized as the first positive cinematic portrayal of a lesbian romance, Desert Hearts is hard to not appreciate. Yet, it is even more than that as this is not just one of those influential films that has all of the foundation and daringness, but is difficult to truly enjoy thirty years after its release. Rather, Desert Hearts is a film that has stood the test of time in large part due to Deitch and her stars, Helen Shaver and Patricia Charbonneau. Shaver stars as a woman, Vivian, set to divorce her husband after 12 years of marriage. She is an honest person, refusing to slander her husband just to have grounds for a divorce. She admits that it just did not work and that she may very well live the rest of her life alone, always searching for what she clearly thought was missing in her marriage. Yet, she finds it rather quickly in the young Cay, portrayed by Charbonneau. In touch with her sexuality and no longer in the closet, Cay is upfront with who she is and what she believes that stems from an admitted fear that society will try to change her.

Set in the 1950s, Desert Hearts’ central romance comes with every bit of stigma one would expect. Characters flat-out admit that they are, “Out to lunch when it comes to queers.” Cay’s stepmother rejects her sexuality and kicks Vivian out of their home – Vivian had been staying there to establish residency for a divorce in Nevada – once she begins to suspect they are interested in one another. Every action they take puts their present situation in peril, especially Vivian who fears for her position as a “respected scholar” should she indulge in her feelings for Cay. Thus, she self-represses. Amidst the sea of to-die-for glances shared between the pair and the passionate romance they share that unlocks their hidden feelings, it is the self-repression that is the most moving element of Desert Hearts. One can see Vivian fight against her feelings, rejecting them, and even trying to push Cay away in order to stop herself from feeling the way she feels. However, she finally embraces her identity, and is a changed woman. It is in this element that Desert Hearts truly excels, as the issues of the 1950s are observed not just in the way society viewed sexuality, but in how individuals tried to fit into those views. Here are two women embracing who they are, having to overcome societal expectations, and finally being able to tap into that hidden realm of their identity that they refused to explore. Rather than being punished or ostracized, they are able to live as they please, receive a somewhat happy ending, and become more fulfilled as the film progresses. They throw caution into the wind and the result is this truly stirring and moving look at romance and sexuality.

When Virginia Woolf published Orlando in 1928 it was an extraordinary novel for the time, let alone when it was adapted into film by Sally Potter in 1992. Orlando follows the life of the titular character who is born a male in Elizabethan England and undergoes an inexplicable change of sex in adulthood and goes on to live over 300 years without aging. Tilda Swinton portrays the protagonist in the film and her performance and appearance are totally convincing. She displays the difficulty Orlando (later Lady Orlando) has in trying to find her place in the world and with feelings of infatuation and love. It is a performance that seems to have shaped Swinton’s career following this film as she has credibly taken on roles that an audience might have normally expect male actors to perform. A variety of scholars, including within transgender studies, have continued to study the novel ever since it was first published ninety years ago. Today the book and film have never become more relevant within the film industry with recent films like Tangerine and The Danish Girl bringing further attention to the transgender experience.

Mike Nichols’ The Birdcage is the hilarious 1996 remake of Edouard Molinaro’s La Cage aux Folles. The film stars Robin Williams and Nathan Lane as the proprietor and star, respectively, of a Miami drag club. The comedic thrust of the film comes when Val (Dan Futterman), the son of Williams’ Armond Goldman, reveals that he is engaged to the daughter of conservative “family values” Republican Senator Kevin Keeley (Gene Hackman). When a meeting between the two families is planned, the young couple withholds the fact that Val’s family has a gay, Jewish patriarch in the interests of appeasing the Senator. 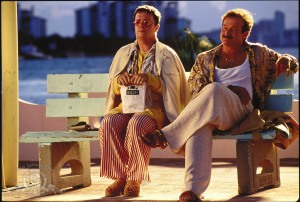 While the film certainly thrives on outrageous situations and the charming flamboyance of both Lane and Hank Azaria who plays the couple’s housekeeper Agador, its most memorable moments come when the viewer is reminded that true love is not dictated by an oppressive religious value set, but by genuine passion and companionship. The film is simultaneously sending a powerful social message while generating a constant string of laughs. The Birdcage harmonizes these ends of the tonal spectrum in its finale when Senator Heeley signals his acceptance of his daughter’s freedom while sneaking out of the club in drag in an effort to avoid the journalists who tracked him to South Beach.

A Single Man was the debut feature from fashion designer Tom Ford. Ford has shown his artistic talents as a filmmaker in his first two films, following this effort up with 2016’s Nocturnal Animals. Ford’s keen eye for style is evident in his films which even in tension and emotion never cease to be visually modern and beautiful. That said, he’s also shown the substantive voice of a more mature filmmaker.

The film follows George (Colin Firth), a college professor who has long been coping with the tragic death of his partner Jim (Matthew Goode). Struggling to overcome his grief, George plans to commit suicide. In the process of getting his affairs in order, he spends time with his friend Charley (Julianne Moore) and has a near-romantic encounter with one of his students named Kenny (Nicholas Hoult).

The film delves into the complexities of grief with no specific grand revelation. George processes his loss with near mundanity but with tremendous emotional weight. George’s experiences which lead to catharsis are not to say that a loved one can be forgotten but merely that life can be lived in the company of profound loss. The film’s finale packs an overwhelming emotional punch, but the real power is in the body of the film which is a testament to the realities of love and loss.

Not to be confused with Jean-Luc Godard’s film of the same name, Weekend is a bittersweet love story that falls under the mumblecore genre. The movie depicts the fleeting affair of two men, Russell (Tom Cullen) and Glen (Chris New), over the course of a single weekend. Personality-wise, the two couldn’t be more dissimilar. Russell is quiet and reserved about his sexuality, while Glen is free and unconcerned with how others judge him. We follow what begins as a drunken one night stand, and watch as their strong attraction to one another’s company blossoms into something impossibly intimate and special.

True to its mumblecore roots, the film’s dialogue is hyper-realistic, at times barely even understandable without subtitles, making it difficult to accept that a script is present at all. The realism lends a great deal of authenticity to Russell and Glen’s affair and allows their connection to leap across the screen at us. The film makes a nice contrast to Carol, which embraces its warm pauses and theatrical dialogue, and proves that both approaches to romance cinema can be potent when executed with proficiency.

In addition to being an effective love story, Weekend also has a great deal to say about the gay experience. Through Russell’s angst, the movie’s writing indicates a strong yearning for equal treatment of gay relationships in the public space. Homophobia is depicted in the film, but the individual offenders are never seen. Offhand comments of “queer” and “fag” can be heard from somewhere off screen, conveying the isolation that these characters must feel in their lives and furthermore emphasizing that tolerance of bigotry is an issue that concerns us all.

It’s hard to think of a more beautiful film- aesthetically and otherwise- to have come out of 2017 than Luca Guadagnino’s Call Me By Your Name, the same year that brought us such cinematic treasures as Blade Runner 2049, The Florida Project, and Phantom Thread. Captured in the sunny, colorful warmth of 35 mm, the film traverses the secret summer affair between 17-year-old Elio (Timothée Chalamet) and his father’s 24-year-old graduate assistant Oliver (Armie Hammer).

As much a romance as a coming of age film, Call Me By Your Name avoids much of the tropes of both. Elio and Oliver’s relationship develops naturally and at a relaxed pace. Though their relationship is homosexual and has an age difference, the film steers clear of potentially melodramatic roadblocks, choosing instead to focus purely on the love that binds them together. In this way, Call Me By Your Name stands apart from its contemporaries in Weekend and Carol, filling the unexplored void of depicting a gay romance in a film as naturally as a straight one would be. It’s incredibly refreshing to watch, and though 2017 was a phenomenal year for cinema, Call Me By Your Name is the only film of that year I know is sure to become a future classic.

BPM is a film that I will recommend to anyone whenever the opportunity arises. The film is a tour de force in empathy, love, and hope for a better future. The film is set during the 90s in France in the midst of the AIDS epidemic following the struggles that members of the civil rights organization ACT UP Paris face in losing loved ones, understanding the science behind AIDS research, and conducting productive protest efforts. The latter is a topic that is frequently discussed in meetings held by the organization that make up a fair portion of the film’s runtime, an anomaly in terms of what directors usually choose to show in their films. Even so, the meetings are where we see just how much perseverance the organization has and how much compassion its members have for each other and for those also compromised by insensitivity and ignorance. We see how those near the end of their battle with AIDS interact within the organization and how their suffering is truly felt by the community they are a part of.

Despite how draining BPM is to see, it is one of a very few films that I can earnestly say makes its audience better people merely through the act of watching. BPM stirs something within us and reminds viewers how it feels to be hopeful and ravenous for justice. To read more about the specific plot and characters of the film rather than this bird’s-eye view, click here to read my thoughts on BPM after seeing it at the Chicago International Film Festival.

0 comments on “LGBT in Cinema”