There seems to be a certain perception that so-called “elevated” horror (a stupid, vague term) is the superior form of horror because it apparently has something profound to say and is also shot stylishly, not at all with any of the cheap trickery associated with regular horror movies. While there may certainly be a difference between Midsommar and Friday the 13th: Jason Takes Manhattan, horror films don’t necessarily fall into these narrow distinctions. I mention this because I want to wrap my head around why the reviews of Tales from the Hood were so mixed. And I believe that the main issue was that director Rusty Cundieff believes (as I do) that subtlety is really overrated, especially in genre movies. 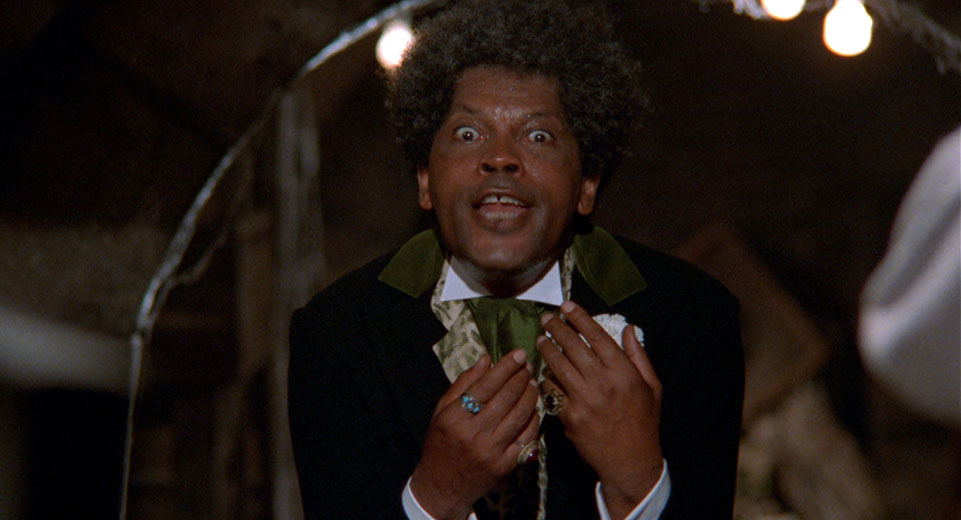 Cundieff was a stand-up comic and the first movie he directed was Fear of a Black Hat, a rap parody. He was encouraged by friend and eventual co-writer Darin Scott to turn his one-man show The Black Horror Show: Blackanthropy into a feature length movie. It should be a cliche that comedians understand horror quite well. Both comedy and horror rely on similar elements: timing, tension and release. When people were skeptical about comedian Jordan Peele making a horror movie, they clearly were not aware of or didn’t remember Rusty Cundieff, but of course, the creator of Get Out and Us sure as hell knew Tales from the Hood.

Tales from the Hood announces its intentions of being part Twilight Zone and part Tales from the Crypt from almost the very beginning. Three young Black men are going to the Simms funeral home to meet with Simms, who claims that he has drugs that he found in an alleyway and is willing to give to them if they come by the home. Once there, Simms (Clarence Williams III doing his best Vincent Price) regales them with tales that all center on issues that plague the Black community.

We should know almost exactly what we are in for just from Williams’ performance, which is a brilliant balance of camp and real menace. The first story out of four is ‘Rogue Cop Revelation’, where a young Black police officer named Clarence (Anthony Griffith) witnesses his fellow White officers intimidating a Black councilman Martin Ezekiel Moorehouse (Tom Wright) who wants to eliminate corruption within the police force. While the topic is obviously a heavy one and, unfortunately, too relevant even over two decades later, Cundieff goes for some broad strokes. While the policemen are beating Moorehouse, Billie Holiday’s ‘Strange Fruit‘ plays over the soundtrack, her infamous song about the lynchings of Black people in the South. The policemen are so obviously evil that one of them, when led to the grave by Clarence at the behest of a zombified Moorehouse, urinates on the grave. Yet just because Cundieff doesn’t mind getting some laughs from the broad strokes that he brushes with doesn’t mean that he is taking the issue of police brutality less seriously. By making the White officers so obviously villainous, he is turning the logic of oppression on its head; that is, it is easy for oppressors to see the oppressed as twisted monsters with no humanity, so it isn’t much of a stretch that the oppressed may see their oppressors in the same light.

Cundieff shifts tone quite abruptly with the next story, ‘Boys Do Get Bruised.’ Walter (Brandon Hammond) is a young, sensitive boy who transfers to a new school. A concerned teacher, Mr. Garvey, (Rusty Cundieff) soon notices bruises on his body. Walter also has a habit of drawing monsters, and soon, we find out that his drawings have power when he crumples up a picture of a monster that is his school bully and later his bully suffer spontaneous injuries. Upon a home visit, Garvey finds out that the monster that Walter has talked to him about is Walter’s father, Carl (David Alan Grier). Here, the cinematography is grim and unflinching, as we absorb the full impact of the violence that Carl wreaks upon both Walter and Walter’s mother Sissy (Paula Jai Parker). It is only towards the end does this story practice more of the typical horror elements, with a grotesque image of a crumpled up Carl. Out of the four stories, ‘Boys Do Get Bruised’ is the saddest and possibly the most personal for many people who have known domestic violence. 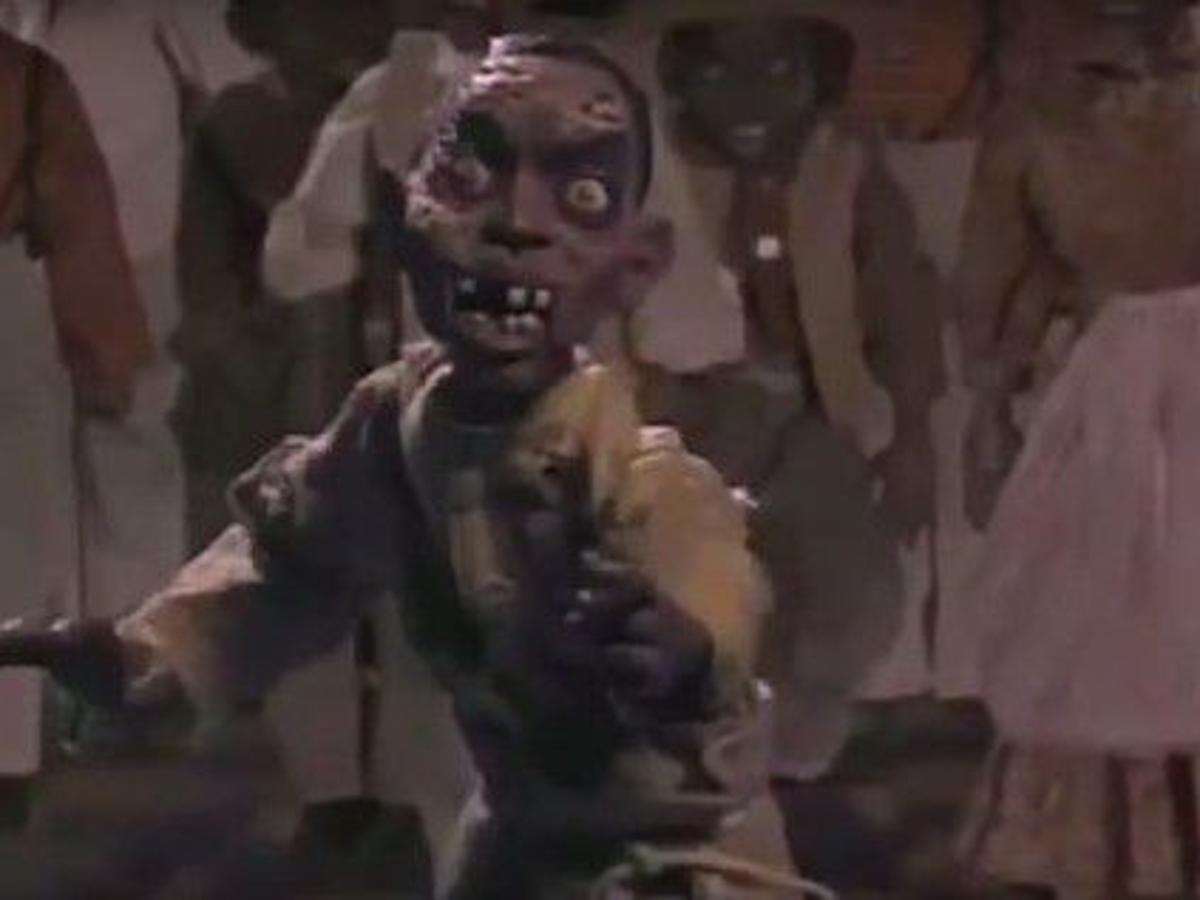 The next story, ‘KKK Comeuppance’ is perhaps the most obviously comical of these stories. Cribbed at least a little from the Twilight Zone episode ‘Living Doll’, ‘KKK Comeuppance’ follows a former Klansman named Duke Metger (Corbin Bernsen) who is running for reelection as senator on a platform of hate and exclusion to the great protest of Black and Jewish people. He has moved into a house that was a former plantation owned by his slaveowner ancestor. Apparently, the house is haunted by the ghosts of the Black slaves who were murdered by his ancestor, but a voodoo witch apparently transferred the souls of these slaves into dolls that were hidden in the house, though he has not found a single one of these dolls. Soon, however, a doll does start haunting him after his Black image consultant trips to his death in the house, on what we see is one of the legendary dolls. ‘KKK Comeuppance; is perhaps the least effective of the stories since we don’t really get a lot of reflection on the sins of the past that Duke refuses to apologize for. This story is a bit more concerned with moving its plot forward and getting to the “good” part (i.e. when the dolls attack). It’s ghoulish fun but not particularly scary or thoughtful.

The final story of the anthology gives a hint at a really trenchant and interesting artistic vision that Kundieff wouldn’t quite reach in his later work. ‘Hard-Core Convert’ follows. Crazy K (Lamont Bentley) is a hardened criminal and murderous psychopath who kills mercilessly and indiscriminately. When he guns down his rival, he is shot up by his rival’s gang, but the police come and shoot down his would-be killers. After serving some time in prison, Dr. Cushing (Rosalind Cash) offers Crazy K a chance to leave prison if he agrees to go through an experimental program meant to cure him of his murderous impulses. Cundieff definitely channels A Clockwork Orange with Crazy K’s deprogramming regimen, but the scene where Crazy K enters the sensory deprivation chamber to confront the ghosts of the people that he has killed (including a young girl and innocent bystanders) is a haunting, surreal nightmare that is quite different from anything we have seen in Tales. The term toxic masculinity is overused to the point that it’s just a buzzword, but Crazy K’s refusal to admit his wrongdoing or feel remorse is the worst manifestation of toxic masculinity, since he is so dedicated to the idea of being “hard” and not taking responsibility for the negative effects of his actions and attitude towards the world.

In Tales from the Hood, Rusty Cundieff managed to tackle issues that plagued (and continue to plague) the Black community, in a wildly entertaining but also thought-provoking way. His comic instincts served him well when he wants to create memorable characters and stories within short segments, and while some segments are more successful than others, altogether they provide a sharp insight to the concerns of Black culture at the time that still resonates today.