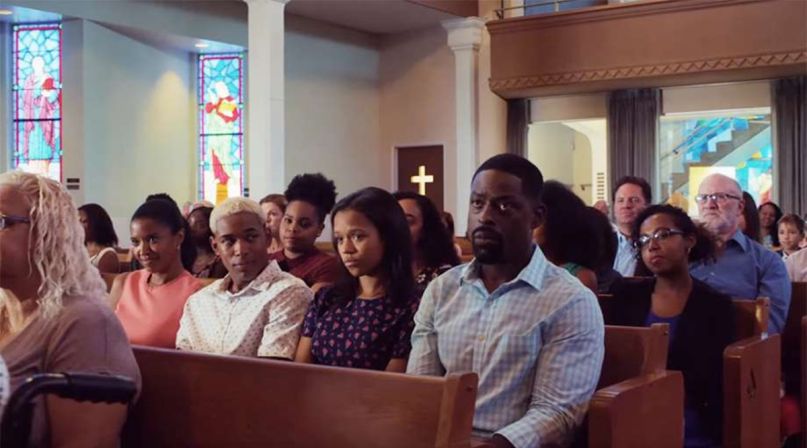 Waves marks a seemingly dramatic departure for Trey Edward Shults from his previous two features. Both Krisha and It Comes at Night could be characterized as family dramas about separation, even though the latter is filtered through a genre lens. Yet, at least for the first half of Waves, it seems that Shults has gone in a completely new direction.

Waves follows Tyler Williams (Kelvin Harrison, Jr.), a popular high school wrestler,  whose life starts to unravel as complication after complication endangers his seemingly bright future. For anyone familiar with Shults’ previous films, we know we are in for something vastly different from the first scene. Tyler and his girlfriend Alexis (Alexa Demie) are driving down a freeway, blasting music joyously. The camera rotates 360 in a seemingly impossible way, and that disorientation sets the visual and aural tone for the rest of the movie. It seems that Shults let Trent Reznor and Atticus Ross have free rein with the music since it is so loud and overwhelming, even sometimes in the scenes that don’t necessarily call for a pulsating soundtrack. Shults also seems to have taken more than a few cues from another prominent modern film set in Florida – Spring Breakers, especially in its portrayal of some of the decadent parties where some major scenes take place. In fact, Harmony Korine makes a small cameo here.

The cinematography and music tend to overwhelm a very strong performance by Kelvin Harrison, Jr. who displays both physical and emotional pain so well. Harrison may be cornering the market on young, seemingly perfect men who are skillful at hiding major flaws about themselves. Yet even Harrison isn’t charismatic enough to make the audience focus on him when the other elements of this film are working overtime. It isn’t until we get to the second half of the film, when the focus shifts to Emily (Taylor Russell), Tyler’s sister, that the soundtrack diminishes considerably, and the cinematography becomes less frenetic. Even here though, Shults doesn’t quite escape paying homage to his influences, since the second half of the movie feels and looks like a film of Terrence Malick’s, especially when it lingers lovingly on the beautiful South Florida landscape. As one might have guessed, Shults worked as an intern on Song to Song, Voyage of Time, and The Tree of Life.

Yet it is also in this second half that Shults starts to put more trust in his actors and in his inclination for simple storytelling, which had been the strengths of his previous two films. Both Russell and Lucas Hedges, who plays Luke, her boyfriend and Tyler’s former wrestling teammate, give lovely performances as shy, uncertain lovers who are trying to deal with the immense pain that the men in their lives have dealt them. Sterling K. Brown as Emily and Tyler’s father, Ronald, gets to show more range when he works hard to atone for the sins of his former alpha male persona when he tries to connect with Emily, whom he knows he has neglected in favor of his son. Unfortunately, Catherine (Renee Elise Goldberry), Emily and Tyler’s stepmother, doesn’t get the same redemption, though she turns in a fine performance as well in the first half of Waves. The story becomes much more tender and profound with its focus on healing and forgiveness, which is jarring, considering how angry and over-stylized the first half was.

Waves feels like a first film from a promising filmmaker, rather than a third, more mature work. Shults was clearly going in a different direction with Waves rather than playing it safe (though his first two films could hardly have been characterized as safe, sensible choices either). While the second half of Waves is definitely stronger than its experimental first half in terms of its storytelling, the first half indicates that Shults still has a lot to offer and that one can anticipate great prospects for his future films.